Assassination of Samuel Paty: a "Francocide", according to Zemmour

This crime was "not a news item, an accident or the act of a madman" but "a Francocide, the death of a Frenchman because he is French", launched the former presidential candidate ( 7%) in front of hundreds of supporters in the square Samuel-Paty, opposite the Sorbonne, in Paris. 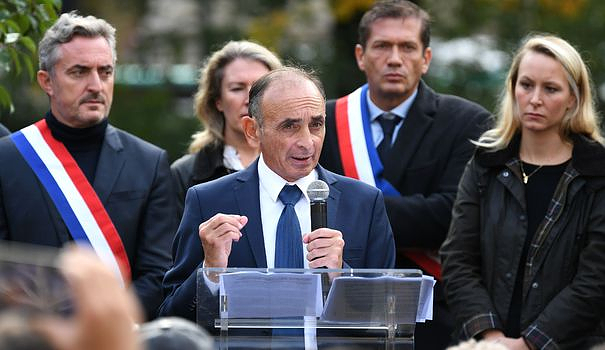 This crime was "not a news item, an accident or the act of a madman" but "a Francocide, the death of a Frenchman because he is French", launched the former presidential candidate ( 7%) in front of hundreds of supporters in the square Samuel-Paty, opposite the Sorbonne, in Paris.

"It's a crime worthy of a country at war, which reminds us of the ancient wars of religion and the war in Algeria," said Eric Zemmour.

This attack, thundered the far-right leader, is part of a "continuum of violence": "Here it's a beheading but every day there is spitting, insults, (...) assaults, thefts, rapes ". In his eyes, it is a "change of people and civilization", a "great replacement" which results in "chasing the French" from "their old land of France, Catholic for 1,500 years".

This crime was "preventable" by applying several measures, he added: "Refusing asylum to people suspected of being dangerous", "Tackling places of worship propagating hatred" by closing them, or even "remove social assistance" to parents whose children have "pressured teachers".

While incidents related to the wearing of religious symbols at school increased in September, Mr. Zemmour pointed to "a vast offensive" which is "not the reflection of a simple fashion" but "the expression of a conquest of a space by a culture, a religion, a civilisation".

Before him, Marion Maréchal, vice-president of Reconquête!, denounced the "no vaguism" at school in the face of "a problem of immigration, demography, assimilation".

Senator Stéphane Ravier pinpointed a rise in "communitarianism": "It's very good that the Islamists live among themselves, personally I am in favor of it, but if they want to dress like in the bled, let them go back to the bled!”, he launched to applause.

The Minister of National Education, Pap Ndiaye, will be present at the Sorbonne on Saturday afternoon alongside Mickaëlle Paty, sister of the teacher, for the presentation of the first Samuel Paty prize, organized by the Association of teachers of history-geography (APHG).