Casa Garcia de Viedma de Armilla will host the second edition of the 'Alley of Magic. 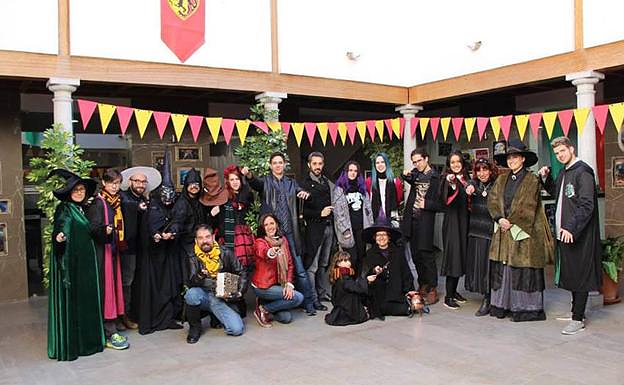 Casa Garcia de Viedma de Armilla will host the second edition of the 'Alley of Magic.' This event will bring together fans of the magical realm, as well as those who are interested in the stories of Harry Potter and J. K. Rowling. After its December debut, this will be its second edition. It was attended by many curious people and fans who enjoyed several days of fun.

The first and second weekends of April will offer magical narrative fans the opportunity to "prepare your wands" to enjoy several days of games and activities that "discover your hidden talents." Participants will have the opportunity to participate in multiple workshops, contests, leisure activities, and other surprises related to magic world.

This magical meeting featured events such as a market and a magical escape area, as well as visits from professional cosplayers, Daedalus, and other conferences with public participation. There was also a gymkhana, trivia, and various workshops. In the coming days, the poster and schedules for each activity will be posted.

The event will be held in the morning as well as in the afternoon on Saturday, April 6. On Sunday, activities will only be offered in the morning. On the following weekend, guests will have access to 'Alley of Magic’ on Friday afternoon, Saturday morning, afternoon, and Sunday morning.

The first activity, a poster contest that would be the announcement work for the new edition, was announced in February. A competition was held for stories that were written by children or teens and set in the Harry Potter narrative world. These texts were based on the films, books, and play. They were presented up until March 20. The podcast El Archivo de Coruscant will organize the meeting. During the meeting, the winners of each category of the narrative contest are announced.

Casa Garcia de Viedma can be found in Plaza de la Aurora in Armilla. It is easily accessible via the Metropolitano de Grannada. The Agora Comic alternative entertainment shop organized this meeting. It was commissioned by the City Council's Department of Culture. The cultural association Maquinistas del Tiempo, FicZone and El Archivo de Coruscant are also involved in the organization.

‹ ›
Keywords:
ArmillaAbriraPuertasMundoMagicoAbrilGraciasEncuentroCallejonMagia
Your comment has been forwarded to the administrator for approval.×
Warning! Will constitute a criminal offense, illegal, threatening, offensive, insulting and swearing, derogatory, defamatory, vulgar, pornographic, indecent, personality rights, damaging or similar nature in the nature of all kinds of financial content, legal, criminal and administrative responsibility for the content of the sender member / members are belong.
Related News