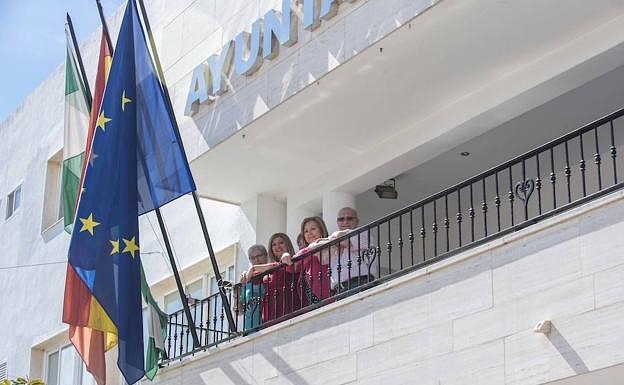 Armilla City Council celebrated Europe Day. This year, the slogan is 'choose you future'. The residents of the city were the protagonists of this day. Loli Canavate (Mayor of Armilla), the Councilor for Equality and Elderly and the Ladies of Loreto Associations were among the representatives of the Board of Directors of the Home for the Elderly.

Loli Canavate, the mayor, spoke out about "the importance and necessity of European policies" as well as the fact that elections to the European Parlament will take place in just a few weeks. Sources from the Consistory reveal that the European Union has given Armilla City Council, in the framework of Feder Funds, more five million euros. This will allow the Dusi Strategy to become a reality. It is the Armilla for the future.

European funds have helped to improve services such as the creation of a skate track and the expansion of the Municipal Library. The City Council explained that they have been able to assist with other projects, including education, training, and job placement for youth and other vulnerable groups, as well as in metropolitan infrastructures, educational spaces, and other areas, which are possible because of funding from the European Social Fund or the European Regional Development Fund>>.

‹ ›
Keywords:
ArmillaCelebraEuropaAsociacionesLocalidad
Your comment has been forwarded to the administrator for approval.×
Warning! Will constitute a criminal offense, illegal, threatening, offensive, insulting and swearing, derogatory, defamatory, vulgar, pornographic, indecent, personality rights, damaging or similar nature in the nature of all kinds of financial content, legal, criminal and administrative responsibility for the content of the sender member / members are belong.
Related News