Arizona, plagued by suspicion for the midterm elections

"It's a deterrent," the 78-year-old retiree tells AFP, pointing to their small cameras pointed at the ballot box, while a gun holster protrudes under his down jacket. 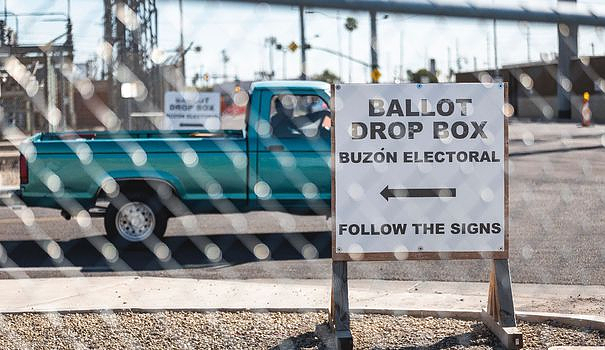 "It's a deterrent," the 78-year-old retiree tells AFP, pointing to their small cameras pointed at the ballot box, while a gun holster protrudes under his down jacket.

"We are really here to discourage people who come to stuff the boxes with (fake) ballots", assures Nicole, another 52-year-old retiree, who refuses to give her name, hidden behind her mask, her sunglasses and her cap.

On a mission to "save the Republic", the trio is convinced that the 2020 presidential election was rigged in the United States, and that Donald Trump should have been re-elected against Joe Biden.

The latter won by barely 10,000 votes in Arizona. Usually Republican, the state had never voted for a Democratic president since Bill Clinton.

Regardless of the multiple investigations that concluded that there was no electoral fraud, the certainty of the three watchmen remains absolute. Likewise, they stubbornly maintain that "the Earth is flat" and that man "has never been to the Moon".

For the past few days, tension has been rising dangerously around this lonely electoral box outside the Mesa Children's Court, near Phoenix.

Friday, the sheriff intervened to evacuate two armed men in paramilitary uniform – it is legal in Arizona to carry a firearm – who came to the orderly in front of this symbol of democracy.

Several people have filed complaints: some suspect a pressure campaign coordinated by a group of self-proclaimed "patriots", "Clean Elections USA". The police presence has been reinforced and Maricopa County authorities are trying to calm things down.

“While the monitoring and transparency of our elections is critical, voter intimidation is illegal,” they said in a statement on Monday, inviting skeptics to register with a party to monitor the integrity of the ballot.

But the gear seems launched. In the parking lot, Kevin Smith saw fit to come with his guard dog in the front seat of his pick-up.

"I came to watch the lookouts (of the box), and see how they react to intimidation", loose this fifties, rather indignant.

Faced with the ambient paranoia, few voters still dare to come and vote on this open-air site. Apart from Kristin Wilde, who braved the risk without being aware of it.

"It's weird," she breathes. "I've already filled out my ballot, so I'm not going to change who I voted for. But if I had known about the guns, I wouldn't have come here."

"The tension around this election is unprecedented," said Gina Woodall, a political scientist at Arizona State University. The complex mid-term ballot, during which the Americans renew the Congress and the Senate as well as myriads of local elected officials, usually generates much less interest than the presidential one, she recalls.

But in Arizona, the staff of the Republican Party has embraced conspiratorial theses since the narrow victory of Joe Biden.

Its three candidates for governor, senator and secretary of state are still vigorously contesting the results, even after the local Senate's controversial hiring of an audit firm. Cyber ​​Ninjas, which had no electoral experience, could only confirm the Democrat's victory in Maricopa County.

In the United States, about 70% of Republican voters continue to believe, against all evidence, that the current tenant president is illegitimate, according to several polls published in recent months.

It was in this atmosphere of general mistrust that the Maricopa County Elections Department began counting the mail-in ballots on Monday.

“We have received an increasing number of threats against election workers,” acknowledges its communications director, Megan Gilbertson.

In her building in central Phoenix, besieged by dozens of protesters in 2020, the official insists on the integrity of the electoral process. Beyond the 16 machines responsible for reading the ballots and filmed 24 hours a day, all handwritten entries are checked by a couple of observers, made up of a Democrat and a Republican.

This year, many of them are newcomers. And if most attest that the operations are taking place correctly, some remain tirelessly skeptical.

"I only see part of the voting process," a new Republican observer told AFP, requesting anonymity. "What happens before and after, I don't know."