"Apocalypse": desolation in a Sudanese village affected by floods 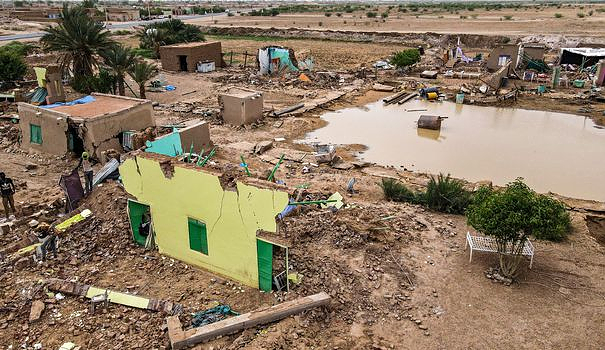 "It looked like the apocalypse", says Mr. Tigani, whose house in the state of the Nile (north-east) was swept away in a few hours by the floods caused by the torrential rains which recently fell on the country .

"It's been years since we've seen rains and floods of this magnitude," adds the 53-year-old Sudanese, who rushed to save what was left of his house after the floods broke. are removed from their village.

He is looking for anything that can be salvaged to build a new home for his son and his pregnant wife.

The rainy season usually occurs in Sudan between May and October, causing severe flooding that damages homes, infrastructure and crops.

This year, some 80 people have died and tens of thousands of homes have been destroyed or damaged in these floods, according to official figures.

On Sunday, authorities even declared a state of emergency in Nile State and five other states.

Like Mohammed, other Makaylab residents are scrambling to recover their belongings or anything that could help them rebuild their homes. Everything is good, even broken wood, but some are unlucky.

"We are trying to find something, but everything is destroyed," laments Haidar Abdelrahman, sitting on the pile of rubble that remains of his house.

Mr. Abdelrahman also fears that the stagnant water in the puddles will bring with it its share of insects and diseases.

“People are afraid that heavy rains will bring scorpions, snakes and other problems,” he says.

"People are in serious need of help against insects and mosquitoes," such as insecticide sprays, said Seifeddine Soliman, 62.

Yasser Hachem, official of the Ministry of Health, wants to be reassuring.

According to him, "the authorities have launched insecticide spraying campaigns to prevent the proliferation of mosquitoes," he told AFP.

The authorities have the situation under control "so far", he adds. According to him, of the approximately 3,000 inhabitants of Makaylab, the health authorities only received a few cases a day of people suffering from diarrhoea.

In the meantime, many residents are on the streets.

After the destruction of their homes, "people have no place to go", alarms Mr. Abdelrahman.