Another A45 viaduct in the Sauerland will be blown up

As part of the bridge renovations on the A45 in Sauerland near Wilnsdorf near the Hessian state border, another bridge was blown up on Sunday (10 a. 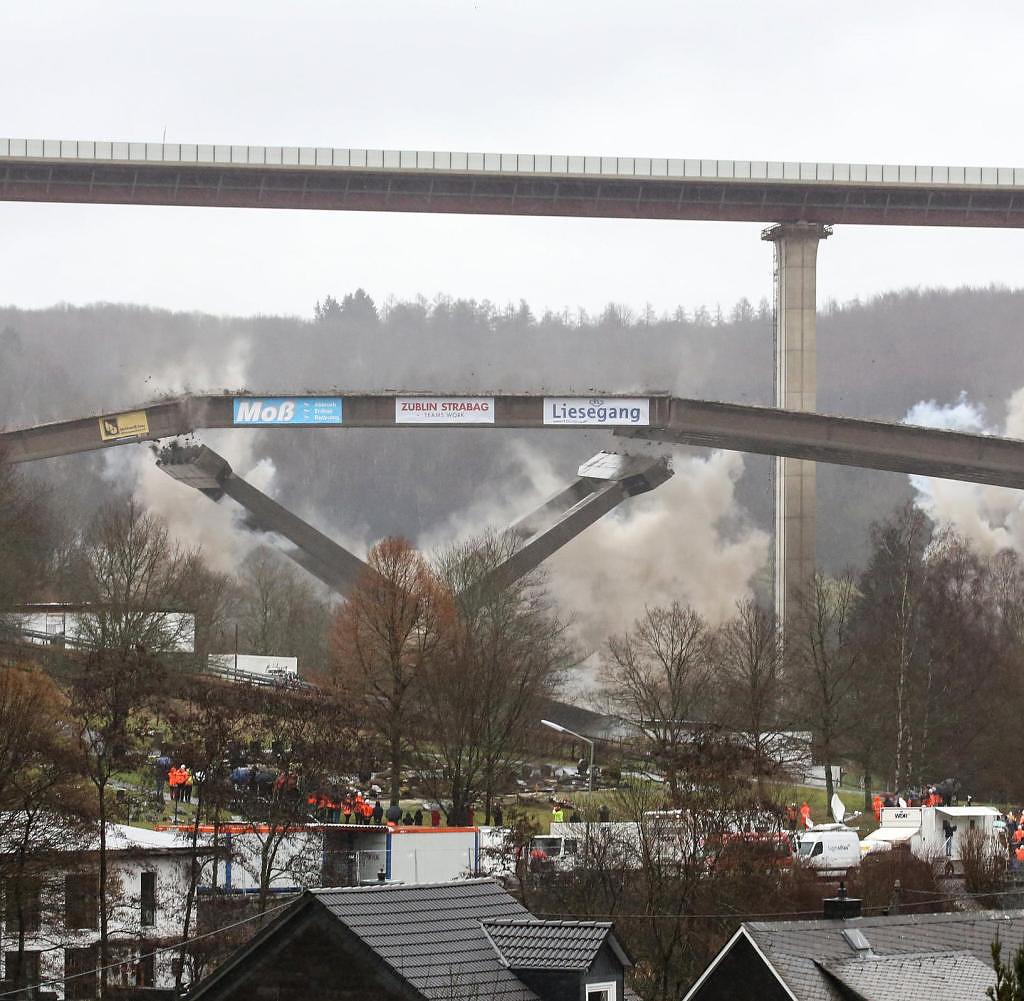 As part of the bridge renovations on the A45 in Sauerland near Wilnsdorf near the Hessian state border, another bridge was blown up on Sunday (10 a.m.). The section of the Landeskroner Weiher viaduct in the direction of Dortmund is 377 meters long and up to 36 meters high. On the day of the blast, the A45 will be completely closed between the Wilnsdorf and Haiger-Burbach junctions from 8 a.m. to 2 p.m.

Preparations for the demolition have been underway since the end of August. It is to be carried out with almost 100 kilograms of explosives, as announced by the Westphalia branch of Autobahn GmbH. The bridge is to fall on a so-called fall bed, for which 7,600 cubic meters of earth had to be moved beforehand. The partial structure leading parallel to the south must not be damaged by the vibration.

On the day of the blast, a cordoned-off zone with a radius of 300 meters will be set up around the bridge at Landeskroner Weiher. Due to the impassable terrain, it is said to be difficult for onlookers to follow the blast on site. That's why Autobahn Westfalen puts a video on its website afterwards and keeps interested parties up to date via their social networks.

The viaduct was built in 1967. It consists of eight axes, each with four pillars. Two of these axes are located in the Landeskroner Weiher itself. The water in the small reservoir at the foot of the Kalteiche had to be drained beforehand.

The expansion of the so-called Sauerland line is one of the largest construction projects on North Rhine-Westphalian motorways. There are 60 viaducts along the entire A45 route, which are to be renewed bit by bit. The Rinsdorf viaduct on the A45 between Wilnsdorf and Siegen-Süd was only blown up in February. The closure of the dilapidated Rahmede bridge near Lüdenscheid on the important north-south traffic axis, which has been in place for almost a year, is causing serious problems. It also has to be blown up – an exact date for this has not yet been set.

‹ ›
Keywords:
TexttospeechWilnsdorfLandeskroner WeiherSauerlandDortmundA45SauerlandlinieTalbrücke RinsdorfAutobahn GmbHWestfalenLüdenscheidRahmedeKrimi
Your comment has been forwarded to the administrator for approval.×
Warning! Will constitute a criminal offense, illegal, threatening, offensive, insulting and swearing, derogatory, defamatory, vulgar, pornographic, indecent, personality rights, damaging or similar nature in the nature of all kinds of financial content, legal, criminal and administrative responsibility for the content of the sender member / members are belong.
Related News