Like this 30-year-old, there are dozens of parents and grandparents offering children a fifteen-minute pony ride in Parc Monceau or the Jardin du Luxembourg, for around ten euros. 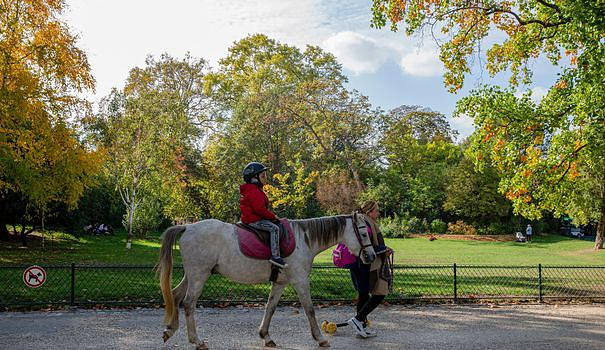 Like this 30-year-old, there are dozens of parents and grandparents offering children a fifteen-minute pony ride in Parc Monceau or the Jardin du Luxembourg, for around ten euros. A ritual accessible every Wednesday and every weekend.

But for months, Paris Animals Zoopolis (PAZ) has been protesting against these walks in place since 1992, "in the name of defending the interests of animals" and to put an end to "the idea that animals are toys".

“We would like the town hall of Paris to ban these walks from another time”, specifies Amandine Sanvisens, co-founder of the association born in 2017.

"The ponies do not systematically have access to hay and water, they do not benefit from sufficient break times and endure far too long transport times".

The question came to the Paris Council this week, prompting Christophe Najdovski, deputy in charge of animal welfare, to make an appointment in the spring of 2023 "to discuss the activities of ponies in Paris", conceding that he "There is still room for improvement".

Dominique Reveryon, retired accompanying her four-year-old granddaughter, assures for her part "to be very vigilant for the well-being of animals", while wishing that we can "preserve this Parisian tradition".

In Paris, for almost 30 years, the main player in the market has been Animaponey, with its 80 animals that live the rest of the week free in the Chevreuse valley.

"The reason for a pony, once raised and trained, is to have a use in the service of childhood. We know very well that it is not a toy", says Stéphane Michaud, head of Animapony in reply to PAZ. "This association harasses us, wanting to deprive these kids, city dwellers, of a unique experience with animals".

"PAZ is the only critical and active association" to make such requests, assures Mr. Michaud, "far from the real respectable and historical animal protection associations, such as the SPA or the Brigitte Bardot Foundation".

Thursday, the City of Paris recalled that it is "one of the first cities to have adopted an animal welfare charter" in 2021.

This text, supposed to improve the supervision of the activity, notably reduced the authorized transport time to two hours, shortened the time on site and regulated the length of the lanyards.

"If the sector does not adapt, we will draw the consequences", assured the deputy in charge of the animal condition in Paris, whose services carried out "24 checks in its parks and gardens before and during the summer last, in particular to ensure that hay and water are available to the animals".

These measures do not convince PAZ - also committed to the defense of rabbits, rats and pigeons in Paris - for whom "the problems persist". According to the association, the town hall "gives the illusion that it is concerned about the animal condition with some changes to the facade".

“Panic by the situation”, Mr. Michaud considers the situation untenable. "PAZ put doubt in people's heads, without ever discussing with us. We know our job, our ponies are pampered," he defends himself to AFP. "We accepted this charter to survive, but the conditions - especially around transport times - are untenable".

The operator assures that he is not far from throwing in the towel. "With the loads exploding and the clientele decreasing, without new discussions with the town hall, the interprofession and the operators, I will stop my activity at the end of the year".