In power since the country's independence from the Portuguese Empire in 1975, the Popular Movement for the Liberation of Angola (MPLA) is the favourite, according to forecasts. 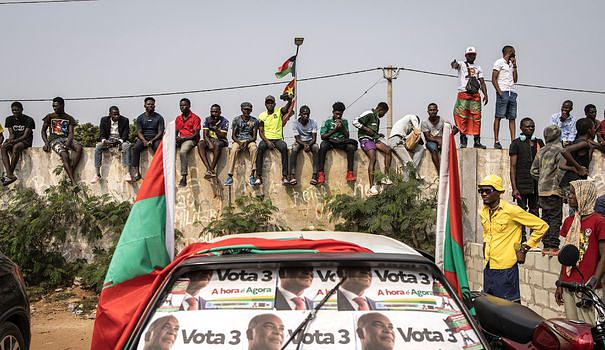 In power since the country's independence from the Portuguese Empire in 1975, the Popular Movement for the Liberation of Angola (MPLA) is the favourite, according to forecasts. Outgoing President Joao Lourenço, 68, is seeking a second term.

The score achieved by an opposition reinvigorated in recent years by its leader, Adalberto Costa Junior, 60, nicknamed "ACJ", will be particularly observed.

At the head of Unita, the first opposition party, Mr. Costa Junior led his campaign on promises of reform, the fight against poverty and against corruption.

Reputed to be a good speaker, he embodies for some this hope for "change" demanded by the street, in a country rich in oil but plunged into great economic difficulties.

"I earn about 1,200 kwanzas a day (2.80 euros), not enough to live on. Everything is expensive, prices are rising and we earn crumbs," said Gabriel, 37, a resident of the capital Luanda interviewed by the AFP. A large part of the population lives below the poverty line.

The opponent also appeals to urban youth, less attached to the MPLA than their elders and who inherit a country plagued by decades of corruption under the presidency of José Eduardo dos Santos (1979-2017).

Died last month in Spain, the former head of state is accused of having embezzled billions for the benefit of his family and loved ones.

Those aged 10 to 24 represent a third of the population, according to United Nations data.

"There is no democracy with a single party in power," castigated Mr. Costa Junior on Monday during a meeting in Luanda. Calling on his supporters to go to the polls, he urged them "not to fear alternation".

"The margin will be smaller than ever," said Eric Humphery-Smith, analyst at British firm Verisk Maplecroft.

But with a ruling party that controls the electoral process and the public media, the opposition and part of public opinion are wondering about the possibility of fraud. Social networks have recently relayed cases of deceased voters yet registered on the electoral lists.

In 2017, Joao Lourenço was elected with 61% of the vote, with the label of designated dolphin of dos Santos. After his election, he quickly distanced himself, launching a vast "clean hands" operation to everyone's surprise and dismissing those close to his former mentor from key positions.

The current president intends to win thanks to his record of the past five years: in an oil-dependent economy in severe recession, he launched ambitious reforms, hailed abroad, to diversify sources of income and privatize companies public.

“We created and restructured our economy,” he said at a rally last weekend.

The repatriation of the body of José Eduardo dos Santos, a few days before the election, could also favor the outgoing president, although opinions on the legacy left by the former head of state, who reigned unchallenged for 38 years, are not unanimous.

Polling stations will be open from 7 a.m. (6 a.m. GMT) to 6 p.m. (5 p.m. GMT) for the 14 million registered voters. Eight political parties are running in total. The candidate of the winning party in the legislative elections will be invested as Head of State.

The results are expected a few days after the poll is held, but the deadline may be extended in the event of a dispute.