Angler fishes 30-pound goldfish out of a lake

Andy Hackett managed the catch of his life: The 42-year-old Brit was able to catch a goldfish weighing around 30 kilograms from the water of Bluewater Lake, a fish pond in the French town of Putteville in Champagne. 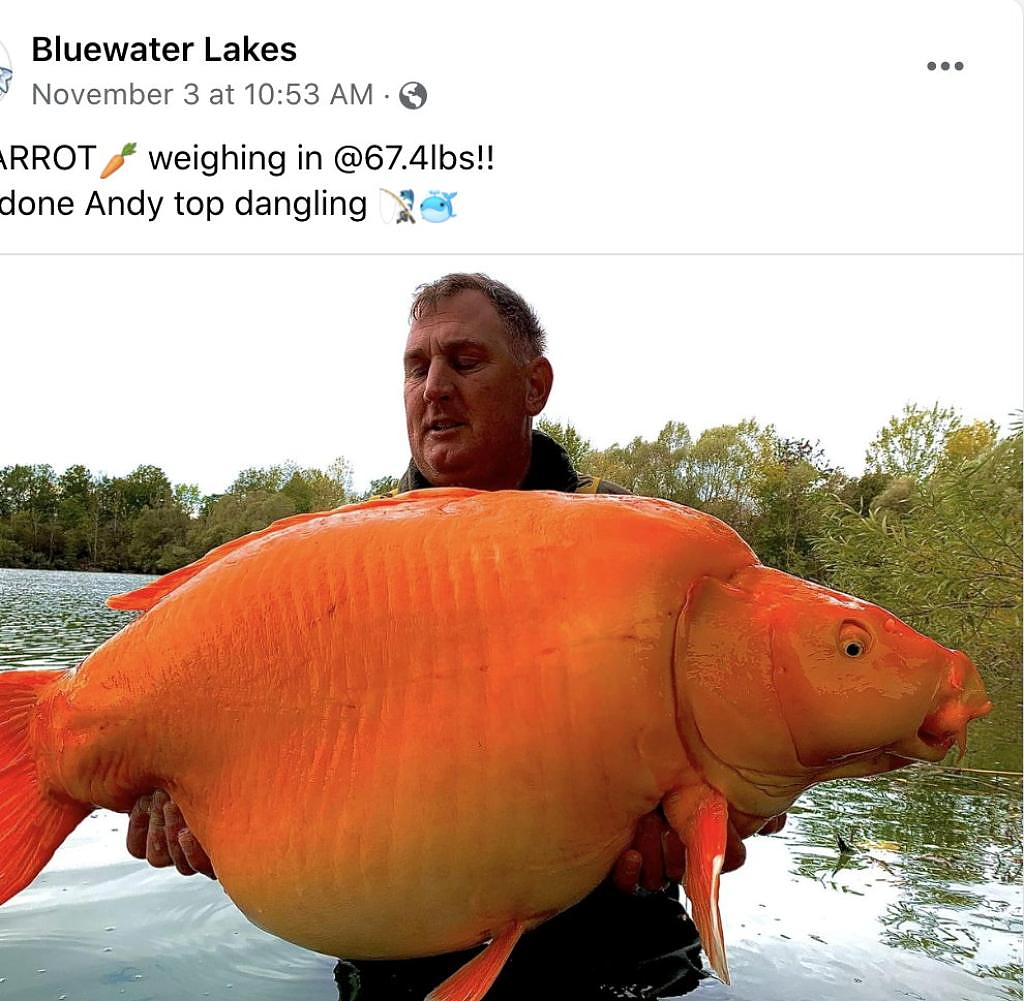 Andy Hackett managed the catch of his life: The 42-year-old Brit was able to catch a goldfish weighing around 30 kilograms from the water of Bluewater Lake, a fish pond in the French town of Putteville in Champagne. The example is considered to be one of the largest and heaviest in the world.

It took just 25 minutes for the fish to bite, he told the British tabloid Daily Mail. A goldfish pulled out of the water by an angler in Minnesota, USA, in 2019 was previously thought to be the largest of its kind in the world. He is said to have weighed almost 17 kilograms.

Of course, goldfish are not native to the French lake, quite the opposite. However, the huge carp was not unknown there: Due to its bright orange color it was nicknamed “Carrot”, i.e. “carrot”, and for years it was considered a challenge for all sport fishermen on the lake because it was difficult to hook .

Bluewater Lake fishery operator Jason Cowler said the goldfish was released here long ago. “We introduced Carrot to the lake about 20 years ago so that our customers could fish something different. Since then it has grown and grown.” According to the Daily Mail, the animal is said to be a cross between a leather carp and a koi carp.

Only now did Hackett, who wanted to relax fishing on the lake in France, manage to catch Carrot. "It was awesome to catch him, but it was also pure luck," he told the Daily Mail. Of course, the unique goldfish didn't end up in the cooking pot. Shortly after his lucky catch, Hackett put the fish back in the water.

Depending on the breeding form, the ornamental fish in the aquarium can be a maximum of 35 centimeters long and weigh up to one kilogram. They have a life expectancy of around 40 years. According to Jason Cowler, the significantly heavier Carrot is still in good health and could live in the lake for many more years. But how could it happen that the goldfish assumed such dimensions?

The fish has hardly any natural enemies in the wild and can find food unhindered. In addition, goldfish are real survivors: They are considered to be extremely robust and resilient. In winter, they can survive in frozen waters and get by for months with little oxygen. That probably also played into Carrot's cards.

By the way: If you keep a goldfish at home, please never give it the idea of ​​releasing it somewhere in the wild in a lake or river.

Because otherwise it could become a real problem for an entire ecosystem:

‹ ›
Keywords:
MusikFischereiFischeKmpktDaily MailAngelnChampagneGoldfischRekorde Im TierreichBluewater LakeAndy HackettPuttevilleCarrot
Your comment has been forwarded to the administrator for approval.×
Warning! Will constitute a criminal offense, illegal, threatening, offensive, insulting and swearing, derogatory, defamatory, vulgar, pornographic, indecent, personality rights, damaging or similar nature in the nature of all kinds of financial content, legal, criminal and administrative responsibility for the content of the sender member / members are belong.
Related News