Angeles Orantes-Zurita is the CEO of Industrias Carnicas Zurita, and La Cueva de 1900. 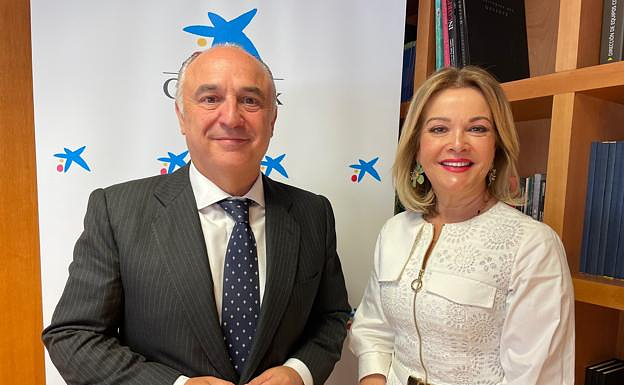 Angeles Orantes-Zurita is the CEO of Industrias Carnicas Zurita, and La Cueva de 1900. She was selected for her leadership, career and strategic vision as the winner for the 'CaixaBank 22 Woman Entrepreneur Awards'. This award, presented by the Eastern Andalusia Territorial Directorate, recognizes the talent, professionalism, and connections between the top businesswomen around the globe.

She graduated in law from University of Granada and has a master's in Business Management and Administration (ESADE) and International Trade (Madrid School of Organization). Angeles Orantes-Zurita was a child who became interested in the family business on Calle San Jeronimo that her parents owned. She learned the trade that would be the basis for Industrias Carnicas Zurita.

Orantes-Zurita was selected as the territorial winner. She will be part of the "CaixaBank Women In Business Community", a virtual group that operates through a private LinkedIn space. It is a place for sharing ideas, knowledge and experiences and also a point of contact to build professional relationships between award-winning managers.

The Community already boasts more than 60 members. It also provides exclusive experiences such as forums and debates and national and global events. This community wants to help women in business develop and lead.

Juan Ignacio Zafra is the regional director of CaixaBank in Eastern Andalusia. "The 'CaixaBank Women in Business Awards,' which are celebrating their sixth edition, were consolidated in recent decades by their commitments to business excellence, equality opportunities, and diversity, which have been fundamental pillars of the entity." We are proud to acknowledge the leadership and professional achievements of these women leaders, as we do every year.

After the territorial phase, the award jury, which is made up of executives and directors from CaixaBank will select the national winner. He will succeed Ines Juste, president and founder of Juste Group; Rocio Hervella who founded and CEO of Prosol; Arancha Menzanares, Vice-President of Ayesa; Lina Mascaro president of Grupo Mascaro and Pilar Martinez Cosentino Vice President of Cosentino Group. All of these women were national winners of the'saBank Women in Business Awards.

International Women's Entrepreneurial challenge (IWEC) is a network of businesswomen who support ownership of businesses and collaborate globally through chambers and business organizations in order to connect and develop female leadership. It is based in New York.

The IWEC awards are presented every year in the context of the Annual Conference. They recognize and support female entrepreneurs from around the globe. The IWEC awards, among other things, aim to raise the visibility of women entrepreneurs so they can play an important role in the development and growth of the 21st-century global economy.

After two years of virtual conferences, the IWEC Awards will be presented this year in Madrid, November 13-15. This meeting will bring together many great people from the global business community.

IWEC was established in 2007 and has since awarded 460 businesswomen to 47 countries. These businesswomen run 295 416 jobs and generate an average turnover of more than 41,000 million dollars.

‹ ›
Keywords:
AngelesOranteszuritaGanadoraFaseTerritorialPremiosMujerEmpresariaCaixaBank2022AndalucíaOriental
Your comment has been forwarded to the administrator for approval.×
Warning! Will constitute a criminal offense, illegal, threatening, offensive, insulting and swearing, derogatory, defamatory, vulgar, pornographic, indecent, personality rights, damaging or similar nature in the nature of all kinds of financial content, legal, criminal and administrative responsibility for the content of the sender member / members are belong.
Related News