Santiago Alfonso, a Santiago Alfonso Vice President of Communication and Corporate Reputation and Andres Garcia Ibanez, a painter and sculptor, is representing the Ibanez-Cosentino Foundation. 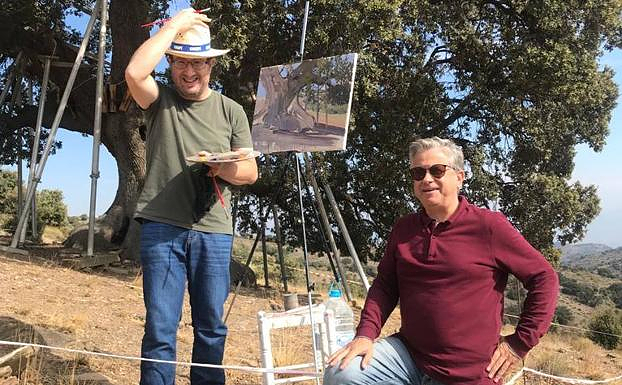 Santiago Alfonso, a Santiago Alfonso Vice President of Communication and Corporate Reputation and Andres Garcia Ibanez, a painter and sculptor, is representing the Ibanez-Cosentino Foundation. They collaborated with the crowdfunding campaign started a few months back by the association 'Monumento Natural Encina la Peana to save the specimen, which rests in Seron.

Alfonso and Ibanez traveled to the area of the magnificent tree to capture the beauty and grandeur of the holm oak. The painting was created by Almeria artist with the goal of allocating funds from the auction for conservation. The oak provided a visual spectacle for both the director and the painter. It is surrounded by lush vegetation and fauna, which makes it a very special setting.

The Ibanez Cosentino Art Foundation was established in June 2005 by Andres Garcia Ibanez (the museum's founder) and the multinational Cosentino, based in Almeria.

The 'Monumento Natural Encina la Peana association, for its part, is a non-profit organization whose goal is to save the thousand-year-old tree, which was declared a Natural Monument of Andalusia, from certain death.

There were many people involved in the formation of this society, including the landowners and the residents of the Sierra de los Filabres. Manuel Perez Sola is a Greenpeace member.

Keep in mind that large cracks in the trunk of an oak were discovered in June last year. This prompted a series calls to the competent authorities to take the necessary actions to stop the tree's deterioration and to establish an urgent plan to stabilize his health.

The national and international media echoed the concerns expressed by renowned environmental experts and groups about La Peana. They even reached out to the Andalusian Ombudsman.

The crowdfunding campaign, for its part, aims to encourage economic participation of friends, neighbors, and supporters through GoFundMe.

The financial entity Cajamar, Provincial Council of Almeria, and the Cosentino Group have already received the initiative.

"Citizen participation in conserving the oak of La Peana is vital to preserve it and to leave a legacy for many generations to come," said Bernabe Moya, the expert in monumental trees, forests and biodiversity.

‹ ›
Keywords:
AndresGarciaIbanezRetrataEncinaSeronAyudarCampanaCrowfounding
Your comment has been forwarded to the administrator for approval.×
Warning! Will constitute a criminal offense, illegal, threatening, offensive, insulting and swearing, derogatory, defamatory, vulgar, pornographic, indecent, personality rights, damaging or similar nature in the nature of all kinds of financial content, legal, criminal and administrative responsibility for the content of the sender member / members are belong.
Related News