An art forger by the grace of God

Robert Pfeifer is sitting in his office across from the church, rocking back and forth in his chair. 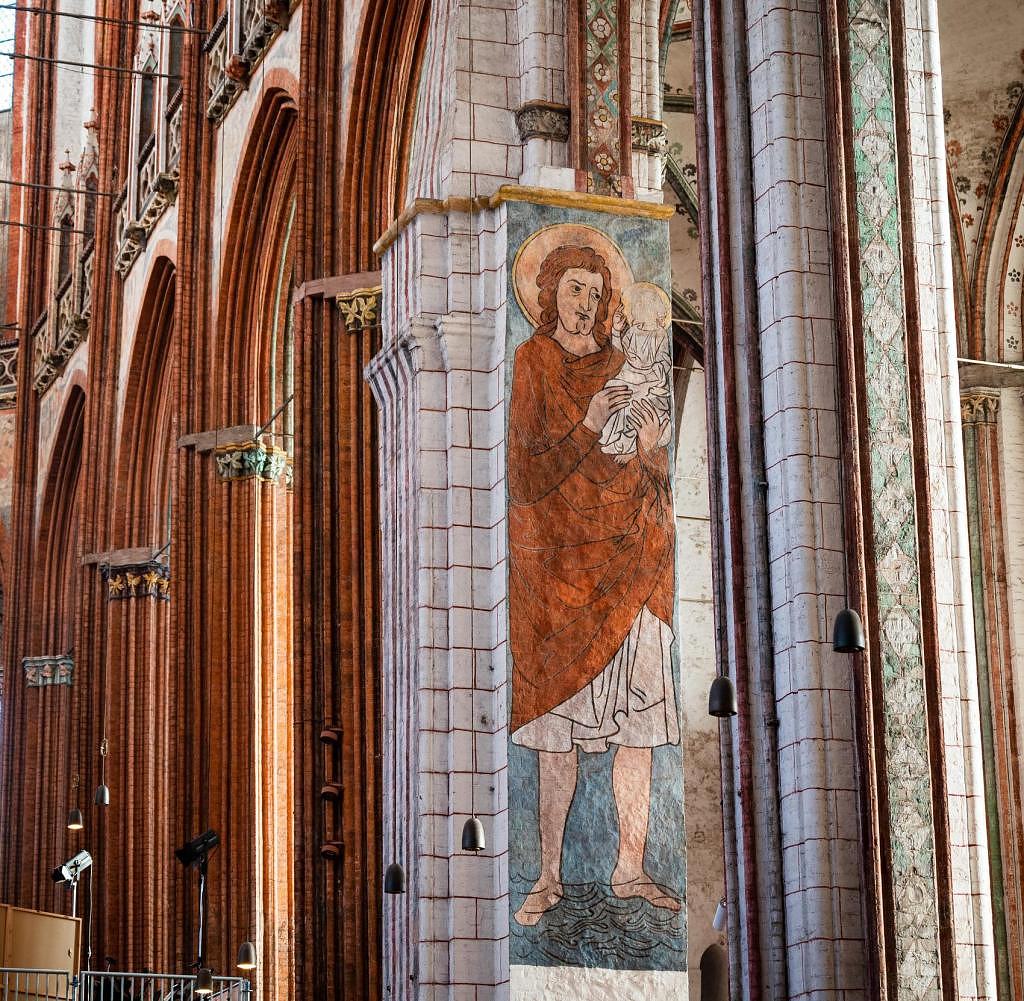 Robert Pfeifer is sitting in his office across from the church, rocking back and forth in his chair. In the warm light of his floor lamp, he talks about his church and its history, which also includes a very special chapter. Pfeifer has been working here in Lübeck's city center since 2011. Its cathedral is considered the "mother church of brick Gothic" and is a UNESCO World Heritage Site. It has been being restored since 2020 - and with it the legacies of the art forger Lothar Malskat.

Malskat became known in the 1950s as the "master forger of Lübeck". He forged numerous Gothic motifs on the walls, pillars and vaults. St. Marien became the scene of one of the biggest art forgery scandals in post-war history. The court case in 1954 and 1955 caused a nationwide sensation. With the ongoing renovation work, the "Malskat story" that was believed to have been forgotten now once again calls for the debate about truth and forgery as well as guilt and atonement - and is thus becoming a piece of coming to terms with the past for St. Marien.

The interior renovation is expected to cost around 28 million euros. "We are currently working on securing the financing," says Pfeifer. One of the plans by 2030 is to remove and rework all glass windows. In addition, a new heating system, a room and acoustic concept as well as the organ landscape are to be evaluated and designed. A huge scaffolding was erected in September 2021 to record the damage to the paintings. Where one had stood decades ago.

The story of Lothar Malskat begins in July 1948. At that time, he climbed every day onto scaffolding in the vaults of St. Marien, where he was supposed to work up the remains of the old paintings, first in the nave and from 1950 on in the choir. Overall, however, the church needed more than just a little paint, because after the bombardment on the night of Palm Sunday, when British destroyers flew the first air raid on Lübeck at the end of March 1942, the church burned down almost completely. Emergency roofs were quickly erected and the masonry supported. The Lübeck company Fey took over the restorations.

Businessman Dietrich Fey hired Lothar Malskat, an East Prussian journeyman painter, born in 1913 in Königsberg. The heat of the fire caused the lime paint to flake off, revealing old Gothic wall paintings from the 13th and 14th centuries, when the church was built. However, the originals were sometimes only recognizable in indistinct traces.

In the courtroom, Malskat will later say that Fey told him to simply paint everything nicely. This is how 21 figures of saints are created in the choir, all of them fantasy creations of their creator Malskat. It's dim inside the church, the windows are boarded up, and where God can't look, maybe there's no sin.

Some of the motifs that can still be seen today even have runnants, i.e. paint that simply dripped down the walls, Pastor Pfeifer explains today. "But Malskat didn't care because he knew you couldn't see it from below anyway."

Local celebrities gathered in late summer 1951, just in time for the 700th anniversary of the laying of the foundation stone for St. Marien. Federal Chancellor Konrad Adenauer also travels and turns the frescoes in the church into an event of national importance. Malskat, however, is not mentioned at all - and henceforth plots revenge.

What nobody knew: he snapped countless Leica films to document the bare plaster on the walls. He was later able to prove that he was the author of the 21 "hypocrites" and in September 1952 he first filed a criminal complaint against Fey and shortly afterwards against himself. An article in the Lübeck publication "Der Wagen" later reported on an expert opinion from 1952 that concluded that the figures in the chorus represented a serious case of art forgery.

In November 1953, the Lübeck public prosecutor filed charges. Pastor Pfeifer says today: “There were enough people who knew all this and supported it. Malskat is certainly not the only one who worked in an ambiguous manner.” In the end, the forger was sentenced to one year and six months and Fey to one year and eight months in prison.

After his release, Malskat lived in Wulfsdorf near Lübeck in the 1970s and 1980s. He regularly visited the Kunsthaus of Frank-Thomas Gaulin and Klaus Oestmann, which both have been running in the Hanseatic city since 1976. Gaulin has worked as a sworn art appraiser for more than 20 years. "It was delicious," he recalls when asked by WELT AM SONNTAG. “Malskat always came to us with a packet of coffee. Then he sat down on the stairs in the hall and chattered away.”

Malskat, it is said, had something strange and mysterious about it. After his time in prison, he was able to gain a foothold as a serious artist, but after his death in 1988 his work sank into insignificance. Today some of his paintings went for a ridiculous amount of money, according to Gaulin. "As good as he could fake, his own work was mediocre."

In any case, the church is still in the condition in which Malskat left it. Its relics - plants, small birds, dragon creatures - are visible everywhere. “We clean the paintings with laser technology. But the preservation of monuments is already saying that they should be preserved as the 'Malskat layer' and a piece of contemporary history," says Pfeifer.

The pastor seems mild when he says Malskat might have been the right man at the right time. He was permanently undervalued and needed "a monument in Lübeck". So Malskat was an artist and not a scammer? “Yes, he is wrongly pilloried as a forger. He gave the church an incredible amount,” Pfeifer is convinced.

And even if the "Malskat story" has everything it needs for a veritable scandal, if it's about right and wrong in the world and guilt and atonement in the church, Pfeifer doesn't see the morality peeling off the church walls: "I say, one should exercise great restraint before berating someone,” says Pastor Pfeifer. It's always easy to point fingers at others.

In any case, Malskat's work should in future be honored on church tours. After all, St. Marien is a tourist magnet and attracts 500,000 visitors every year. There can hardly be enough good stories here.

‹ ›
Keywords:
KrimiGeschichteLübeckMarienkircheKircheLotharSankt MarienKirchenbautenKunstfälschungenMalskatKunstskandaleLothar MalskatRobert PfeiferKunstfälscher
Your comment has been forwarded to the administrator for approval.×
Warning! Will constitute a criminal offense, illegal, threatening, offensive, insulting and swearing, derogatory, defamatory, vulgar, pornographic, indecent, personality rights, damaging or similar nature in the nature of all kinds of financial content, legal, criminal and administrative responsibility for the content of the sender member / members are belong.
Related News