Among the inhabitants of the Ukrainian Donbass, a pro-Russian background noise

The Bakhmout market, 70,000 inhabitants before the war, is used to buy or barter some fresh provisions or warm clothes for the winter. 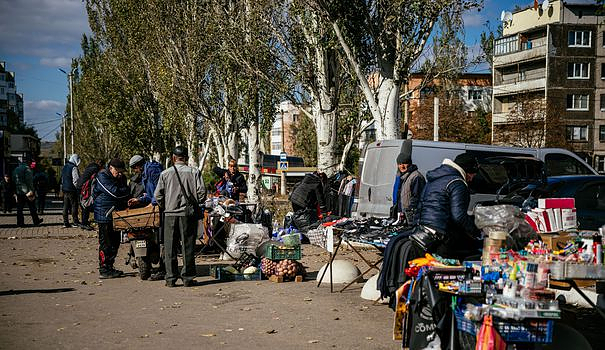 The Bakhmout market, 70,000 inhabitants before the war, is used to buy or barter some fresh provisions or warm clothes for the winter. But is also, in this politically divided city, a place where we look at each other sideways.

Yulia leaves the place like everyone else when the bombardments approach. This 46-year-old woman, who did not want to give her surname for fear of reprisals for the opinions she expresses, accuses the Ukrainian army of these shootings.

"I don't understand why Ukraine is destroying its cities. I hear that Ukraine is doing this to itself, to make sure that Russia doesn't get anything back," she says.

While acknowledging that "the aggression is completely on the Russian side", Yulia believes that it is up to Ukraine to agree to lay down its arms.

This resident of Bakhmout takes up a conspiracy theory relayed on dozens of local Telegram channels, claiming, among other things, that Ukraine voluntarily destroys its cities before losing them.

For these groups, some closed, some not, the narrative is not actively pro-Russian, but openly anti-Ukrainian.

The line not to be crossed in order not to risk trouble in a country which does not punish the offense of opinion, but has a law concerning disinformation and the media on the web, remains very fine.

In the main Telegram group of inhabitants of the capital of the region, "I love Kramatorsk" (40,000 subscribers), in the midst of publications on gas cuts or on the collection of leaves, we celebrate in half words the strikes in the morning over kyiv. Under this publication, hundreds of "likes", but also a few dozen indignant comments.

The cohabitation here between those supporting Ukraine and those favorable to Russia has been a reality for years, despite the most dramatic state of war since the start of the conflict in 2014.

Lessia, a 46-year-old trader living in Bakhmout who did not wish to give her last name, sells biscuits on a wooden board. While she ran a thriving upholstery textile business with 16 employees until February, some of whom, she says, are "separatists".

"Some of them fled to Russia, thinking of coming back here later" if the city fell, she says.

"I am a normal Ukrainian, with a son in the Ukrainian army", tries to synthesize the forties, who does not pass judgment on her employees and considers that they are "intoxicated" by the propaganda of the Russian government.

"But, for them, I am a Banderivka," she laughs, a follower of Stepan Bandera (1909-1959), an emblematic figure of Ukrainian nationalists and the anti-Soviet struggle but whose many supporters collaborated with the Nazis.

To put an end to the war as quickly as possible and out of a sense of belonging to the concept of the "Russian world" hammered home by Vladimir Putin or because of family ties on the other side of the border, a fringe of the inhabitants of this region of Ukraine accepts or supports the idea of ​​coming under Moscow's control.

In the devastated part of Bakhmout, where the gutted buildings follow one another, in the store of Oksana and Oleksandre, neighbors who know each other and "think the same" can come three hours a day to charge their laptops on a generator.

The two Ukrainians are from Donetsk, the "capital" of a self-proclaimed pro-Russian republic located 100 km away recognized by the Kremlin at the start of the war and inaccessible from Ukraine.

"For me, the question is not whether I'm on the wrong side of the border or not," says Oksana.

"It's the Ukrainian army which is on the wrong side of the border, we didn't ask them anything, especially not to come and defend us," she concludes.