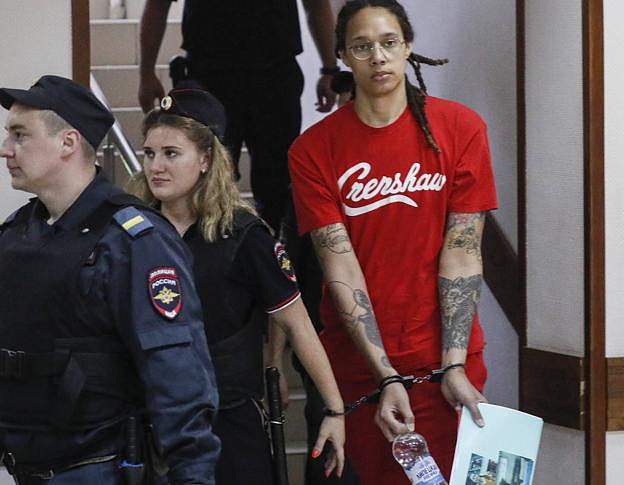 Brittney Griner, an American basketball player, continues to face nightmares. Brittney Griner, the WNBA's champion and two-time Olympic gold medalist, pleaded guilty to a drug offense in Moscow. She could be sentenced to up to ten year imprisonment.

Griner, 31 years old, was arrested in February at Moscow’s Sheremetyevo Airport after two cannabis oil-containing cartridges were found in her bag. Alexander Boykov, Griner's lawyer, stated that Griner recognized the cartridges as hers but that she had brought them to Russia unintentionally.

Maria Blagovolina (his other lawyer) indicated that she and Griner trust the court's leniency. The sentence of the two-time Gold Medalist will be read next Thursday. Griner, who is a player for a Russian basketball league during the WNBA offseason has not made a statement.

The White House describes Griner's detention as "unjust" and has received more requests from civil, religious, and political society..

The Kremlin has criticized the US media noise in this case on Thursday and warned that it hinders the discussions that the two countries have been having for some time to exchange prisoners.

The White House has not yet officially discussed the possibility of any exchange in this case. However, Russian media speculate on the possibility Griner could be used as a bargaining chip. Viktor Bout, a Russian arms dealer.

‹ ›
Keywords:
JugadoraBaloncestoEstadounidenseDetenidaRusiaPosesionDrogasDeclaraCulpable
Your comment has been forwarded to the administrator for approval.×
Warning! Will constitute a criminal offense, illegal, threatening, offensive, insulting and swearing, derogatory, defamatory, vulgar, pornographic, indecent, personality rights, damaging or similar nature in the nature of all kinds of financial content, legal, criminal and administrative responsibility for the content of the sender member / members are belong.
Related News