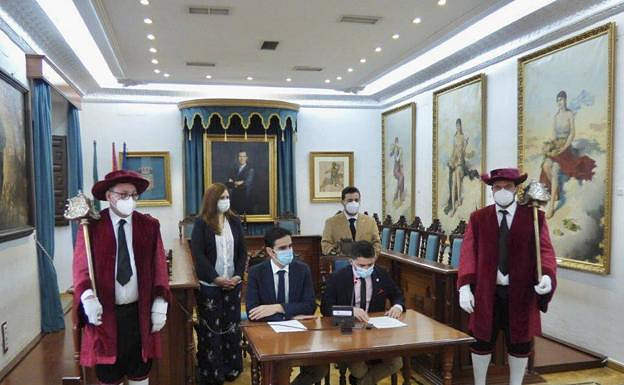 Yesterday, Alcala la Real City Council revealed the names of five Hercules award winners. This was in keeping with tradition. These awards were established in 2003 and are presented every two years to individuals, groups, companies, or institutions whose contributions have been outstanding in their respective fields.

Marino Aguilera, the mayor, stated that they were seeking to recover December 20, 2012, to complete the communication of winners. This was "as reflected by the regulation of honors, distinctions, and awards of the City Council in article 39." He said that the figure of the board, which consisted of three spokespersons and the mayor, has been also recovered.

After a "healthy, collaborative" debate, the following awards were unanimously granted. Aguilera stated that all of the awards were based on a career or vocation. She wished for them to be extended and made available to all groups represented by the winners.

Angel Montoro (deputy mayor and spokesperson for the municipal government) announced the winners. Solidarity, Coexistence and Equality: For the Holy Family Religious Community of Bordeaux. "For the work of this congregation at Alcala la Real and in the villages over 48 years through numerous and varied pastoral and social activities." Diego Rey Hidalgo is the Youth and Sports Award nominee. He is a young Alcala man who graduated from Club Baruca Academy and has won in Madrid in musicals and participated in short films. He is currently a student at the Victor Ullate Dance Conservatory, Madrid. He will soon perform a new musical.

Montoro stated that Casa Montanes was the best proposal in Economy and Tourism because it is the oldest food enterprise in the area and celebrated its 100th birthday in 2018. The recently opened Boutique Hotel Palacete de la Veracruz is owned by Francisco Jose Moyano Lopez and Eva Maria Perez Anguita. The spokesperson for the municipal government said that the successful rehabilitation of a historic building, the old corral des comedias, was to place it at the service local heritage, economic growth, and the tourism sector. Jose Sanchez Jimenez is a graduate of Fine Arts and a teacher and painter from Alcala. His extensive legacy can be found in San Juan and Las Angustias churches, as well in SAFA and in the town hall.

These names will be re-ratified in February at the municipal plenary session. Usually, the act of delivery coincides with the Day of Andalusia festivity. However, this can vary depending on how the pandemic evolves and the regulations in place at the time.

‹ ›
Keywords:
GalardonadosPremiosHercules2020Conocen
Your comment has been forwarded to the administrator for approval.×
Warning! Will constitute a criminal offense, illegal, threatening, offensive, insulting and swearing, derogatory, defamatory, vulgar, pornographic, indecent, personality rights, damaging or similar nature in the nature of all kinds of financial content, legal, criminal and administrative responsibility for the content of the sender member / members are belong.
Related News