Two people were arrested by the Civil Guard of Almeria for the theft of 22 beehives. 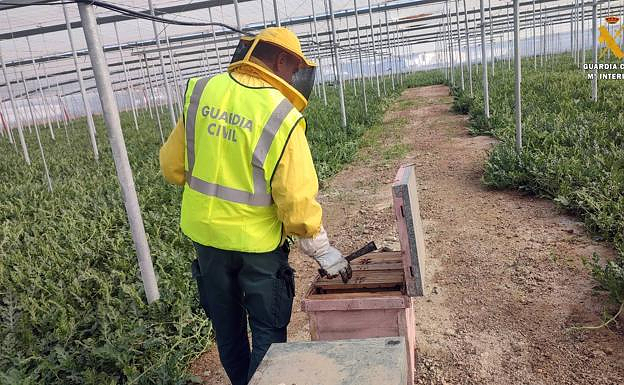 Two people were arrested by the Civil Guard of Almeria for the theft of 22 beehives. They were fully recovered through a coordinated operation between the "ROCA" teams, and the Seprona of Almeria command.

This action was taken within the context of an investigation by the Civil Guard into crimes in the Plan against Robbery in Agricultural and Livestock Facilities in Almeria.

The victim filed a complaint at the Nijar Civil Guard barracks, which led to the Civil Guard being made aware that a large number had been stolen. For the prevention of such crimes, the Civil Guard recommended that the beekeeper adopt the appropriate preventive measures. These recommendations were made during the regular meetings of the "ROCA" teams in Almeria, which include professionals from the livestock and agricultural sectors.

The agents can now reconstruct the events exactly. Despite the fact that the hives had been moved multiple times by the thieves, they were temporarily moved to different towns in the province (Sorbas Mojacar, Nijar), and then a follow up was done until all the hives were recovered in a Nijar wintering farm.

After the hives have been located, agents will conduct the final phase of investigation to identify the thieves and locate them. The estimated value of the stolen beehives is 2700 euros. The Dean of the Courts of Almeria has access to the proceedings ordered by the Civil Guard as well as the detainees.

‹ ›
Keywords:
DetenidosAlmeriaSustraccionColmenasNijar
Your comment has been forwarded to the administrator for approval.×
Warning! Will constitute a criminal offense, illegal, threatening, offensive, insulting and swearing, derogatory, defamatory, vulgar, pornographic, indecent, personality rights, damaging or similar nature in the nature of all kinds of financial content, legal, criminal and administrative responsibility for the content of the sender member / members are belong.
Related News