Almeria is interested in more bone marrow donors, and they will accept the call when they are available

Nerea GuerreroCobo's family was in desperate need of a bone marrow donor for their daughter. 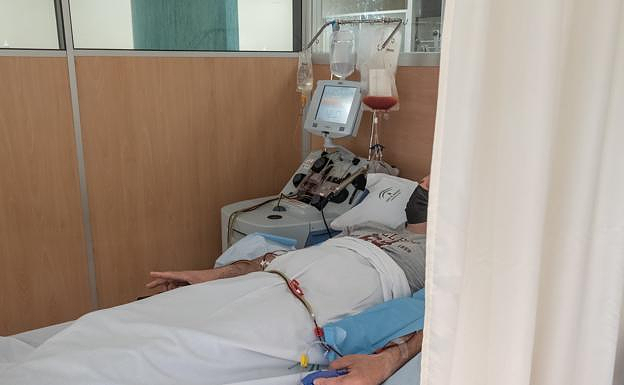 Nerea GuerreroCobo's family was in desperate need of a bone marrow donor for their daughter. They decided to launch an outreach campaign. They set up a Facebook page that had 10,000 fans and attended numerous blood and plasma collection to report on the topic. It worked and attracted half of Andalusia. Because they were compatible with patients coming from other parts the world, two family friends were called. Nerea received her donor in America a few months later. She is still healthy to this day. This media campaign has caused the registry to see a surge in new donors. In 2019, 1,280 people joined the registry. This number was 70% lower in 2021 when it fell to 376, which happened two years later. Despite this sharp decline, the Blood Transfusion Center as well as the Sectorial Tissue Bank of Almeria/Granada assure that the numbers are consistent with the plans.

After the previous plan was successful in reaching enough donors, efforts were made to increase the effectiveness of donations with "more quality over quantity." Jesus Garcia, the head of the Blood Components Distribution Area, at the center, explained it this way. He stressed that they are seeking "younger, more informed, and more motivated donors who have been immunologically typed using more precise and modern techniques." They don't back down when it comes time to call someone because they are compatible. He explains that the goal is to have a zero rejection rate.

Media cases like that of Pablo Raez, Malaga's Pablo Raez, are important for dissemination. However, the ideal is informed donation. This includes those who visit the Transfusion Center to donate plasma or blood and who are interested in this topic. They can be compatible with any person who requires it by simply submitting a blood sample. The registry currently includes people between the ages 18 and 40. There are over 30 million bone-marrow donors worldwide. Patients have a better chance of finding the right donor if there is more.

Jesus Garcia claims that 99% of people who need a transplant of this kind have hematological cancers. This means they have leukemias and lymphomas as well as other diseases where the marrow is "irreversibly diseased". No pharmacological treatment is possible. . The closest environment is preferred, but only 25-30% have a sibling who is compatible. He adds that haploidentical transplantation of father to son is becoming more common. However, there are often beneficial effects.

Most often, allogeneic transplants using unrelated donors are used. "We used the marrow of someone else to do a type of cell therapy. The recipient's sick cells are still being treated by it. A donor can treat cancer in a stranger even if the prognosis is not good.

All this is why the Transfusion Center, Tissues and Cells encourages the public to join this registry. This registry can provide a tremendous benefit with minimal effort. It saves lives and shows solidarity. Jesus Garcia concludes that we all may need it at any given moment. The more, the better."

Angel lies on a stretcher in the Center for Transfusion, Tissues and Cells. He is watching TV and looking at his phone while he gives away his life. He received a call one month after he entered the Bone Marrow Donor Registry. He was a match for the patient who needed a transplant. He didn't hesitate to go ahead and complete the procedure. He admits that he felt emotional when they told him.

Angel was already going regularly to the Transfusion Center to give blood. One time, the protocol for bone-marrow donation was reported to the registry. He was shocked that they called him so quickly. This is not normal. Only one in 2,500 to 3,000 donors has the chance of finding a compatible patient. Angel was one of those donors.

Connect to the machine and wait. She jokes that she is resting all the time because her son won't let me sleep at nights. The recipient's disease may dictate how much of the donations go to the operating room. Only 1% of all donations are made there. Both modalities allow for quick and complete recovery.

‹ ›
Keywords:
AlmeriaPersigueDonantesMedulaAceptenRecibanLlamada
Your comment has been forwarded to the administrator for approval.×
Warning! Will constitute a criminal offense, illegal, threatening, offensive, insulting and swearing, derogatory, defamatory, vulgar, pornographic, indecent, personality rights, damaging or similar nature in the nature of all kinds of financial content, legal, criminal and administrative responsibility for the content of the sender member / members are belong.
Related News