Yesterday, Almeria returned to the capital to defend their rights to social justice. 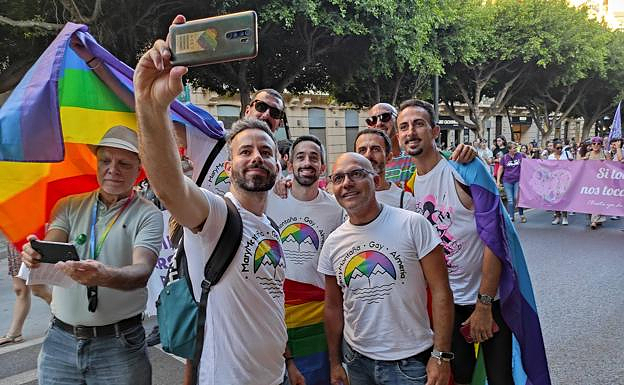 Yesterday, Almeria returned to the capital to defend their rights to social justice. Pride Day shined proudly, pardon the redundancy to highlight the daily struggles of LGTBIQ people.

Unfortunately, a march is still necessary due to the continued attacks in all territories just for having a different orientation to the one already in place.

The gathering took place in the Plaza de las Velas at 8:00 pm. This is a common point in recent years and was attended by many associations supported by Almeria con Orgullo.

This one was full of flags to defend gays, lesbians transsexuals, bisexuals, and 'queers'. There were also vindictive posters to defend rights that may seem simple from a normative perspective, but which are a real odyssey for the members of the group every day.

After the majority of the group was assembled, they headed towards the center of the city, until they reached Puerta Purchena at the end, where they were given a manifesto by representatives from the associations.

‹ ›
Keywords:
AlmeriaOrgulloPresumeReivindicativo
Your comment has been forwarded to the administrator for approval.×
Warning! Will constitute a criminal offense, illegal, threatening, offensive, insulting and swearing, derogatory, defamatory, vulgar, pornographic, indecent, personality rights, damaging or similar nature in the nature of all kinds of financial content, legal, criminal and administrative responsibility for the content of the sender member / members are belong.
Related News