Almanzora Valley is a tourist destination 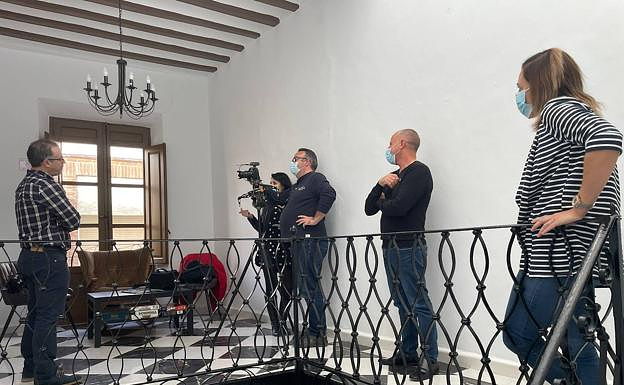 The Almanzora Tourism Project continues to grow and bear fruit. A new program was just recorded in the Almanzora Valley by DESTINO ANDALUCIA for Canal Sur Television.

The fifth recorded program, which was recorded in Cantoria and Albox, focused on railways and the history and heritage of the 19th-century in these areas. It was recorded with the cooperation of the Valle del Almanzora Association of Tourism Entrepreneurs, and local councils. The church in Cantoria was recorded from the outside as well as the inside, including the bell tower. In a guided tour led by Andres Carrillo on Alamo street, prominent 19th-century figures have been recorded. A bike route was also recorded from Cantoria station up to Almanzora station. At the Almanzora Station bar, you can enjoy a coffee and sweets from this area, and the Almanzora Palace. Albox is the former convent that is home to the town hall. The surroundings of the main square, church, and surrounding streets were recorded. Some dishes have also been demonstrated in Restaurante La Parrilla, which has a forjaman workshop where they are engraved. The surroundings of Zurgena were recorded. Isabel Alone, president of the Friends of Zurgena Railway Association, spoke. Isabel Alone, local guide, visited the church and climbed the clock tower to take in the view. It was also recorded in the "houseof dreams", a 19th-century house that has been converted into tourist accommodation.

Twelve municipalities have been featured on the Canal Sur program so far: Oria. Chercos. Lucar. Somontin. Lijar. Laroya. Seron. Bacares. Macael. Arboleas. Tijola. We will also see the three new towns in the next few weeks. This makes it a total of fifteen.

Promotion of local municipalities, especially smaller ones, is crucial for spreading the wealth of resources, history, and heritage of the region. Destino Andalucia has an average audience greater than 250,000 people. This will allow the Almanzora Valley to be known.

Turismo Almanzora, in addition to being part of this tourist promotion program, is also involved in disseminating gastronomic product from the region through programs like Cometelo>>> on Canal Sur or Aqui la Tierra>> TVE. With the participation of Turismo Almanzora so far, 12 Cometelo programs have been recorded and 8 reports from Aqui La Tierra. This has made it four programs.

It is essential that twenty municipalities participate in Turismo Almanzora to ensure the project's continued progress and to achieve such great results, which was unimaginable three years ago. It's proving that both businessmen and local councils can work together to promote the region, its products, and attract tourists.

‹ ›
Keywords:
ValleAlmanzoraDestinoTuristico
Your comment has been forwarded to the administrator for approval.×
Warning! Will constitute a criminal offense, illegal, threatening, offensive, insulting and swearing, derogatory, defamatory, vulgar, pornographic, indecent, personality rights, damaging or similar nature in the nature of all kinds of financial content, legal, criminal and administrative responsibility for the content of the sender member / members are belong.
Related News