Algeria: most fires under control, surge of solidarity 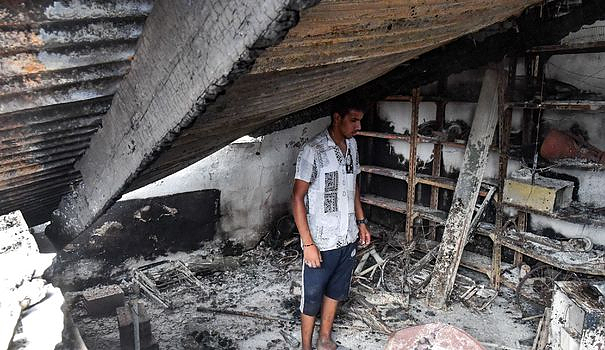 "Seven fires were in progress at 1:00 p.m. (12:00 GMT) in two wilayas (departments): four in El Tarf and three in Skikda" (east), Civil Protection announced in a tweet.

Previously, one of its officials had announced the extinction of “all” of the fires which ravaged the north-east of the country for two days, also causing around 200 injuries, including severe burns.

The official death toll remains at 37, including 30 in the El Tarf area, including 11 children and six women.

Five other deaths were recorded in Souk Ahras (east) and two in Sétif (east). And the media report a 38th victim, a 72-year-old man who died in Guelma (east).

Every summer, northern Algeria is affected by forest fires but this phenomenon is accentuated from year to year under the effect of climate change which results in droughts and heat waves.

Experts have also pointed to shortcomings in the fire-fighting system: a lack of water bomber planes and poorly maintained forests.

More than 1,700 firefighters had to be mobilized to overcome more than 70 homes.

Several media speak of missing, without official confirmation for the moment. DNA tests are to be performed on some unidentified bodies.

Friday prayers in mosques were devoted to fires, with a call "for the preservation of life".

Entire families perished, in particular a dozen people trapped in a "tornado of fire" in a bus in front of the El Kala animal park, near El Tarf.

An AFP team saw the charred carcass of the bus and met peasants who had lost everything, like Hamdi Gemidi, 40, still in shock at seeing his livestock burned alive.

"It's our livelihood, we are farmers, we raise livestock like sheep, cows, chickens and cattle. We have nowhere to go and nothing to earn a living," he said. he told AFP.

Ghazala, an 81-year-old farmer, saw her house, dog and cat engulfed in fire.

"People came to tell me to evacuate the house because I was in danger of burning, but I didn't care because of my grief. I had accepted my fate, but the rescuers took me out with a few animals who been spared. I don't know where to go now, should I stay in the fields, the forests or the mountains?"

The Ministry of National Solidarity announced "psychological and social care" for the victims.

Collections of clothes, medicines and food have started.

Individuals in Algeria or abroad relayed calls on social networks and directed them to sites where to deposit these donations.

Thursday, dozens of trucks loaded with several tons of humanitarian aid arrived in El Tarf, according to a press release from this prefecture.

Also out of solidarity, all artistic activities in the country have been postponed.

The Ministry of Justice has opened an investigation into the origin of the fires suspecting criminal causes.

Four arrests were announced: "an arsonist" in Souk Ahras where more than 350 families fled their homes and a hospital was evacuated, and three other men in El Tarf, 200 km away. They are accused of having set fire to the crops of a neighbour, without any link established for the moment with the fires in the area.

According to the Algerian penal code, an arsonist risks between 10 years in prison and life imprisonment.

Since early August, more than 200 fires have destroyed hundreds of hectares of forests and copses, according to an AFP compilation.

So far, the summer of 2021 has been the deadliest in decades: more than 90 people died in forest fires that devastated the north, in particular Kabylia.