Alexis Kohler suspected of having "participated" in decisions on the MSC shipowner, linked to his family

Mediapart revealed this possible conflict of interest in May 2018. 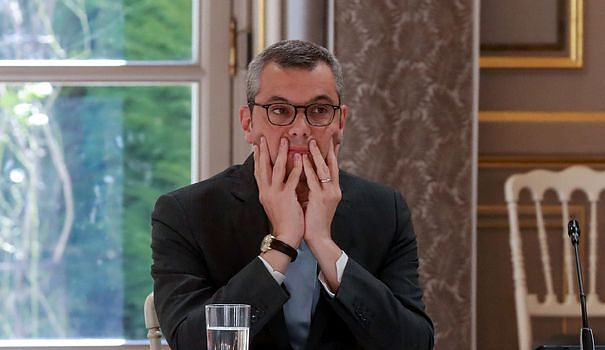 Mediapart revealed this possible conflict of interest in May 2018.

After a year of investigation at the PNF closed without follow-up, the Anticor association obtained in June 2020 the appointment of investigating judges.

In this rich investigation of more than fifty hearings and ten searches, Mr. Kohler was questioned on September 22 and 23, according to elements of his interrogation of which AFP became aware on Tuesday.

Judges Virginie Tilmont and Nicolas Aubertin accuse him of having "participated" from 2009 to 2012, as an administrator, in five deliberations of the authorities of STX France (today Chantiers de l'Atlantique) and three of the Grand Port Maritime du Havre ( GPMH), linked to MSC.

Then between 2012 and 2016 in Bercy, under Pierre Moscovici then Emmanuel Macron, to have in particular "persisted (...) to issue opinions or give strategic orientations relating" to files involving MSC.

A potential offense, because the mother of Alexis Kohler is a cousin of Rafaëla Aponte, wife of the founder Gianluigi Aponte. A "simple" but "5th degree", "distant" family link, for the person concerned.

Mr. Kohler also recognizes a "sincere friendship" between his wife and Rafaela Aponte, with annual stays by Sylvie Kohler or their children from 2009 to 2013 but also in 2019, on MSC yachts, often with members of the Aponte clan.

For the judges, this "moral interest" can "compromise the impartiality, independence or objectivity" of Alexis Kohler.

In front of the magistrates, the secretary general of the Elysée indicates from the outset that he "never considered to be in a situation of conflict of interest".

But paradoxically, he hammers having done everything, "from November 2008", to find himself far from the MSC file.

He explains that he did not participate in any decision concerning this flagship client of STX; having warned of his family ties and asked to leave his mandate as administrator of STX, which his hierarchy would have refused; having expressed the position of the State rather than his own in the board of directors.

Opposite, the magistrates remind him of the "constant case law" and "very broad" concerning the illegal taking of interests. "It goes very, very far", recently explained a financial magistrate to AFP.

“The participation, would it be exclusive of any vote, in a deliberation on a case in which one has an interest” can be enough, note the judges.

"In retrospect, it is true that it would have been easier if I had not been appointed administrator to avoid any risk", concedes Alexis Kohler.

The magistrates then question the "informal" deportation of the MSC file touted by Alexis Kohler for his period in the cabinet of Pierre Moscovici (2012-2014) then via "a letter" with Emmanuel Macron (2014-2016).

No "writing or note from the State Participation Agency, the Treasury or the ministry mentioning the family link with the Aponte family" or organizing this exclusion from the MSC file was found. between 2010 and 2016.

"I am not responsible for (their) archives", replies Alexis Kohler twice.

The judges are also surprised by at least 28 emails passing through his box between 2013 and 2016 concerning MSC, but also by the ignorance of three former Treasury officials, attached to Bercy, of these family ties or the deportation.

The secretary general of the Elysée argues a role of "station master" organizing the minister's agenda without "intervention on the merits".

Another disturbing fact, Mr. Kohler became financial director of the cruise branch of MSC between October 2016 and the 2017 presidential election won by Emmanuel Macron.

However "neither the Public Service Ethics Commission in 2016", which will validate this revolving door after a first refusal in 2014, "nor the High Authority for the Transparency of Public Life were aware of the exact nature of its links “with the Aponte family, assert the magistrates.

For Alexis Kohler, it was however known even in the "companies concerned".

After fifteen hours of interrogation, Alexis Kohler concedes a single "debate on the degree of formalism pursued throughout (his) career" to warn of his deportation from the MSC files.

"Shocked and indignant" that his "integrity" is "questioned", he disputes any "advantage drawn" from this situation.

Virginie Tilmont and Nicolas Aubertin are indicting him for "illegal taking of interest", punishable by five years in prison and a fine of 500,000 euros.

If the judges also questioned him about his influence in various cases concerning MSC, Alexis Kohler is an assisted witness for "passive influence peddling".

At this stage, there are no "serious or concordant indications" as to "support" by MSC of "family stays" and the position of financial director against the use by Mr. Kohler of "his influence" in favor of the shipowner.

After the indictment, Me Eric Dezeuze indicated that his client "contested (...) any offense" and intended to "demonstrate his innocence".

Emmanuel Macron judged him "completely legitimate" to keep him at the Elysée.

Asked by AFP, his lawyer did not wish to react and the Elysée affirmed "not being able to comment on an ongoing investigation".

“We can be pleased that justice is moving forward and doing its job, even if it is a pity that it takes so long,” replied Anticor’s counsel, Me Jean-Baptiste Soufron.