“This morning, we discussed with the company with which we travel to find out if we could not travel in a sand yacht”, squealed a hilarious Christophe Galtier on Monday during a press conference, just after a madman. 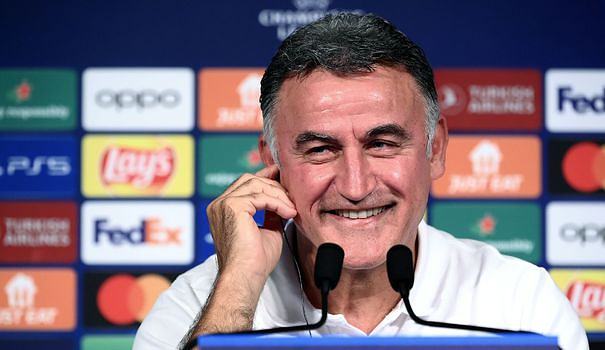 “This morning, we discussed with the company with which we travel to find out if we could not travel in a sand yacht”, squealed a hilarious Christophe Galtier on Monday during a press conference, just after a madman. laughing at Kylian Mbappé, answering a question about the possibility of using the train rather than the plane.

Many political leaders, including Prime Minister Élisabeth Borne, have castigated the casualness of the coach and the star striker of PSG on a subject, climate change, which has become ultra-sensitive after a summer of 2022 marked by three heat waves and fires in repetition.

"I think it is important that they (footballers) realize what world we are in, that they realize that there is a climate crisis which is no longer a hypothesis for tomorrow but which is a reality now. "said Ms. Borne on the sidelines of the inauguration of a police station in Paris.

"I really invite the PSG to take up this subject very seriously, because the French would not understand that some consider themselves above global warming", lashed out the Minister of Energy Transition Agnès Pannier-Runacher.

In the evening, just before the Champions League match won 2-1 against Juventus with a double from Mbappé, Greenpeace deployed a sand yacht and banners near the Parc des Princes to award a "climate red card" at the club.

The boss of the ecological NGO called on Mbappé to put his "aura around the world" at the service of the "fight" against the climate crisis.

At the end of the match, the Paris SG coach told Canal of his regrets, while ensuring that he and his players were not "off the ground".

"Believe me that I am concerned about the problems of climate, of our planet, I know the responsibility that we have. (...) We are not above ground, we are very lucid, it's just a joke which comes at the wrong time, which is in bad taste, and I regret that," he said.

Before his coach's mea culpa, PSG had taken the trouble to indicate that he was studying "all the possibilities of travel to the club's away matches, around 25 per season". Discussions are also taking place with the SNCF.

According to PSG, the priority remains "security, respect for public order, logistical issues and the environment", but the club said it had traveled to Lille by coach and planned to do it again "when is possible", for Troyes, Reims, Auxerre and Lens.

For its trip to Nantes on Friday, the club highlighted the late hour and the impossibility of ensuring the return by train to justify its choice of the plane.

“We are tailor-made,” replied a spokesperson for TGV-Intercités, whose general manager Alain Krakovitch had launched the controversy on Sunday, by offering his services.

With limits: the SNCF recognizes that late returns can be a problem, lines are often closed at night for work.

The SNCF offers the privatization of entire trains - which can do a lot for a single team (500 seats in a TGV) - or of one or two 1st class cars.

A major challenge concerns security: how to manage likely crowds of fans waiting for PSG stars at a Paris train station? The railway company replies that it can ensure security thanks to the Suge (SNCF security), possibly helped by the club's security service.

SNCF already provides transport for several rugby teams – and will be responsible for transporting most of the selections competing during the 2023 World Cup – but their notoriety is not at the level of that of PSG. Women's and men's L1 football teams also use its services, she says, without specifying which ones.

In the main foreign championships, in Italy, Spain and Germany, the use of the train is not uncommon.

In England, with seven clubs in London - more than a third of the championship - trips are shorter and even the clubs of Manchester or Liverpool do not hesitate to charter trains to go to the capital.

In October 2021, Manchester United had however been exhausted for having taken the plane to go to Leicester, 160 km by road, a flight of … ten minutes.