After two years of inactivity, Holy Week in Mojacar shines once again 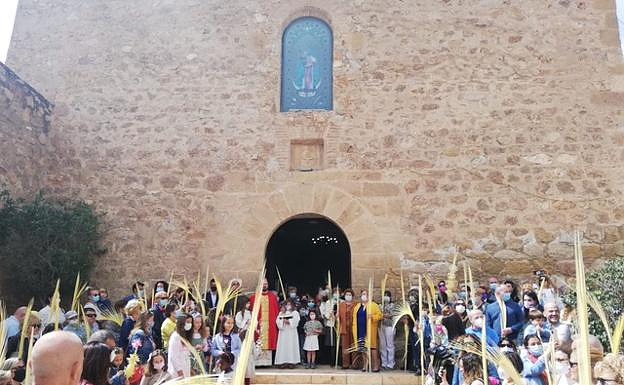 . Holy Week in Mojacar was back last Palm Sunday, with its traditional Borriquilla Procession, in which many neighbors and visitors accompanied a live representation of Jesus' triumphal entry into Nazareth before his passion, death, and resurrection according to the gospels.

He left the Fuente de Mojacar at twelve in the morning to walk up the municipal entrance slope, accompanied with the Municipal Music Band, until he reached Santa Maria, where he was blessed with the palms, olive branches, and celebrated the Mass.

The Mojacar City Council organized events to mark this Holy Week 2022. They also continued the activities on Holy Monday at the Parish Church. Holy Tuesday saw the Via Crucis, which was carried only by bearers and toured the streets in Mojacar.

A concert of sacred music by Municipal Music Band will be held at noon on Holy Thursday in Plaza del Fronton. It is open to all who wish to attend. At seven in the afternoon, Holy Mass In Coena Domini' will be celebrated in Santa Maria. The procession of El Nazareno, and the Virgende los Dolores, will then tour the streets from the Parish Church.

Both passages' thrones had to adapt to local conditions. Its route is particularly impressive because of its narrow streets and winding streets. The costaleros' expertise is required in certain places, which are only a few centimeters away from the houses. Crossing the City Gate, a point of most expectation among the faithful requires that the throne reach the ground. Its porters are able to move almost on their knees.

The Procession of the Holy Encounter will be accompanied by the Municipal Music Band of Mojacar. On Good Friday, the Holy Offices, which celebrate the Passion and Death of our Lord, will take place at The Seven in the Morning.

At half past ten in the evening, the Holy Burial procession will depart from the Parish Santa Maria and travel through the streets of Santa Maria, accompanied by the Municipal Music Band.

Mojacar's Holy Week religious acts will be closed on Sunday at twelve in the morning with the final tour of the town by the procession of Christ the Risen.

‹ ›
Keywords:
SemanaSantaMojacarVuelveBrillarTrasAnosAusencia
Your comment has been forwarded to the administrator for approval.×
Warning! Will constitute a criminal offense, illegal, threatening, offensive, insulting and swearing, derogatory, defamatory, vulgar, pornographic, indecent, personality rights, damaging or similar nature in the nature of all kinds of financial content, legal, criminal and administrative responsibility for the content of the sender member / members are belong.
Related News