After the Russian retreat in Ukraine, victims of torture tell the hell

"Oleksandre" - a 40-year-old man whose identity AFP has agreed to conceal because he has family in the Ukrainian peninsula of Crimea annexed by Russia - said he was arrested on March 22 by gunmen in two SUVs. 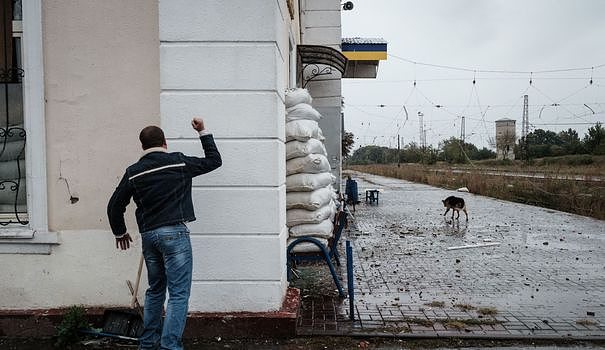 "Oleksandre" - a 40-year-old man whose identity AFP has agreed to conceal because he has family in the Ukrainian peninsula of Crimea annexed by Russia - said he was arrested on March 22 by gunmen in two SUVs.

His captors, he said, turned out to be members of the self-proclaimed Lugansk People's Republic militia in 2014 with Moscow's backing in eastern Ukraine.

A veteran of kyiv's military operation against these pro-Russian separatists in the East, Olexandr says he was a prime target for his men.

His memories are as traumatic as they are painfully confused.

Returning to the scene of his torment in a devastated railway building three short kilometers from the Russian border, he first takes the journalists to a damp cellar.

He looks around, but the place doesn't seem to be the right one. He then led AFP to the customs office, on the first floor of the Kozatcha Lopan station.

Grabbing a rag, he sweeps up the pieces of glass on the floor and then lies down to show how he twitched convulsively when these pro-Russian militia interrogators had attached an electric cable to his penis.

But he still has doubts. It's still not the place he's looking for.

He rummages through exploded cupboards, among Ukrainian signs defaced by the "Z" symbol of Russian troops, then realizes: it was in the next office. It was here that he was repeatedly beaten, kicked and electrocuted.

After a juice shot to his genitals, he jumped so hard that his captors had to protect his head against the ground in order to keep him conscious for questioning, Oleksandre recalled.

"I was standing here like this and they started kicking me everywhere," he told AFP, hands behind his head, before bending down and writhing.

"I told them not to hit me because I have a hernia, but then they pulled my pants down," he continued. "They called it electroshock therapy when they electrocuted me."

"I felt like they were pouring molten metal into my body."

Oleksandre was detained for five days at the train station in the small town of Kozatcha Lopan where he lived all his life, then transferred to a larger prison in Goptivka.

On April 17, his captors suddenly let him go, probably, Oleksandre believes, because they needed space for new Ukrainian prisoners of war.

Returning to Kozatcha Lopan, which was one of the first towns to fall after the start of the Russian invasion in February, he contacted the Ukrainian police in September, after the locality was liberated by the Ukrainian army.

Following the army's advance, police and prosecutors arrived to investigate alleged war crimes. Oleksandr was among those who came to testify.

After the discovery of hundreds of graves in the Kharkiv region, Ukrainian President Volodymyr Zelensky accused Russian forces of being "murderers" and "torturers". Charges rejected by Moscow who spoke of "lies".

Today, the road leading from Kharkiv to Kozatcha Lopan is riddled with huge craters from rockets and shells. Ladas smeared with Russian "Z"s lie destroyed in the ditches and the situation remains tense.

Even as a Ukrainian prosecutor conducts her investigation in Kozatcha Lopan, we hear the sound of outgoing shell fire.

"Measures to bring them to justice will be taken in the coming days. Most of them were locals," said Ms. Shevtsova, surrounded by armed police.

She wants to act quickly, sure she has all the evidence against those who collaborated with the invaders.

“Today we carried out an inspection of the basements, where, as we all know from the evidence, people were tortured,” she explains. "Everything is confirmed".

"Right before that, we inspected the building where the so-called people's police were based. In this building, there is a basement where people were tortured."