After the hurricane comes the fake shark

Scary tales, scary stories and urban myths have always held an unbroken fascination for us humans. 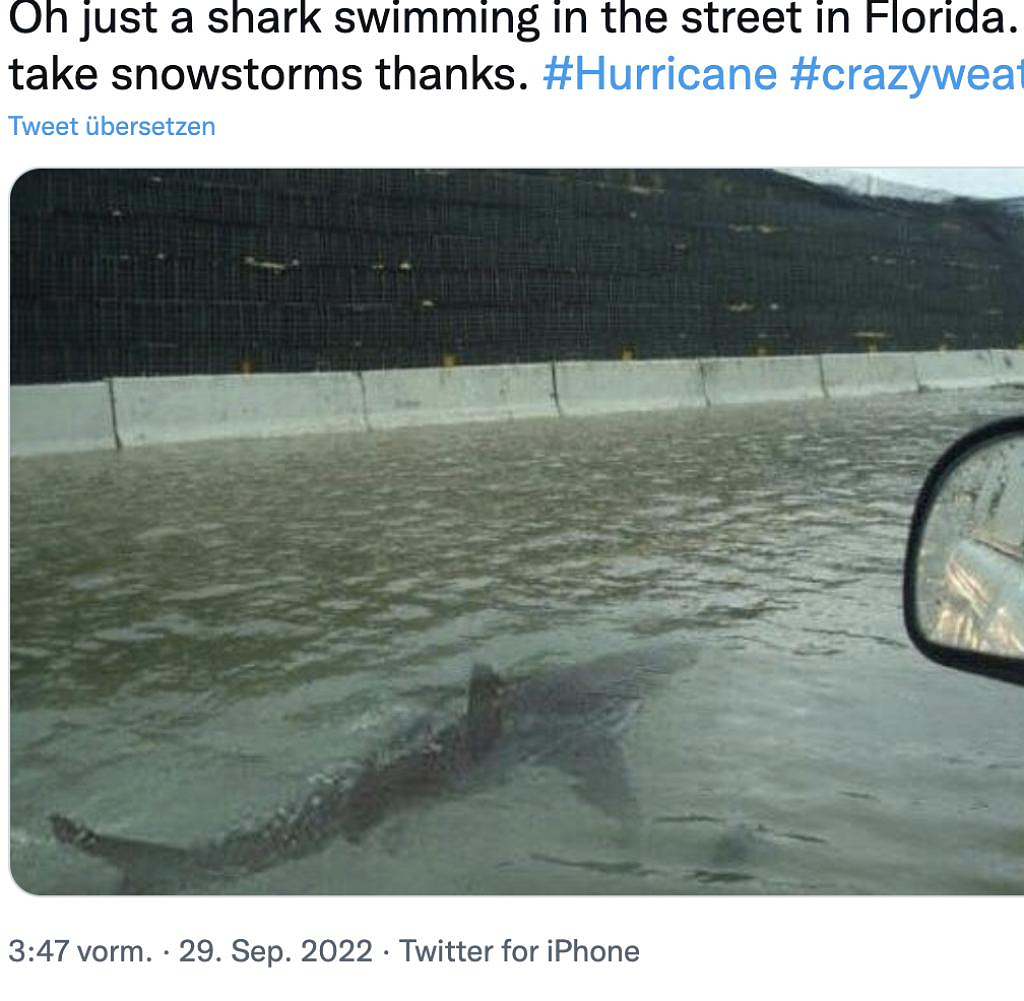 Scary tales, scary stories and urban myths have always held an unbroken fascination for us humans. Most of these fear stories are obviously far-fetched. Nevertheless, eerie mythical creatures like the Loch Ness Monster or the Yeti irritate us. Creatures like the bad wolf, the poisonous spider in our holiday luggage or the great white shark trigger a pleasant shiver in most of us.

Speaking of great white sharks. A particularly persistent, always the same and interchangeable horror message has been haunting the web for years: after hurricane XY, a fairly large shark is said to be swimming through the flooded streets of coastal town XY. Twitter user XY saw him - and the story went viral.

This fake photo of a shark in the water of a flooded highway gained notoriety - somewhere in the world. For more than ten years, the Photoshop beast has been used for hurricane horror stories worldwide. Miraculously, the street shark was sighted again in 2022 during Hurricane Ian. Here is the corresponding tweet:

Strange, but the identical photo from the following disaster areas has already been circulated on Twitter in the past.

When it comes to the theme “Sharks are crossing the streets of our cities after a monster storm”, there seems to be no limit to the imagination. This year, two magnificent specimens are said to have lurked in wait for the residents of the city of Tampa (US state of Florida). In a subway station!

The same photo was apparently used for scaremongering in 2013. At that time there were floods in Toronto, Canada. And even then, the two horror sharks apparently traveled by subway.

But why do these pipe dreams and fake stories fascinate us so much? We asked an expert. Jørn Precht, Professor of Storytelling at the Stuttgart Media University, explains to WELT-kmpkt: “We like to play with our primal fears. Through our play instinct we create situations in which we practice dealing with danger. Bungee jumping or a horror film are not a specific threat, but primal fears are aroused.” And further:

But has a street shark actually been spotted? For those who like the creeps, there may be new shark footage from the coastal city of Fort Myers. A week ago, Twitter user Dominic Cameratta filmed a fairly realistic-looking animal about 1 meter long from his terrace. The fish-like creature cavorted in the waters behind his house. At least a pointed fin seems to be visible on the shaky video for a short time. But see for yourself:

Does the clip, which now has over 13 million views, show a shark or some other big fish? dr Neil Hammerschlag, director of the University of Miami Shark Conservation Program, told the Washington Post: "It's pretty hard to say."

George Burgess, former director of the Florida Museum of Natural History's shark program, said: "It appears to be a juvenile shark. Juvenile bull sharks often inhabit waters with low salinity - rivers, estuaries, subtropical inlets - and often appear in similar videos in waters connected to the sea, such as. B. Coastal canals and ponds”

Marine biologist Yannis Papastamatiou from Florida International University classifies the images as follows: “Most sharks flee hurricanes from shallow bays. They may be alerted to their arrival by a change in air pressure. A shark could have accidentally swum into or been washed into the bay.”

What do you think? Is the animal in the clip a shark? Write us in the comments...

‹ ›
Keywords:
HaieAngstzuständeKmpktTier (kmpkt)HurrikaneFloridaFakesUniversität Von MiamiTwitterHurrikanStuttgarter HochschuleMittelmeerWashington PostReiseFort Myer
Your comment has been forwarded to the administrator for approval.×
Warning! Will constitute a criminal offense, illegal, threatening, offensive, insulting and swearing, derogatory, defamatory, vulgar, pornographic, indecent, personality rights, damaging or similar nature in the nature of all kinds of financial content, legal, criminal and administrative responsibility for the content of the sender member / members are belong.
Related News