After the furious victory, the Selecao greets the seriously ill Pelé

Led by the recovered Neymar, Brazil's ball artists confirmed their dream of a sixth World Cup with a gala performance. 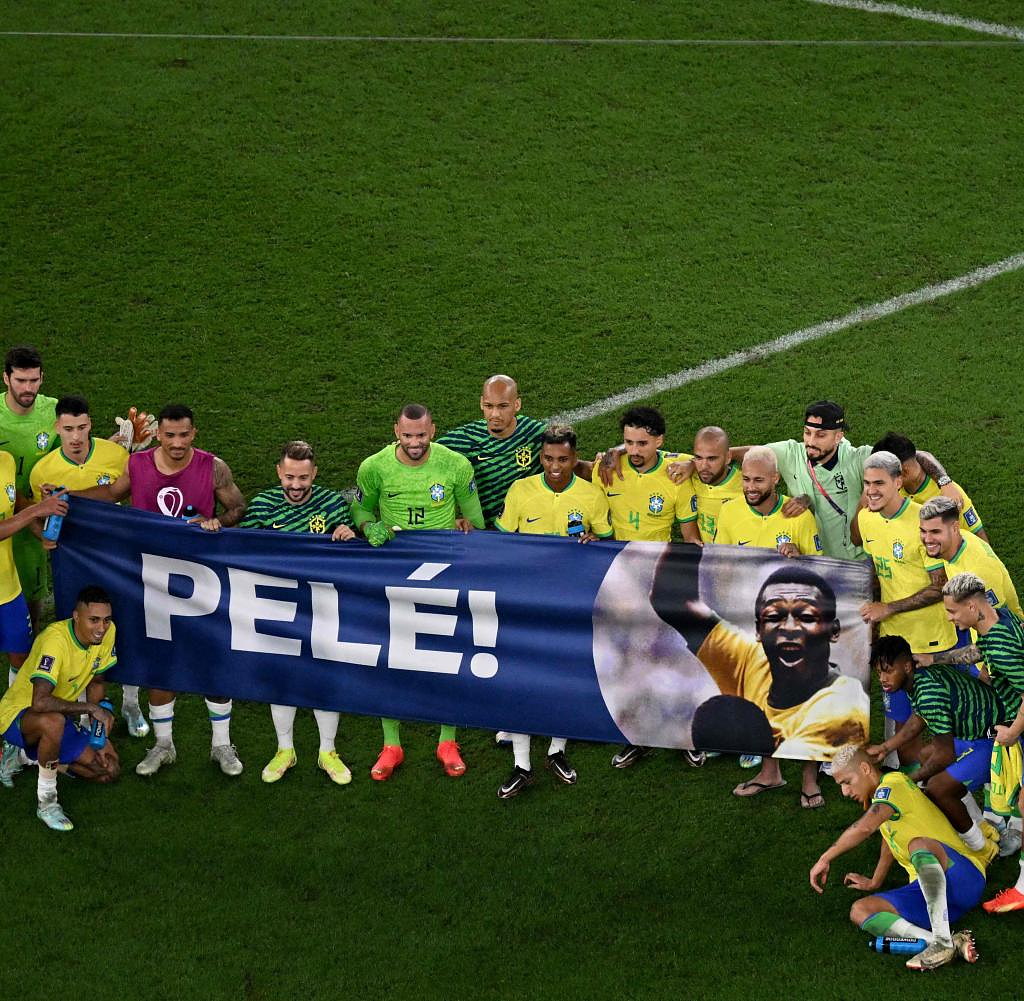 Led by the recovered Neymar, Brazil's ball artists confirmed their dream of a sixth World Cup with a gala performance. The record world champion advanced to the quarterfinals with a 4:1 (4:0) against hopelessly overwhelmed South Koreans. In the first half alone, the Seleção scored four goals through Vinicius Júnior (7th minute), Neymar (13th / penalty kick), Richarlison (29th) and Lucas Paquetá (36th), one of which was more beautiful than the other.

In the second half, the team took it easy and rested for the game against Croatia. It only got emotional again after the final whistle. The Selecao gathered in the connecting circle and held up a banner that read "Pele." They greeted the football legend, who was hospitalized again last Tuesday.

In the past few days, national coach Tite and many Seleção players have been concerned about Pelé's health. The media reported that the chemotherapy was no longer working for him.

Oliver Bierhoff terminates his contract with the DFB after 18 years. The criticism of him was probably just too big after the renewed World Cup preliminary round. Bierhoff looks back on an "intensive, exciting and instructive time". His resignation in the wording.

South Korea's national coach Paulo Bento has resigned after the World Cup defeat by Brazil. "That was my last day as coach of South Korea. I'll take a break and then see what I do then. I said that to the players and the association president. I made this decision back in September, it's set in stone. I thank the association and the players for everything they have done for me," said the Portuguese after the 4-1 draw against Brazil in the round of 16 on Monday evening.

The 53-year-old proudly looked back on his more than four-year tenure. "In Korean football it hasn't been the case for a long time that a coach was there for an entire World Cup cycle. We've always stayed true to our style of play. It makes me proud and happy," Bento said. It was the best team he had ever coached. South Korea has reached the knockout stages for the third time in history. Fourth place at the home World Cup shared with Japan in 2002 remains the greatest success.

In the run-up to the World Cup in Qatar, the ban on beer in the stadiums had been discussed for a long time. In the end, the hosts prevailed - alcohol is forbidden in the arenas. But you can eat, at least if you have an appetite. Canadian commentator AJ Jakubec from "TSN 1200 Ottawa" tweeted a photo of an unsavory hot dog from Doha's Al Thumana Stadium.

The treat consists of a sort of broken, dark bratwurst in what appears to be a very dry bun. “Eating in the World Cup stadium. Not the best,” the journalist comments with an air of polite restraint. But not only optically the strange sausage beats the fans on the stomach. The price doesn't whet your appetite for more either. According to statements by Brazilian supporters under the Twitter post, the snack, which takes some getting used to, costs the equivalent of a whopping nine euros.

Superstar Lionel Messi did not expect the German national football team to fail again early on. "Yes, I was surprised," the 35-year-old Argentinian captain told Olé. This time, the South Americans have already reached the quarter-finals, the DFB team had to leave after falling out of the group.

Germany has "many important players" and a young team. "And Germany is always among the best," said Messi, who failed in the quarter-finals in 2006 and 2010 and in the final in 2014 against the German team. The fact that she has not reached the knockout stages like in 2018 is surprising, but also shows how difficult this World Cup is "and that the name of a team is not important".

Messi had traveled to Qatar with his Argentines after 36 games without defeat shortly before setting the world record (37 by Italy). In the first group game, the South Americans were embarrassed and put themselves under a lot of pressure with a 2-1 draw against outsiders Saudi Arabia. After that, Argentina won three times and will now meet the Netherlands in Friday's quarter-finals.

Because of the riots following the last World Cup group game against Ghana (2-0), the Uruguayan Football Association must reckon with a penalty. The world association Fifa announced on Monday that it had initiated investigations. It is about possible violations of articles 11 (offensive behavior and breaches of the principles of fair play), 12 (misconduct by players and officials) and 13 (discrimination) of the Fifa rules and regulations. Separate cases have been opened against players José María Giménez, Edison Cavani, Fernando Muslera and Diego Godín.

After the final whistle, a number of Uruguayan players mobbed and harassed the Berlin referee Daniel Siebert and his assistant. Siebert had denied the South Americans a possible penalty in three scenes, Uruguay were missing a goal to advance.

Ex-Bundesliga professional Ivan Perisic has drawn level with the previous record goalscorer Davor Suker with his sixth World Cup goal. The 33-year-old Perisic scored the equalizer against Japan in the round of 16 to make it 1-1 (55th minute), his sixth goal at a World Cup. It was the Tottenham Hotspur striker's first goal at the World Cup in Qatar. Croatia's idol Suker also scored a total of six World Cup goals in 1998 and 2002. For the former BVB and Wolfsburg professional Perisic, it is currently the third participation in the World Cup.

Borussia Dortmund is asking its previously eliminated World Cup drivers to return to team training immediately. Not only are the five German national players Niklas Süle, Youssoufa Moukoko, Julian Brandt, Karim Adeyemi and Nico Schlotterbeck affected, but also the two Belgians Thorgan Hazard and Thomas Meunier as well as Giovanni Reyna (USA). The players are expected in Dortmund on Tuesday and should start team training on Wednesday. There are still training sessions until the end of the week. On Saturday, BVB will compete in a blitz tournament in Bucharest. Only then does the entire squad go on winter break until January 2nd.

A few disappointed Mexican fans have given Argentina national team coach Gerardo Martino a rather awkward welcome upon arrival in Mexico City. As Argentinian newspapers unanimously reported, the 60-year-old was also insulted by the supporters. Here and there, shouts from the small group can be heard in a video that the newspaper La Nacion also published online. Pressed by camera teams and fans, Martino tried to get out of the airport building but remained relatively calm.

He took over the Mexican national team in early 2019, and at the World Cup in Qatar the team was eliminated in the group stage after a 2-0 loss to Martino's home country Argentina. That also ended his contract.

"He knows that the negative environment and the failure make it impossible for him to continue," association president Yon de Luisa said in the World Cup quarter in Al-Khour near Doha. "We value him as a capable coach," said sporting director Jaime Ordiales. "But in football it's the results that count."

Before the start of preparations for the quarter-final smash against the Netherlands on Friday, Argentina's football stars have recovered on a feel-good day with family. Coach Lionel Scaloni had given the players a day off. "Moments," wrote Lionel Messi's wife Antonela Roccuzzo to a photo of the two from the South American World Cup camp in Doha and together with their three sons.

Messi himself, who also wore the official training clothes in the leisure photo, recently emphasized how much he enjoys the fact that his family is all in Doha and that his boys are also experiencing the World Cup from the inside.

England international and coach Gareth Southgate celebrated after Dortmund's Jude Bellingham reached the quarter-finals. "Yeah, he's one of the best youngsters, definitely. I already praised him yesterday before the game. He's a fantastic player. He has everything it takes," said captain Harry Kane after the 3-0 win over African champions Senegal.

England celebrate a clear victory and meet France in the quarterfinals. Senegal misses good chances of taking the lead. Then the Three Lions demonstrate merciless efficiency. Bellingham initiates two goals fantastically. The highlights in the video.

The 19-year-old Bellingham contributed the assist to the first goal and also excelled with his ball control and his duel, with which he carried the initially weak Englishmen along. “His biggest strength is his mentality. The acceptance gave Jude more freedom. He used that exceptionally well," said Southgate.

Robert Lewandowski left the World Cup stage with mixed feelings. “On the one hand we can be proud, we tried everything. On the other hand, we lost,” said the world footballer after the 3-1 draw in the round of 16 against world champions France. While the French and their superstar Kylian Mbappé are looking forward to the quarterfinals against England, Poland is going home.

"I would have liked to have stayed longer at the World Cup, but in the end we achieved our goal," said Lewandowski. "When you play against the world champions, it's always tough." The 34-year-old left it open whether the star of FC Barcelona will also be at the tournament in the USA, Mexico and Canada in four years' time if the national team qualify successfully.

Former DFB President Reinhard Grindel does not believe that national coach Hansi Flick will be replaced because of Germany's failure at the World Cup in Qatar. "It is clear to me that Hansi Flick will not be released after such a short time, so you have to give him a long-term chance," said the 61-year-old of the German Press Agency, referring to parallels with the preliminary round in 2018 and the national coach at the time Joachim Löw. "The fact that the players speak out for him was also the case with Joachim Löw," said Grindel.

The former member of the Bundestag was President of the German Football Association until his resignation in 2019. In the summer of 2018, the association initially had to deal with the crisis surrounding the joint photo of Mesut Özil and Ilkay Gündogan with Turkish President Recep Tayyip Erdogan before the World Cup - and then with the consequences of the first failure in a World Cup preliminary round.