After the Ahr catastrophe, this 19-year-old developed a special anti-tipper

Denis Drosdzol witnessed a catastrophe that cost the lives of more than 180 people: the flood of the century in the Ahr valley. 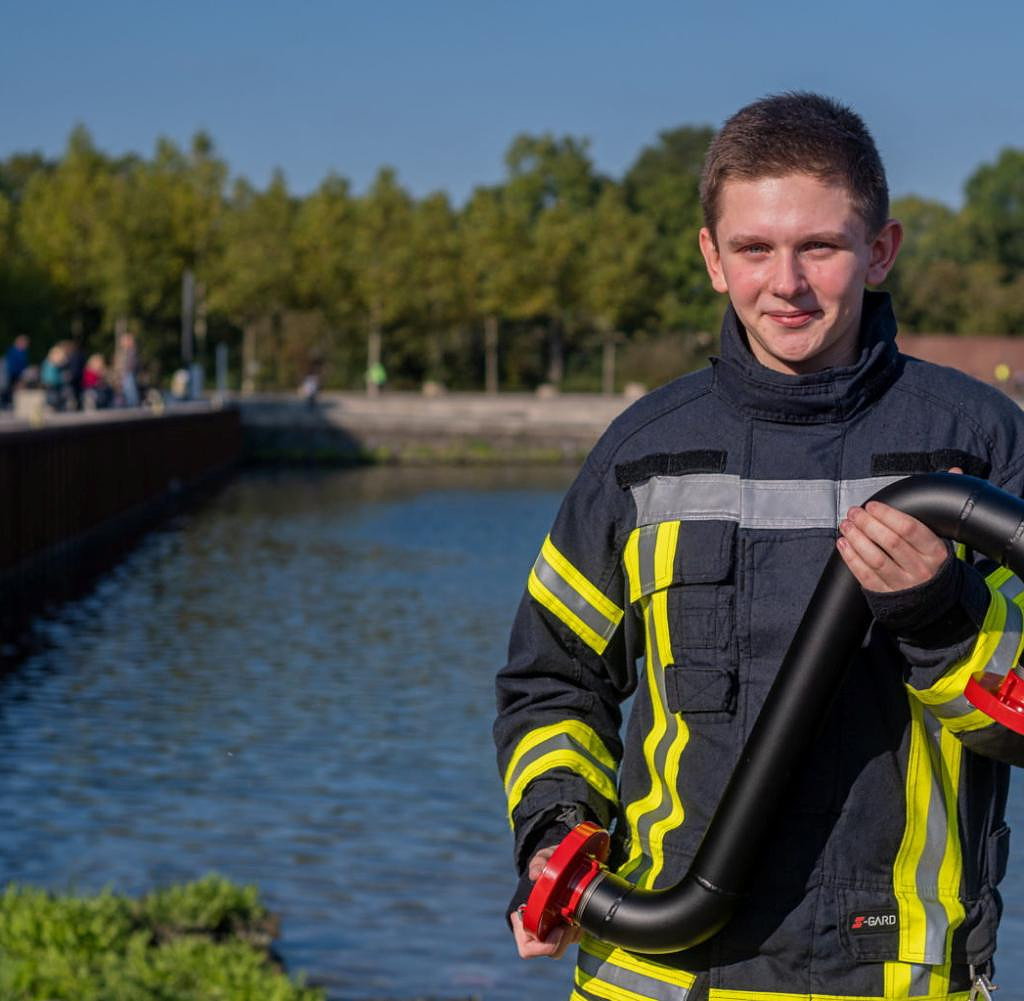 Denis Drosdzol witnessed a catastrophe that cost the lives of more than 180 people: the flood of the century in the Ahr valley. As a member of the voluntary fire brigade, the then 19-year-old rescued people from their homes in a new development area in Eschweiler near Aachen in the middle of the night. The water was up to his chest by then. Meanwhile, cars, debris and sofas were swept away past him.

His shift had only just begun, as he tells "Gründerszene": More dramatic rescue measures followed, including in a retirement home and in front of the Eschweiler hospital, because the flood there destroyed the entire basement of the 400-bed hospital.

"Our task was to clear the street in front of the hospital of water," says Drozdzol. Rescue vehicles could not cross the street without slashing their tires with broken glass.

So Drozdzol grabbed the submersible pump from the fire engine to free the streets from the water masses. This is part of the standard fire department equipment.

However, the pumps have a problem, as Drozdzol found out during the crisis operation: "Our submersible pumps kept tipping over." As a result, they do not work properly and have to be set up again by one person.

However, this can be really dangerous, for example when objects such as cars, furniture or broken glass are floating through the water. Anyone who then injures themselves and comes into contact with contaminated water has a problem.

"There has to be another way," thought Drosdzol, who is currently in his fifth semester studying process engineering - and less than 24 hours later after the assignment built the first prototype of an anti-tipping device for the submersible pumps. He put it together from old pipes and did initial tests in the pool at the fire station. It doesn't matter how high the water was - whether 50 cm or 3 m high: "The anti-tip device stayed put," he says.

“The thing is a simple tube. If you turn it upside down, you might think it's a siphon," says Drozdzol, describing his invention. The S-shaped tube is designed to prevent the submersible pumps that sucks the water from tipping over, it serves as a connector between the submersible pump and the hose through which the water is pumped out and transported away.

For months after the flood disaster, the founder not only carried out tests and calculations on land and in the water, but also on the computer to calculate the statics of the S-tube, among other things - as he also knows from his engineering studies. His start-up Lenz Technology was finally founded in March 2022.

Since then, two of the stainless steel pumps have been used and tested by the Gelsenkirchen fire brigade. Four manufacturers from North Rhine-Westphalia produce the anti-tipper on request. The founder initially paid for the costs himself. At 499 euros per piece, the production is not necessarily cheap.

This is mainly due to the high raw material prices on the world market, explains Drozdzol. That is why he is considering switching from stainless steel to aluminum in order to be able to produce more cheaply. When selecting the raw material, it is primarily important to the 20-year-old that the materials come from Europe so that he does not become dependent on other countries.

Floods and floods are no longer a rarity in Germany. According to the federal government, extreme weather events have even doubled in the past 30 years.

Experts agree that this trend will continue in the coming years due to climate change. And so falling pumps are a particular thorn in Drozdzol's side. Because they hinder the work of the fire brigade, to which he also belongs.

The 20-year-old sees great potential for his self-developed anti-tipper due to the increasing floods. Also because there are more than 65,000 fire engines in this country, as Drozdzol calculates. Vehicles from other aid organizations such as the Federal Agency for Technical Relief or the German Armed Forces, which are deployed in the event of serious disasters, are not yet included. "It's a million-dollar business," believes the founder.

‹ ›
Keywords:
TexttospeechGründerszeneStartupsAhrtalFeuerwehrPumpenLenz TechnologyEschweilerApple PodcastEuropaKrimiDenis DrosdzolAutoAachenBundeswehr
Your comment has been forwarded to the administrator for approval.×
Warning! Will constitute a criminal offense, illegal, threatening, offensive, insulting and swearing, derogatory, defamatory, vulgar, pornographic, indecent, personality rights, damaging or similar nature in the nature of all kinds of financial content, legal, criminal and administrative responsibility for the content of the sender member / members are belong.
Related News