Several think tanks feared a troubled post-election period, which could even have led to acts of violence, in a country still traumatized by the violent assault on the Capitol by supporters of the former Republican president, on January 6, 2021 in Washington. 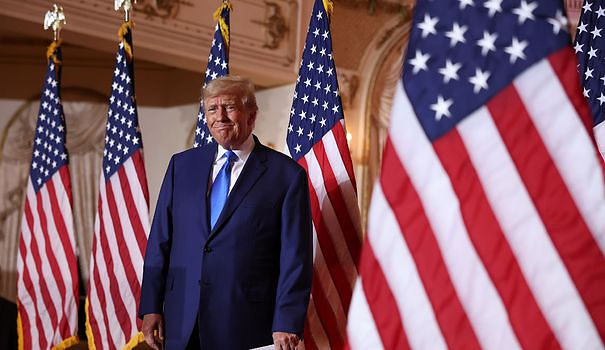 Several think tanks feared a troubled post-election period, which could even have led to acts of violence, in a country still traumatized by the violent assault on the Capitol by supporters of the former Republican president, on January 6, 2021 in Washington. .

And this all the more so as Donald Trump and some of his supporters had begun to seize on a few isolated incidents in the polling stations, particularly in Arizona, to denounce again without proof a cheat in favor of the Democrats, as after the 2020 presidential election.

But the misinformation campaign seemed to run out of steam once many of Donald Trump's candidates were defeated at the polls.

According to Zignal Labs, a company that monitors internet activity, there were 600,000 mentions of voter fraud or similar ideas on Twitter in the week following the November 8 vote, more than six times fewer. than during the same period after the 2020 election.

Donald Trump, who frequently uses his Truth Social platform to argue that the 2020 election was "stolen", himself seemed to refrain from doing so during the speech in which he announced on Tuesday that he would be a candidate for the third time in the presidential election of 2024.

"A portion of the Republican Party believes that embracing these narratives has demoralized the base, reduced turnout, and elevated low-quality candidates," said Michael Caulfield, a researcher at the Center for an Informed Public at the University of Washington. Washington State. "This section of the party needs to talk about these losses, to present arguments in favor of a new leadership of the party," he added to AFP.

In fact, the "red wave", the color of the Republican Party, predicted by conservatives and political observers, did not materialize during these midterm elections, with the Democrats narrowly retaining the Senate and not losing only with a narrow gap the House of Representatives.

In another setback, several candidates backed by Donald Trump have failed in races for local secretary of state seats -- crucial posts as they oversee elections -- including in states where the former president tried to overturn the result of 2020.

"People made it clear by their vote that they didn't want candidates who deny the election results supervising the polls, and even more so in disputed states where it was a possibility," Pamela Smith told AFP. , president of Verified Voting, a non-partisan organization.

The Republicans' mixed result provoked soul-searching even among the party's hard fringe in Arizona, where Donald Trump's protege, Kari Lake, lost the race for governor of the state.

“We wonder now if we were not in an echo chamber” where the ideas would be reinforced by force of repetition, declared the republican state senator, Wendy Rogers, on a conservative radio station, seeming refer to his party's message.

Disinformation specialist and associate professor at the State University of Washington, Kate Starbird finds it "comforting" to see some right-wing influencers walk away from unfounded claims of voter fraud.

“Maybe they feel it's not a winning political strategy,” she says.

But analysts say the impact of rhetoric refuting the election result has not waned and could gain further momentum ahead of the 2024 presidential election.

They estimate in particular that during the midterm elections, Donald Trump was deprived of a cumulative audience on social networks of 100 million people, including influential members of his camp, because he remains banned from Twitter. and Facebook.

The audience he has on his own Truth Social network is much lower (4.5 million).

"The underlying (conspiratorial) engine continues to run, and if influencers decide to engage with it, we're instantly back to where we started," says Michael Caulfield. "By now, many have decided that the game is not worth the long-term candle. We'll see if that holds up as Trump commits to 2024."