After Kenzo and Miyake, Japanese fashion is entering a new era

The death of Kenzo Takada in October 2020 and then that of Issey Miyake in August mark the end of an era, after the revolution generated in the 1970s and 80s by Japanese fashion designers in France and around the world. 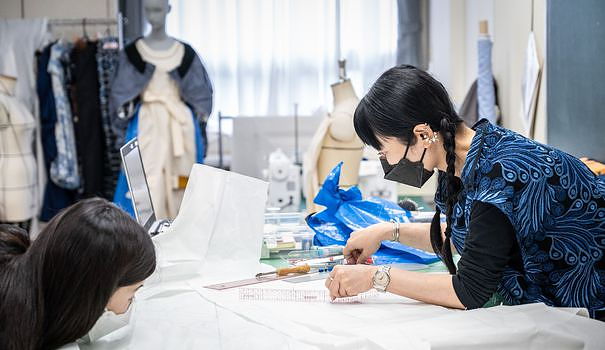 The death of Kenzo Takada in October 2020 and then that of Issey Miyake in August mark the end of an era, after the revolution generated in the 1970s and 80s by Japanese fashion designers in France and around the world.

This raises expectations for a new generation of designers like Takuya Morikawa, a 40-year-old Bunka alum whose chic streetwear-inspired garments debuted on Paris runways two years ago.

Before launching his brand TAAKK in 2013, he spent eight years in Issey Miyake's studio, working on the famous "Pleats Please" line and exploring traditional artisanal methods.

Mr. Morikawa was affected by the death of his mentor. "We must do our best so that the death of these designers does not have an impact on the fashion world. If this happens, it means that we are doing our job badly".

Another to have taken up the torch is Nigo (real name Tomoaki Nagao), who rose to prominence in the 1990s with his streetwear label A Bathing Ape.

Also a graduate of Bunka, he was appointed artistic director of Kenzo last year.

Kenzo and Issey Miyake set out to conquer the world from Paris, as did Japanese haute couture pioneer Hanae Mori, who died in August at age 96. Yohji Yamamoto, now 79, and Rei Kawakubo, 80, founder of Comme des Garçons, still symbolize this golden generation.

However, "the time when a designer presents a collection that everyone wears is over". In question, the multiplication of the offer "and not a decline in talent", estimates Ms. Aihara, for whom it is now also essential to have commercial knowledge before launching a competitive brand.

Designer Mariko Nakayama, who worked for a long time as a stylist in the fashion world in Tokyo and plans to launch her brand in France, remembers having "goosebumps" when wearing Comme des Garçons for the first time.

She also feels that the industry is different today.

"Looking at Virgil Abloh for Louis Vuitton, for example, I feel like we've entered an era of editing," where designers are putting modern twists on classic shapes and patterns, she says in her shop in the chic district of Omotesando in Tokyo.

Because working in Paris, London, New York or Milan is still considered the key to success for Japanese designers, explains Aya Takeshima, 35, who studied at Central Saint Martins in London.

"In Japan, it seems that we inculcate the technique first. Ideas and concepts (...) are secondary", while it is the opposite in London, according to her.

Also aware of the need for its students to be open to the world, Bunka plans to offer a study abroad scholarship as part of its 100th anniversary celebrations next year.

For Natalia Sato, 21, one of her students, Issey Miyake and the old guard "brought a lot of Japanese and oriental values ​​to the world", including techniques inspired by rich and subtle traditional craftsmanship.

“I am worried that the foundations they have built could be destroyed with their disappearance”, but “at the same time, it is a turning point” which could offer new creative opportunities, she judges. "It's a chance for me to reflect on how we can create new values."