Mama and Hitler, that's all he has in mind, some say about Jonathan Meese. 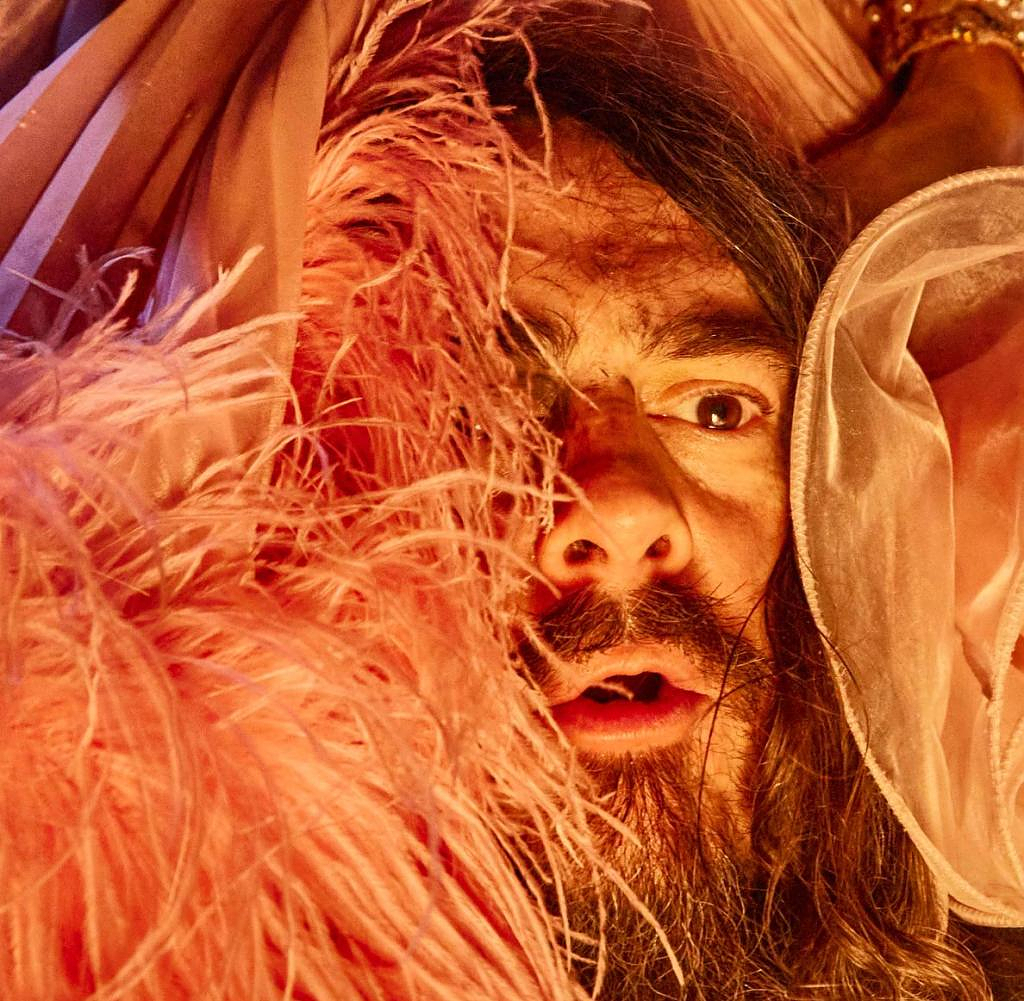 Mama and Hitler, that's all he has in mind, some say about Jonathan Meese. It may be a cliché, but it's not entirely out of the blue. When the neo-Dadaist retreat master Meese invites you to the Volkstheater Wien for the “universe premiere” (“permanent duration, no break”, as the program sheet reveals), you don’t have to wait long for the first Hitler salute (estimated five minutes).

The mother, Brigitte Meese, only appears towards the end of the three-hour show (but not indefinitely, fortunately). What the provocation-worn audience acknowledged with benevolent applause. "Here comes the mother, she's the leader," her son calls into the microphone, wide-eyed, sitting on a rocking horse with a plastic Kalashnikov.

Ballaballa, art event or critique of ideology? No one manages to get this question into his audience's brains like Meese, who was born in 1970. This is meant in a completely non-metaphorical way: After the first Hitler salute, a crime outside the theater stage (Meese has already won several court cases), the extreme artist levels off at five HPM (Hitler salute per minute).

What is the nonsense? That is the question. One thing you have to know about the Meese method: Everything should come out here, obsessions, fears, fixations, pathologies. Somehow it fits the city where not far away Sigmund Freud founded the dissection of the soul through free association. Better than running rampant in the unconscious and poisoning the conscious.

There is also free association on stage: France, Germany, Hollywood, art, communism, mother, Führer and also Nabokov's "Lolita". More is not possible. The official title of the evening is, in all caps, "Barrier Reef (The French Revolution is Back) The Riders of Dead Coral - Revenge (Revenge)". And that's just the short version.

Meese walks through the area – first in a Napoleonic uniform, then in a Waffen SS costume – surrounded by Lilith Stangenberg, Bernhard Schütz, Maximilian Brauer and Uwe Schmieder, who start off with such infernal shouting and babble that after just one Fifteen minutes, the first of the audience, unnerved, start to flee.

When the first rows are thrown with pieces of baguette, some fly back immediately. A young man sees the opportunity for a big performance and steals a plastic pistol from the stage, which he waves towards the stage, goggling up and down. A theater employee makes it clear to him that such an expansion of the performance is neither planned nor desired, the toys have to be handed in at the front again.

Shouts of "Pfui" ring out from further behind, which are answered in a friendly manner by the stage. A few decades of avant-garde theater have left their mark, everyone knows how to play their roles – from insulting the actor to insulting the audience and back. Does anyone else feel deeply attacked and shaken?

The evening, as the program leaflet also informs, does not follow a fixed concept, but arises as an “unrepeatable one-of-a-kind” from the ideas of the players, who can make use of an extensive costume and props pool on stage. One would have suspected or feared this even without notice.

Once a later blackfaced lederhosen Little Red Riding Hood asks if anyone here understands anything. The seat neighbor sighs: "The first reasonable sentence tonight!" A ball of wool rolls around, but no one can grasp the red thread.

Above the stage the lettering "Kunstterror = Terrorkunst". Abba's "Dancing Queen" runs in a continuous loop, then the Horst Wessel song is sung again. Everything that could formulate claims of the mind slowly dissolves in one. Does one have to feel like this to be susceptible to fascist hysteria?

"Germany will revalue everything!" Meese evokes the "Gesamtkunstwerk Deutschland". If you dare to examine "Barrier Reef" for traces of content, you might even find something. German romanticism, with its artistic totalitarianism, was in fact a response to the internal affairs of the French state, a revenge on the French Revolution.

But in place of the fundamental political break, harmony, unity and consistency were substituted. The "non-party state" of German art from Schlegel to Wagner was a metaphysical exaggeration that led to the real abyss. The counter program? "I want a crack to go through Germany," proclaims Meese, now at 15 HPM. The scary word about the "division of society" haunts the stage.

Meese performs a crazy paranoia. parties? Choose? It's all communism! Anything that threatens the unity of the “national body” is evil, i.e. communist. Anything that divides and alienates the nation, the imaginary mother, is to be condemned. Down with the individual, no more politics, back to the bubble where pre-Oedipal harmony reigns – with Mama and Hitler.

Meese runs through the regression once. It's sometimes so stupid that it can't help but hurt. Opinions differ on whether it is insightful. This concerns the question of how enlightenment works at all. Through Sunday sermons? In any case, there are no nice little sayings for the political poetry album (“Against hate, for diversity”) with Meese, instead there are endless abysses.

From Abba it goes to "Moscow, Moscow, throw the glasses on the wall", the stupid things on the stage become funnier (or are you already so over the top that you become less demanding?), it becomes more and more grotesque. Schütz licks Stangenberg's boots, Meese yells: "Suck the German people, suck it, suck it - suck it more French!"

If you say the same word 50 times in a row, it becomes absurd mishmash of letters whose meaning you can no longer testify to; the action on stage has now arrived on the stage. There is mutiny on the Bounty, but never in Germany, Meese lectures the room. However, he has to muster "German virtues" such as perseverance and willingness to suffer if you want to experience the final.

Just when the overwrought brain of the critic sparks that only Rammstein is missing to complete the spiral of obsessions, the first bars of "Sonne" from the album "Mutter" sound. Now it really rattles, Meese runs completely hot - feels like 50 HPM. "The leader is not dead, he comes in need and will take care of us".

Desire for deprivation meets phantasm of salvation, it goes straight to the heart of German neurosis. "The Führer is the mother of tomorrow", now comes Brigitte Meese, born in 1929. "Dance Adolf Hitler, dance him, mother", but the white-haired one is reluctant to be made into a dancing bear. Her attempts to flee the stage with unsteady steps are unerringly thwarted by her son. He hands her a plush Blondi, she resigns.

The audience – animated by similar escape reflexes – begins an exodus, with the fourth time “Sonne” even the ambitious supporting actor leaves the hall from the front row, and a few indestructibles sing along in the ranks. With the first notes of the seventh repetition, a final mass flight begins, and there is dancing in the tier. The fog machine is started again. It's a mind-crushing carnival that leaves you shattered.

What does this grotesque mixture of clownish Nazi karaoke, public therapy session and absurd propaganda loop teach you? With a little imagination, at the sausage stand it feels like a mental vaccination: a small dose of the pathogen to strengthen the immune system.

Will one now involuntarily flinch when hearing the word "Germany" (and what it is, wants and will)? At least one conceivable short-term consequence of the Meese brachial treatment, perhaps a desired one. A few fans still want autographs, then the cheerful spectacle expert Jonathan Meese disappears into the night - with his mother, who still has the cuddly toy German Shepherd under his arm.

The crazy artist, what craziness in reality does he want to warn us about when he puts on the swastika bandage on stage? The riddle Meese, it will not be solved this evening either. But it got a new theatrical chapter, the next performance is in February. Then it says again: Nothing about Mama and Hitler.

‹ ›
Keywords:
Burgtheater WienWienHitlerAdolfMeeseJonathanHakenkreuzSchmierereienHolocaustLeugnung
Your comment has been forwarded to the administrator for approval.×
Warning! Will constitute a criminal offense, illegal, threatening, offensive, insulting and swearing, derogatory, defamatory, vulgar, pornographic, indecent, personality rights, damaging or similar nature in the nature of all kinds of financial content, legal, criminal and administrative responsibility for the content of the sender member / members are belong.
Related News