Operation rescue is still ongoing in Paktika and Khost provinces, which were both completely destroyed by the earthquake that struck at 5. 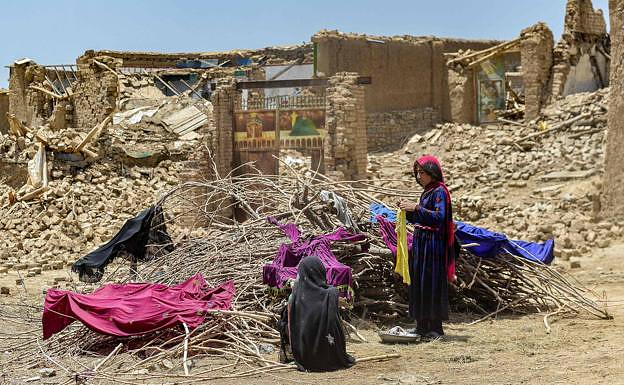 Operation rescue is still ongoing in Paktika and Khost provinces, which were both completely destroyed by the earthquake that struck at 5.9 on Richter scale. Because no machinery or help has been available to address the worst earthquake in Afghanistan's history, the Afghans are helping survivors and removing bodies from rubble.

Although the authorities claim that there were at least 1,000 deaths and over 1,500 injuries, it is possible that this number will rise significantly. Ground zero is Gayan in Paktika province, at the border with Pakistan. There, "entire villages were razed" according to Abdul Qahar Balkhi (a spokesperson for the Ministry of Foreign Affairs). The last hour of heavy rains has made it more difficult to locate people alive.

On Wednesday, the Emirate authorities contacted the UN for assistance. However, they stated that the Taliban had not requested the UN to mobilize rescue teams or obtain equipment from neighbouring countries. Ramiz Alakbarov, the second commander of the mission in Kabul declared that the UN was able to assure them that the Taliban had not yet made a formal request. According to local media reports, humanitarian aid planes from Iran, Qatar and Turkey have arrived at the capital's international airport. The Turkish authorities were also present on Thursday and expressed their willingness to offer "any kind" of assistance. Turkey has a lot of experience in earthquake rescue and it has good teams. Its legation in Kabul is also open so that it could coordinate the arrival with the Taliban.

International donors have reopened their dilemma after the earthquake. They have cut aid to de facto authorities since the Emirate's arrival, as they don't trust them. It is worrying that money is not allocated to the most important areas. That is why international organisations are seeking other options to help the organizations on the ground without going through the Taliban, a terrorist and misogynist organization. . Civilians are left in this pulse, hostages to everything and paying consequences", says Ana Ballesteros (Senior researcher at Cidob) with extensive knowledge in the region.

Ballesteros believes that the current Afghan leaders don't care about the deaths of the hungry. They are only interested in international legitimacy to get investments and aid. They will not be softened by this earthquake.

Although the affected areas of Tuesday's earthquake in the southeast are located only 160 km from the capital, the poor communication infrastructure, bad weather, and lack of resources have made it difficult for victims to reach the capital. Zabihula Mujahid (Ministry of Defense) announced that five helicopters were dispatched and that eight trucks carrying food had been sent to the affected areas. More than a third cannot afford their basic needs in this country. The economy is also in serious crisis since the Taliban took control of foreign aid. In each of their interventions following the earthquake, the heads of Emirate insisted on the severity of this blockade in international funds for the entire population. However, they refuse to accept concessions in a government program which includes the closing of high schools for girls.

Afghans are subject to misfortune after another. Provinces like Khost provide refuge for thousands of refugees and internally displaced people who have come from Waziristan on the other side. These people live in straw and mud houses. The villages are far from hospitals and clinics, so evacuations to medical centers can be very complicated.

A survivor identified as Hakimula said that he had spoken out to The Guardian to say that he asked the Emirate authorities and the whole country to help him. "We have lost everything, and don't even own a tent to sleep in," Hakimula stated to The Guardian newspaper. BBC network envoys had also access to survivors, who complained that there were no shelters, blankets or tents. We need water and food. All is destroyed, all houses are gone."

‹ ›
Keywords:
AfganosQuedanSolosRescateVictimasTerremoto
Your comment has been forwarded to the administrator for approval.×
Warning! Will constitute a criminal offense, illegal, threatening, offensive, insulting and swearing, derogatory, defamatory, vulgar, pornographic, indecent, personality rights, damaging or similar nature in the nature of all kinds of financial content, legal, criminal and administrative responsibility for the content of the sender member / members are belong.
Related News