Adrenalin kicks with ice climbing at the waterfall

Where the water falls over rocks in summer, bizarre walls of glittering ice lure you to adventurous climbing tours in winter. 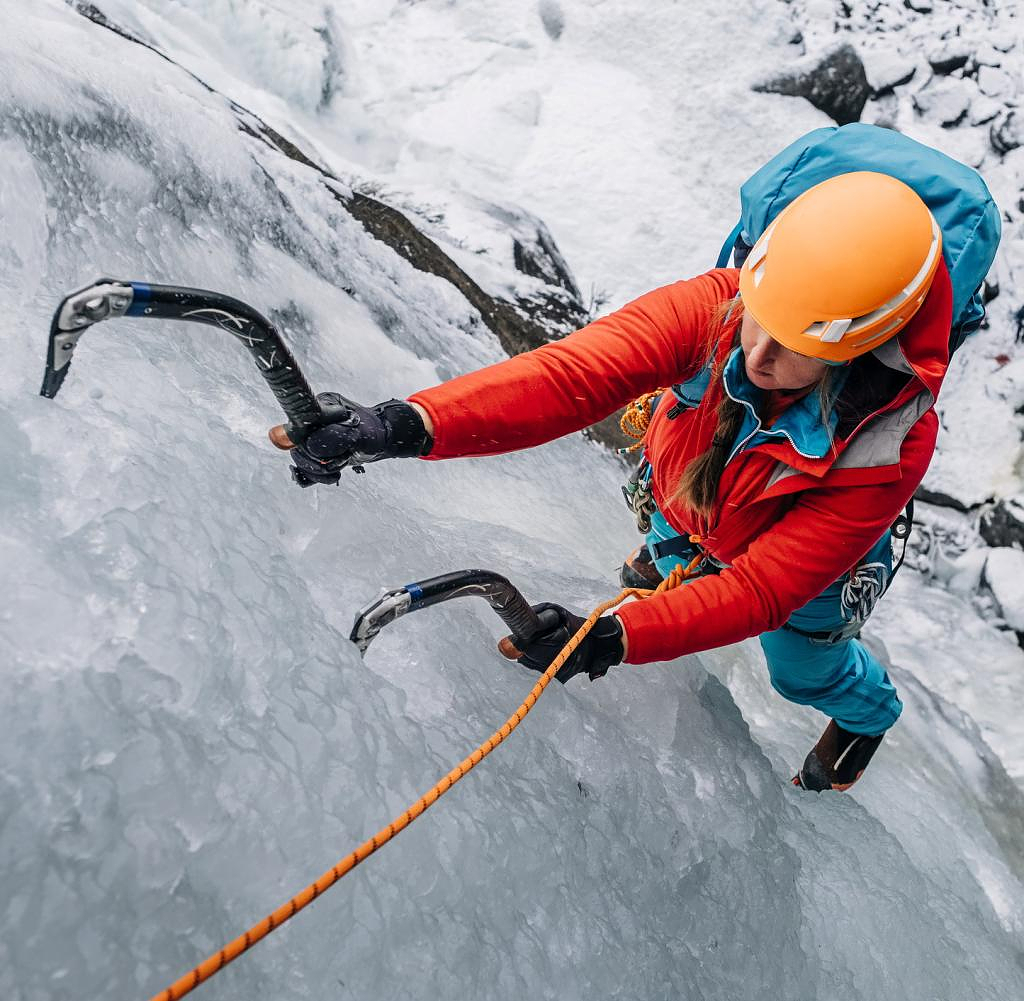 Where the water falls over rocks in summer, bizarre walls of glittering ice lure you to adventurous climbing tours in winter. Provided, of course, that it is below zero. Climbing up icy rock faces, climbing the cascades of a frozen waterfall with pickaxes and crampons and exploring your own limits has been attracting more and more adventurous climbing fans in recent years.

But it's not enough to just put your irons under your hiking boots and start scrambling. Beginners in particular are in good hands at the mountaineering schools, which offer special courses to help you get started with the chilly sport of climbing. Experienced climbers will have fun with like-minded people on guided tours.

The mountain world in Pitztal in Tyrol is no longer an insider tip, but - also because of the "Eis Total Festival" in January - a real scene Mecca: More than 40 ice falls, which usually freeze from December, make the region an ice climbing paradise. The Fallenbach Falls, the Stuiben Falls, the Eggenstall Falls or the Dorfbach Jerzens inspire beginners and climbing pros alike with varied tours.

This is especially true for the Taschach Gorge, a real ice climbing jewel. The gorge is easily accessible and ideal for trying out this cool sport. Ice climbing veteran Alfi Dworak and his colleagues from the "Pitztal Mountain Guides" teach their guests the basics of ice climbing in private and group courses and show them how to use ice tools, crampons and ice screws correctly and guide them through various ice falls in the region. Day tours for one or two people cost from 400 euros, the exact price is agreed individually according to the planned route and desired program.

Ice climbing fans will also find some exciting climbing areas with different degrees of difficulty in the Austrian state of Vorarlberg. The newly built ice climbing garden on the Silvretta-Bielerhöhe in the Montafon is ideal for training and practicing ice climbing. But the partly vertical ice pillars of the up to 25 meter high and about 35 meter wide climbing facility next to the Madlenerhaus also offers advanced climbers one or the other challenge.

Tip for beginners: From the end of December to March 1st, there is a taster day in the climbing garden every Thursday. The turquoise-blue glittering "curtains" and ice pillars in the gorges of the Warth-Schröcken ski region rise up to 300 meters, the villages on the Arlberg are an ideal location for fans of this sport because of their many attractive icefalls. On introductory tours, beginners learn how to use ice tools correctly (pickaxe, ice screws, crampons) and slowly feel their way to the climbing adventure on the ice fall.

The Flurschrofa climbing area in Brandnertal attracts advanced and experienced climbers. Here, on the north side of the Rätikon, is the showpiece of ice climbing in western Austria. Where the water usually roars over the rocks, blue ice shimmers on the rocks in winter: more than 30 ice and mixed routes can be found here in a very small area - from easy beginner tours to extremely difficult variants, which also provide thrills for passionate ice climbers care for.

The BergAktiv Brandnertal and Free Motion sports schools offer ice climbing courses and individual tours. And as everywhere where nature acts as the master builder, the same applies here: depending on the weather and sub-zero temperatures, the climbing area always presents itself differently.

Around 80 routes of various levels of difficulty await ice climbing fans in the East Tyrol Ice Park, a 20-minute walk from the Matreier Tauernhaus. The artificial ice falls, which are created by the finest drizzle from pipelines, ultimately add up to a large-scale climbing wall through further processing steps.

The ice park, which is the largest man-made park of its kind in Austria, is considered "ice-safe" and should "be able to be climbed even in cold winters", as Vittorio Messini and Matthias Wurzer from the Kalser mountain guides who run the park launched in autumn 2015.

Outside of the ice park, a number of icy waterfalls await climbing freaks in East Tyrol. A highlight is the ice climbing festival with taster courses and workshops, which will take place for the sixth time from January 13th to 15th, 2023 after being canceled for the past two winters due to the corona pandemic.

The Pontresina region in the Swiss canton of Graubünden is also a paradise for ice climbing, where ice-covered rock walls and rows of frozen waterfalls invite you. Mighty walls of ice with imposing icicles form every winter in the Pontresina Gorge. Dedicated mountain guides help out here by working the rocks with water so that the ice is optimally thick. They have therefore played their part in the fact that the region has developed into an ice climbing center in the Engadin.

The Pontresina mountaineering school offers climbing courses and rental equipment. It is expressly pointed out there: If you want to try out the extreme sport of ice climbing, you should have knowledge of alpine climbing, a head for heights and good physical fitness. Tip: A special experience is the highest irrigated ice climbing wall in the world at the Corvatsch mountain station. The ice wall right next to the panorama restaurant is around 50 meters long - and changes naturally every day.

Despite growing popularity among sporty vacationers, ice climbing is not specifically advertised by tourism associations in many regions. But it's worth asking, because the local staff know which mountaineering schools offer courses and tours. Climbing fans are in the best of hands here:

‹ ›
Keywords:
SchweizÖsterreichLänderporträtsEiskletternWintersportGraubündenRegionenporträts
Your comment has been forwarded to the administrator for approval.×
Warning! Will constitute a criminal offense, illegal, threatening, offensive, insulting and swearing, derogatory, defamatory, vulgar, pornographic, indecent, personality rights, damaging or similar nature in the nature of all kinds of financial content, legal, criminal and administrative responsibility for the content of the sender member / members are belong.
Related News