Wednesday appears "Le Bébé des Buttes-Chaumont", 10th and last volume of the adventures of a young woman also seen in the cinema. 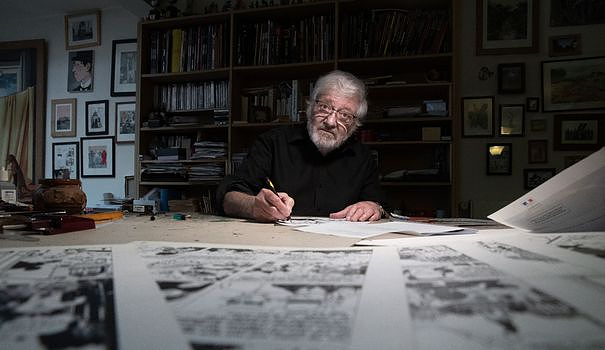 Wednesday appears "Le Bébé des Buttes-Chaumont", 10th and last volume of the adventures of a young woman also seen in the cinema.

"I always said that I would make ten albums, and not one more", reminds the author to AFP, after a break of 15 years.

In the meantime, he devoted himself to his father ("Me, René Tardi, prisoner of war at Stalag II-B") or to his wife, the committed singer Dominique Grange ("Élise and the new partisans").

"Thus ends, forever, the Extraordinary Adventures of Adèle Blanc-Sec. Beware of forgers who would be tempted to follow up!!!", warns the last page.

Knowing the fate of a Franquin who had asked not to revive Gaston Lagaffe, but finds himself disavowed post mortem, "it does not worry me", specifies Tardi, 76 years old.

"But I find that even if we adore Mickey or whoever, it's not very glorious to hang your wagons behind the work of another (...) I would like Adele to escape that “, he asserts. On the other hand, "nothing prevents me, in the same spirit, the same time, from using other characters who have not really been exploited".

"Immortelle Adèle", as the song recorded on this occasion by Dominique Grange says. CDs will be distributed to fans during the signing sessions.

Even frozen all the time of the First World War, even pursued by the worst mobsters of her time, the heroine was not dead. In this final episode, nothing can bring him down either: epidemic, toothache, explosive clones... and careless users of wooden scooters.

"We can't talk about a scenario built on a plumb line. That's what the soap opera is: we go in one direction, we run behind the characters, and they tend to take their autonomy a little bit. them who lead the dance," Tardi describes.

"I also introduced scooters everywhere, in the 1920s. You can clearly see the source of inspiration!"

She is in the streets of Paris.

Installed in a studio on the slopes of Ménilmontant, in the east of Paris, Tardi constantly confronts the city as he sees it with that fixed by the lens of photographers or the brush of artists.

Its collection of fine books and illustrated monographs on Paris, from all periods, from all angles, impresses the visitor. Just like the aspect of eternal building site of this place of life and work, not without recalling the disorder of the capital.

"Locations are very important: I walk around, I want to use such a perspective, such a building, pleasant to draw, but useful for the plot. It's interesting for me to use these places, and to twist a little", confides the designer.

He was delighted to read a fan who, crossing the Pont Neuf every morning, told of regularly putting his finger in a hole at the base of a lamppost. Just in case, as in an episode of Adèle Blanc-Sec, it opens a secret passage.