A young Belarusian returns from the front in Ukraine with shrapnel in his legs, but "without regret"

"I wanted to stay but the doctor said no (. 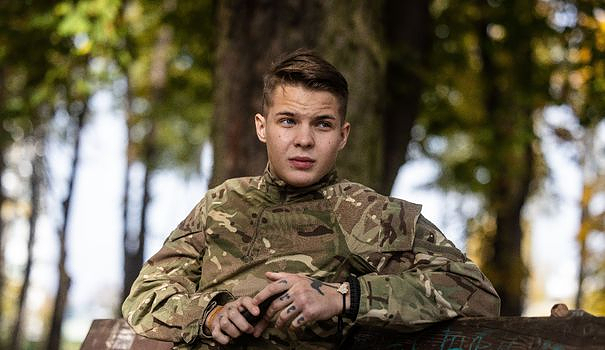 "I wanted to stay but the doctor said no (...) because I was mentally agitated, he says, explaining: "I lost a lot of friends there. My commander too."

"Before the war, I thought I was at peace with the fact that death is death and everyone ends up dying. But it was too much," he told AFP who met him. in the Polish town of Grojec, where he found his new home.

Hailing from Minsk, this soft-spoken young man is one of many Belarusians who, unlike their Kremlin ally leader, have chosen to side with Ukraine and take up arms to fight for freedom.

When AFP spoke to him for the first time in early March, the day he left for the war, he said he had volunteered to want to "fight for Ukraine but also for Belarus". .

"Because our freedom also depends on the situation there," he said.

Mr Gunko, who had his knuckles tattooed with words 'Born free', left his homeland in 2020 after President Alexander Lukashenko launched a fierce crackdown on opponents of his rule.

At the head of the country for decades, the Belarusian leader has since been condemned internationally for having supported the invasion of Ukraine by Russia.

Although he is opposed to the Minsk regime and the war in Ukraine, Mr. Gunko says he feels responsible for what is happening as a Belarusian citizen.

“I feel guilty that missiles are being fired at kyiv from Belarus,” he says, “I did a lot to make Belarus free, but not enough.”

"I could have done more," he adds about his four-month stay in Ukraine.

Mr. Gunko went to war through the Belarusian House Foundation in Warsaw, an NGO that works for human rights and democracy in that country.

Since the start of the invasion of Ukraine, she has been handling the logistics of sending volunteer Belarusian fighters to Ukraine.

"Belarusians are not able to help Ukraine (officially, editor's note) with weapons, as the whole world is doing, but they cannot stay away, so they will fight for independence of the sister country", declared this NGO on Facebook.

After arriving in Ukraine, Gunko underwent 15 days of military training. He then fought alongside other international volunteers in Kyiv as well as in the trenches around Kherson.

He said he saw many dead civilians in the kyiv suburb of Boucha, where hundreds of bodies were discovered after the Russian army was driven out in March.

"We were arriving by car and I saw children at a bus stop. (...) The child waves, smiles and I see that right next to it, there is a person lying down, without a head", remembers Mr. Gunko.

"It was hard", he adds with a sigh, before summing up what he saw in Boutcha in one word: "terror".

He recalls other traumatic moments, such as being fired upon for hours from a BMP-3 infantry fighting vehicle, the explosion of which left him with pieces of shrapnel still lodged in the legs.

He also saw Russian troops shoot down a British sniper near Kherson, a comrade of his, whose body he later helped carry.

Far from the battlefield, the young man recounts the months spent on the front lines, sitting in a park on the ground strewn with chestnuts and autumn-colored leaves in Grojec, a town south of Warsaw where he has led a quiet life since his back in July.

A crew cut, dressed in a combat uniform, he keeps rubbing his hands and shuffling his feet, visibly thinner and more contained than when he went to war.

"The army makes you a better person. I have changed, yes. Everyone says so, he explains, I am calm. I think a lot".

And to add: "It's like in war. I watch people, I wait to see what will happen, and I guess I expect it to be bad."