A tiger in the computer: artificial intelligence against feline trafficking 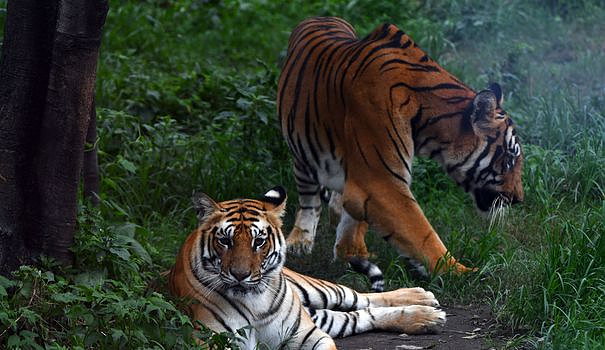 Bedside rugs, remains, stuffed animals: thousands of photos are thus stored. It is the stripes of these animals that interest Ms Banks, head of the criminal unit of the Environmental Investigation Agency (EIA), an NGO based in London.

Fruit of evolution and helping these carnivores to blend into their habitat, "the stripes of a tiger are as unique as the fingerprints of a human", assures the activist, met by AFP in Montrose, in the North East Scotland.

“We can use the images to compare them to those of tigers in captivity, which may have been bred for commercial purposes,” she explains.

This is hard manual work so far, but a new tool developed by the Alan-Turing Institute for Science and Artificial Intelligence should simplify the process.

For this institution, it is a question of programming and testing an artificial intelligence capable of analyzing the scratches of felines to identify each individual.

"We have a database of images of tigers offered for sale or seized" by the authorities, develops Ms. Banks: "when our investigators obtain new images, we can compare them to those of the base".

There are only 4,500 tigers left in their natural habitat in Asia, threatened by the deforestation of their habitat, but also and above all by poaching and trafficking.

The skins of tigers and some of their organs are highly sought after, particularly because of their use in traditional Chinese medicine.

"Tigers have suffered a massive decline in their population over the past 120 years, so we want to do everything possible to stop the trafficking", including that of skins, she said.

Holders of tiger photos are therefore urged to submit them to the EIA to strengthen the database.

This appeal concerns "people, whether photographers or researchers, in possession of images of tigers in which the shape of the stripes is clearly visible", specifies Ms Banks.

"Whether it's live or dead tigers, or parts of 'dead bodies,' if they can share (these images) with us, scientists will be able to develop, program and test the algorithm," she said: " we need thousands of images for this phase of the project".