"It's a piece of clothing that has a unique place in the history of fashion," Anna Jackson, head of the Asia department at the Victoria and Albert museum in London and curator of the "Kimono" exhibition, told AFP. 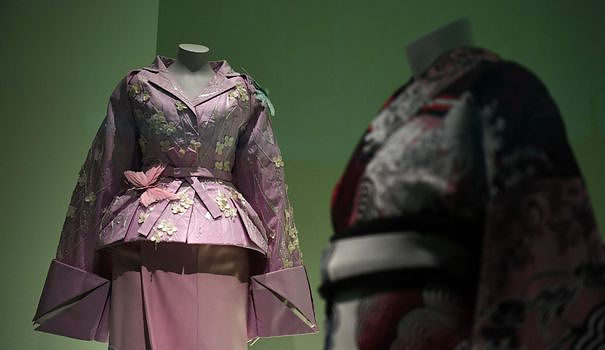 "It's a piece of clothing that has a unique place in the history of fashion," Anna Jackson, head of the Asia department at the Victoria and Albert museum in London and curator of the "Kimono" exhibition, told AFP. opens Tuesday at the musée du quai Branly in Paris.

With nearly 200 kimonos, some dating from the Edo period to the 17th century, and outfits he inspired in John Galliano for Dior or Alexander McQueen, the exhibition tackles the received ideas according to which this historical garment is frozen and "fashion is a European invention".

"The kimono appeals on several levels: it is decorative, beautiful materials, beautiful patterns. Japan is a country with an amazing and technologically advanced culture: there is a connotation of luxury. It is elegant and easy to wear", underlines Anna Jackson.

"You can translate it, transform it and wear it in different ways. It's very individual."

On a 17th century screen, we observe a party on a barge with diners eating and dancing dressed in sumptuous kimonos: this is the epitome of the Edo period (1603-1868), which arises after years of wars civilians and marked by economic growth, urban expansion and a thirst for leisure.

The samurai, these representatives of the military aristocracy, take care of their look in town. But it was the outfits of courtesans and kabuki theater actors, copied by the merchant class, that favored the extraordinary development of kimonos.

At the dawn of the 18th century, in Edo, present-day Tokyo, there reigned a bubbling culture intertwining entertainment, glamor and eroticism. Fashion flourishes.

"When we say fashion, we think of people with a bit of money asking for the latest styles, something new and different, led by celebrities and pop stars. That's exactly what happened. in Japan during this period," said Anna Jackson.

After seeing a pattern on the kimono of a popular kabuki theater actor, spectators tried to get the same one, if only on a handkerchief.

At the beginning of the 20th century, the straight shapes and the drape of the kimono began to have a profound influence on European designers.

T-shaped, the kimono does not follow the curves of the body and does not take into account the anatomical differences between men and women, unlike Western clothes.

To close a kimono, the waist is surrounded by a wide obi belt, more or less rigid, which constrains the gait of women. An imaginary exploited by couturiers like Jean Paul Gaultier, who for example merged corset and obi.

"By freeing themselves from the kimono in modern times, Japanese women have gained freedom (...), it was a gesture of emancipation. At the same time, Western women are beginning to adopt it", underlines Aurélie Samuel , ex-director of collections at the Musée Saint-Laurent in the exhibition catalogue.

In 1997, Björk posed in a kimono for the cover of her Homogenic album. Freddie Mercury wears kimonos on stage, but also in private.

In Japan, the wearing of the kimono experienced "a dramatic decline" after the 1950s, becoming reserved for female guardians of tradition and ceremonies. But fashion has returned in recent decades under the impetus of young Japanese people who reject Western "fast fashion" culture, says Anna Jackson.

The kimono is sold in vintage shops, rented or bought in its modern versions. And don't be afraid of being accused of cultural appropriation.

"Young Japanese designers want everyone to wear it. They want the industry to survive," concludes Anna Jackson.