A terrace is opened in the Poniente Pediatrics area.

New outdoor facilities have been added to the University Hospital of Poniente for children in the Pediatrics area, as well as their families. 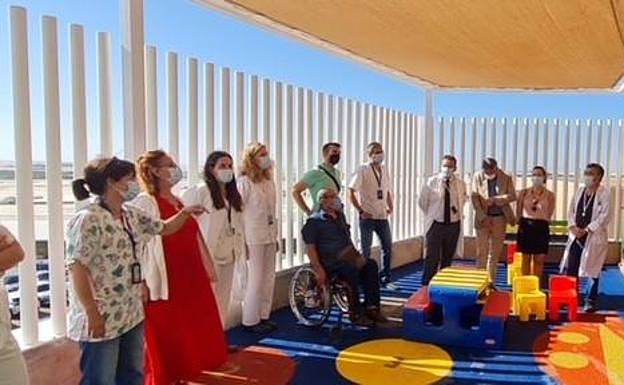 New outdoor facilities have been added to the University Hospital of Poniente for children in the Pediatrics area, as well as their families.

With the help of Nauni, the Kunpen Lama Gangchen and Murgi associations, the center created a play area on the terrace in the hospitalization wing.

The public was able to see the new facility last week. Juan de la Cruz Belmonte, delegate for Health and Families stressed this by saying that these facilities will improve the "quality of stay and quality of life" of children and families who spend time in the hospital.

The Health and Families delegate also stressed that this project was another example of the social benefits offered by collaboration between public and private entities. This helps to make projects such as these a reality.

Pedro Acosta, Poniente University Hospital's managing director, stated that the adaptation of the terrace was another project in the Humanization program Poniente Contigo. It is meant to reduce stress and anxiety that children feel when admitted to hospital. The terrace also offers them the opportunity to play outside in a controlled area, attached to the care area, and complementing other resources such as the Hospital Classroom>>.

The Pediatrics terrace features adapted furniture and padded flooring. There is also an awning. A mural was created by Nauni (Raul Mostno Lopez), a graffiti artist who previously worked with the center to decorate other spaces.

Poniente University Hospital hosted 2,274 babies last year. 310 children were admitted to Paediatrics with an average stay of three days. There were 366 children treated in the Short Stay Unit, 259 babies admitted to Neonatology, and over 7,200 people who received Outpatient Consultations.

‹ ›
Keywords:
AreaPediatriaPonienteInauguraTerrazaJuegos
Your comment has been forwarded to the administrator for approval.×
Warning! Will constitute a criminal offense, illegal, threatening, offensive, insulting and swearing, derogatory, defamatory, vulgar, pornographic, indecent, personality rights, damaging or similar nature in the nature of all kinds of financial content, legal, criminal and administrative responsibility for the content of the sender member / members are belong.
Related News