A Swiss Guard passes out briefly in front of the Pope

The Swiss guard collapsed suddenly, face down, causing a great crash with his halberd and helmet. 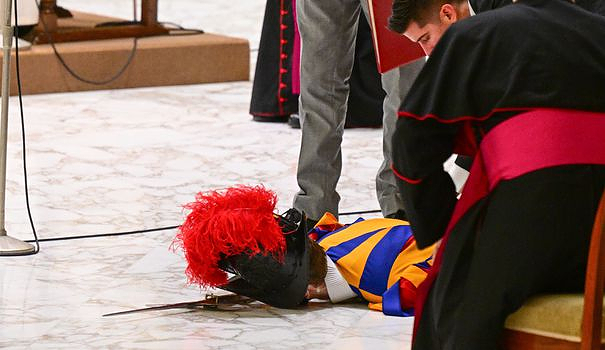 The Swiss guard collapsed suddenly, face down, causing a great crash with his halberd and helmet. He was immediately rescued by the people around him, who helped him up. The episode only lasted about twenty seconds.

On the images of the incident, we can see Pope Francis, seated on his large armchair upholstered in white fabric, watching with a worried eye behind his glasses the young guard in a colorful uniform coming back to himself.

After two minutes, the time to regain his senses, the Swiss guard was accompanied out of the Paul VI room.

Asked by AFP about the causes of this malaise, the Vatican invoked a "probable drop in tension". "He's fine," he said.

Still, the famous uniform of the Swiss Guards with blue, yellow and red stripes is not very suitable for the summer heat: in addition to a helmet decorated with feathers, it consists of gaiters, baggy trousers and a white collared jacket.

According to an AFP photographer on site, Pope Francis spoke at the end of the audience with one of the Swiss Guards, which he usually never does.

The Swiss Guard, responsible for ensuring the safety of the Pope and the Vatican, is the oldest army in the world: it was created in 1506 by Pope Julius II.

In March 2013, several Italian media reported an unusual episode that occurred in the Vatican. Pope Francis leaving a room at dawn questions a Swiss guard: "You stayed up all night, my son?" The pope then retraced his steps and returned with a chair. The guard had protested, saying that it was forbidden by the regulations, but the pope had reassured him and he had complied.