A North Korean ballistic missile flew over Japan, which is asking some of its residents to evacuate

The missile led to a rare activation of the J-Alert system, which appeared on the screens of national broadcaster NHK, calling on residents in the north and northeast of the archipelago to take shelter. 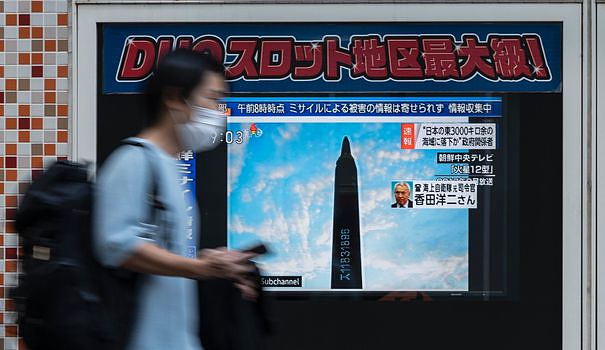 The missile led to a rare activation of the J-Alert system, which appeared on the screens of national broadcaster NHK, calling on residents in the north and northeast of the archipelago to take shelter.

"We are analyzing the details but the missile passed over Japan's Tohoku region (northeast) and then fell into the Pacific outside Japan's exclusive economic zone."

He said no damage or injuries were reported from the shooting, which Prime Minister Fumio Kishida described as an "act of violence".

"North Korea appears to have launched a missile. Please evacuate to buildings or underground," the alert read.

About 30 minutes later, the Prime Minister's Office then tweeted that "a projectile that appears to be a North Korean ballistic missile likely flew over Japan."

In a statement, the Japanese Coast Guard said the missile appeared to have already landed at sea and urged ships not to approach fallen objects.