Pyongyang's last missile launch over Japan was in 2017, at the height of the "fire and fury" period when North Korean leader Kim Jong Un and then-US President Donald Trump exchanged insults. 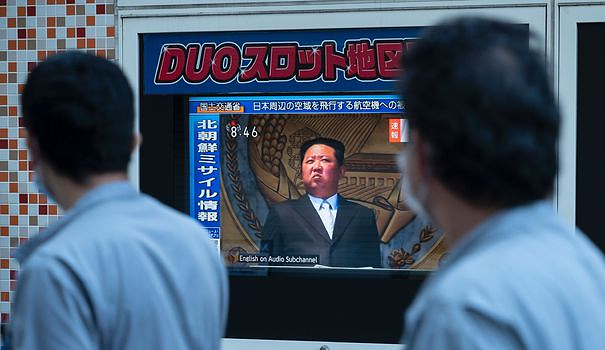 Pyongyang's last missile launch over Japan was in 2017, at the height of the "fire and fury" period when North Korean leader Kim Jong Un and then-US President Donald Trump exchanged insults.

On Tuesday, the South Korean military said it detected the firing of a medium-range ballistic missile, which flew over a distance of about 4,500 km at an altitude of 970 km, at a speed close to Mach 17, flying over Japan to the east.

"The exact details are being thoroughly analyzed in cooperation with the United States and the international community," the South Korean Joint Chiefs of Staff said in a statement.

South Korean President Yoon Suk-yeol promised a "firm response" and taking "appropriate measures in cooperation with the United States and the international community".

"A ballistic missile likely passed over our country before falling into the Pacific Ocean. This is an act of violence that follows recent repeated firings of ballistic missiles. We strongly condemn it," he said. Prime Minister Fumio Kishida told reporters.

According to Japanese Defense Minister Yasukazu Hamada, it could be a Hwasong-12 missile, launched by Pyongyang "four times" in the past. If so, this shot would mark a new distance record, Tokyo estimating it at around 4,500 km.

With talks with Pyongyang stalled, nuclear-armed North Korea has stepped up its weapons modernization plans this year, including a record number of weapons tests.

In particular, it launched an intercontinental ballistic missile (ICBM) for the first time since 2017 and reviewed its legislation to make its status as a nuclear power "irreversible".

The firings came as Seoul, Tokyo and Washington on Sept. 30 conducted trilateral anti-submarine drills for the first time in five years, days after U.S. and South Korean naval forces conducted large-scale maneuvers. wide off the peninsula.

US Vice President Kamala Harris, who was in Seoul the day before, visited the demilitarized zone (DMZ) between the two Koreas, on a trip to underscore Washington's "unwavering" commitment to defending South Korea. South versus North.

North Korea, which is subject to UN sanctions for its weapons programs, generally seeks to maximize the geopolitical impact of its tests by choosing the moment that seems most opportune.

"If Pyongyang fired a missile over Japan, it could represent a significant escalation from its recent provocations," said Leif-Eric Easley, a professor at Ewha University in Seoul.

"Pyongyang is still in the midst of a cycle of provocations and tests," he added.

"Mr. Kim's regime is developing weapons such as tactical nuclear warheads and submarine-launched ballistic missiles as part of a long-term strategy to overtake South Korea in an arms race and sow the discord between the allies of the United States," he added.

South Korean and American officials have been warning for months that North Korean leader Kim Jong Un is preparing to conduct another nuclear test.

It could be conducted after the next congress of the Chinese Communist Party which begins on October 16, several senior officials of the American command for Asia-Pacific indicated this weekend.

The idea that North Korea has a nuclear weapon is all the more worrying because, unlike other nuclear powers, the Pyongyang regime does not consider this kind of weaponry as a deterrent never be used.

Pyongyang has tested atomic bombs six times since 2006. The latest and most powerful test came in 2017, with an estimated yield of 250 kilotons.