A night under the stars on the beach - totally legal

Sleeping on the beach - that was forbidden for a long time. 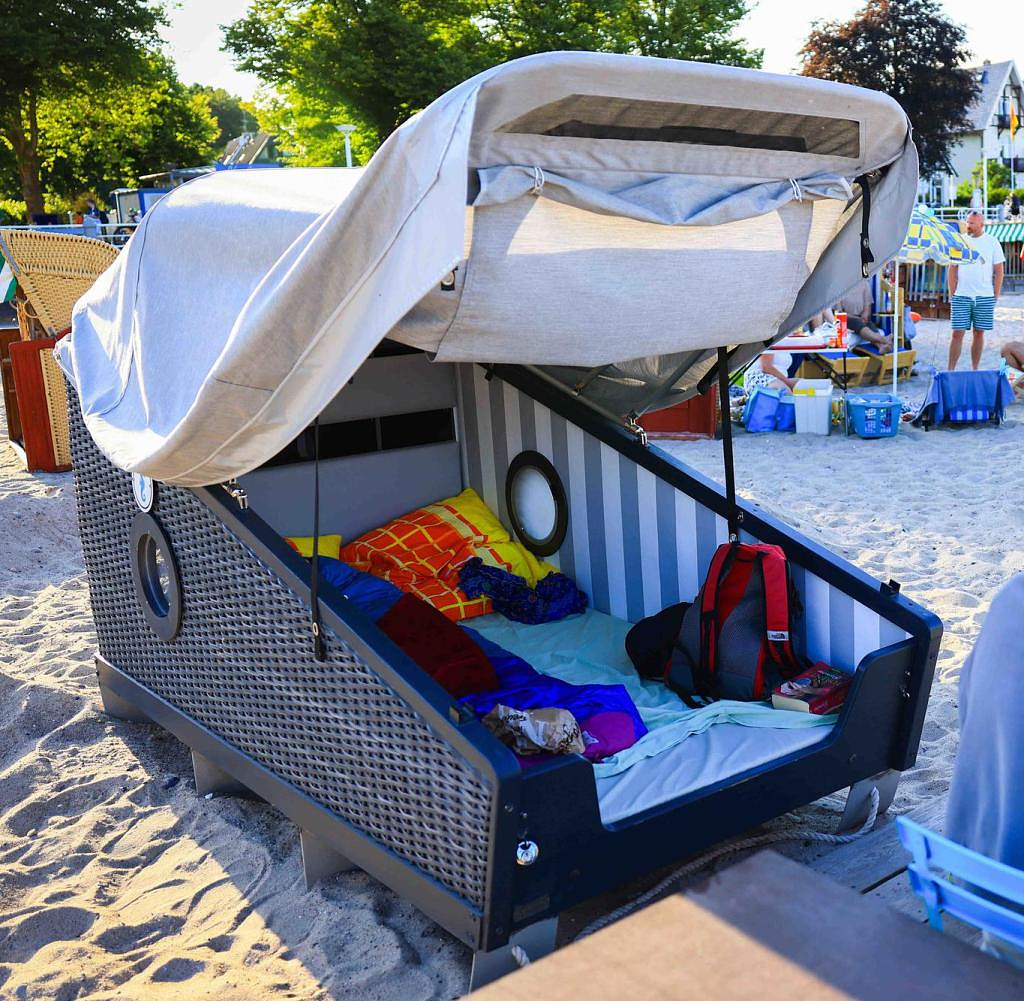 Sleeping on the beach - that was forbidden for a long time. Anyone who did it anyway and was caught doing so often had to deal with the regulatory authorities. But that was over in 2016. Since then there have been a total of 53 sleeping beach chairs at 17 locations on Schleswig-Holstein's North Sea and Baltic Sea coasts. Guests can stay overnight in it – completely legally and also very comfortably.

"It was a great experience and we slept wonderfully," says Wiltrud Sadlowski. The 72-year-old spent a night in a sleeping beach chair on the beach in Travemünde with her friend Marion Schleevoight. “We watched the huge full moon from the basket and were woken up the next morning by the rising sun and went swimming early,” enthuses the pensioner from Göttingen.

The beach furniture was developed in 2014 by the Schleswig-Holstein Tourism Agency (TASH) as part of an image initiative. According to TASH, the eight sleeping beach chairs that were set up in six places on the Baltic Sea coast in 2016 have now grown to 53 in 17 different places. In the meantime, you can also spend the night in a beach chair on the North Sea coast and even in the Sachsenwald near Hamburg.

On the North Sea island of Föhr, for example, there are currently five of these special baskets. "One is on the beach at Wyk and two each (are) in Nieblum and Utersum," says Heike Link from Föhr Tourismus GmbH. "Demand is very good at all locations, even if it always depends a bit on the weather," she says. According to Link, the baskets are always only rented out for one night. "It shouldn't be in competition with vacation rentals."

You can also spend the night in sleeping beach chairs on the North Sea coast of Lower Saxony. For several years there have been such offers at several holiday locations - including in Wangerland, Dangast, Bensersiel and on Norderney. "In July and August, our sleeping beach chairs are fully booked every day," says an employee of Wangerland Tourism. A night for two on the beach is also a popular wedding gift.

According to TASH, there are a total of 24 sleeping beach chairs in Lower Saxony and two in Mecklenburg-Western Pomerania. The prices are between 50 and almost 100 euros per night and basket, in which a maximum of two people can sleep. In some places bed linen is included in the price, in others guests have to bring sleeping bags or their own bedding.

In any case, Sadlowski and her friend are certain: “It's a real experience. We'll be back to spend the night in the sleeping beach chair," say the women from Göttingen.

Price increases are evident not only at home, but also at the holiday destination. The high inflation, but also increased raw material costs are passed on to the vacationer.

‹ ›
Keywords:
StrandurlaubOstseeNordseeRegionenporträtsDeutschlandLänderporträtsSchleswigHolsteinFöhr Tourismus GmbHSternenzeltNorderneyTASHNordseeinsel FöhrWangerlandReiseMarion SchleevoightTravemündeSachsenwaldMeeresrauschenSchlafstrandkörbeSchlafstrandkorbWiltrud Sadlowski
Your comment has been forwarded to the administrator for approval.×
Warning! Will constitute a criminal offense, illegal, threatening, offensive, insulting and swearing, derogatory, defamatory, vulgar, pornographic, indecent, personality rights, damaging or similar nature in the nature of all kinds of financial content, legal, criminal and administrative responsibility for the content of the sender member / members are belong.
Related News