"We can clearly see the quality of the repair": in the operating room, a ten-month-old girl undergoes open-heart surgery and doctor Khaled Hadeed does not hide his satisfaction. 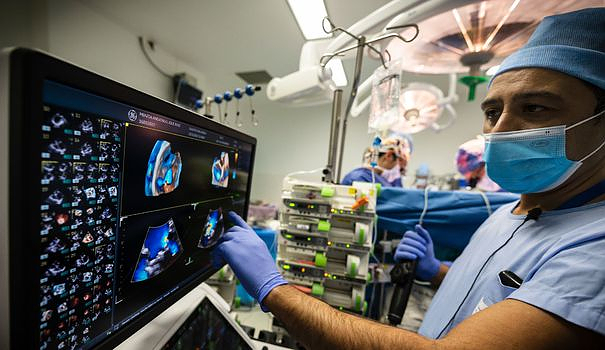 "We can clearly see the quality of the repair": in the operating room, a ten-month-old girl undergoes open-heart surgery and doctor Khaled Hadeed does not hide his satisfaction.

The new probe enabled this cardiologist from the Toulouse University Hospital, one of the first hospitals in the world to use it, to know with great precision the result of the operation even before it was finished.

The surgeon, Davide Calvaruso, has just redone the partition separating the left and right parts of the heart, where two perforations allowed blood to pass. He also repaired the valves of this vital organ.

Towards the end of this delicate intervention of several hours, the faces of the caregivers turn to the control screen of the probe which, from the esophagus of the little patient, sends the images of the ultrasounds of the heart in two or three dimensions.

"Here we look at the valve which was repaired by the surgeon with the sutures which were made (...) We will judge the functioning of the valve and the quality of the repair more easily by doing the 3D echo than the classic two-dimensional echo", explains Dr Hadeed, in front of the moving images.

This examination makes it possible in particular to know whether any "residual lesions" must still be repaired immediately, adds Dr. Calvaruso.

This morning, this is fortunately not the case. Everything went well for the little girl.

More than fifteen children, including from abroad, have already benefited from this medical advance at the Toulouse University Hospital since September.

Until then, this type of three-dimensional probe was reserved for adults: it could only be used to examine patients weighing at least 35 kilos.

From now on, the miniature probe makes it possible to carry out the examination even on children, from five kilos. And, it can also be used upstream of a possible operation.

Eight out of 1,000 babies are born with heart defects in France.

“We have been waiting for it for more than ten years because the three-dimensional is a way of better specifying the heart defect of the child”, explains the pediatric cardiologist Philippe Acar.

- Tens of thousands of euros -

For the moment, it is loaned by General Electric, which has been marketing it for two months, according to Carolina Bonilla, biomedical engineer of the American industrial group, also present at the block.

The Toulouse University Hospital is not immediately in a position to devote the tens of thousands of euros necessary for the purchase of this probe, specifies Professor Acar.

In the meantime, the "somewhat voluntary partnership" with General Electric allows him to use it from time to time, he explains, the probe being shared with other French or European hospitals.

This loan system has its drawbacks: thus that morning, a delay in the private carrier bringing the probe from Madrid prevented a preliminary examination from being carried out. Arrived during the intervention, it was however able to be used afterwards.

Before it, only probes allowing two-dimensional images existed for children.

But moving to 3D was not easy: "It is very difficult to miniaturize the crystals that send ultrasound" from the probe to perform ultrasound in three dimensions, says Carolina Bonilla.

"You need a lot more crystals for 3D, she adds. It's much more complicated!"