These are rare occasions you should not miss. 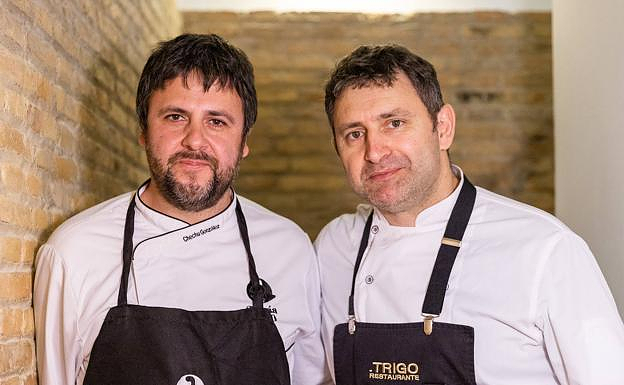 These are rare occasions you should not miss. It is a luxury to have Michelin-starred chefs come to Granada for restaurants such as Maria de la O or Lemon Rock. This allows us to explore other cuisines and offers new culinary options.

Victor Martin, a Valladolid restaurant owner of Trigo, was awarded a Michelin star as well as two Repsol suns. He spent the day in Maria de la O, working hand in hand to prepare food with Chechu Gonzalez. "What a racket! The man from Valladolid spoke naturally and clearly, and he smiled from ear to ears at the end.

Chechu Gonzalez and his crew found it a great opportunity to share the knowledge and experience of an award-winning chef. They also shared a passion about broths and stocks which is a key element of Maria de la O’s gastronomic proposition.

The four-hand menu opened with the crispy marinade and shrimps from Motril By Chechu. This was accompanied by Victor's cold Torrezno. The Escabeche de pijota and gordal was the main course. This dish is sure to blow your mind, and it will be on Maria de la O’s menu. In honor of the season, the pucelano served Asparagus with almonds and sea stalk. The main course was dominated by the green pepper, sturgeon and beluga hummus (another Chechu recipe). The guest chef chose a surprise tendon, spring mushrooms, and chickpea Miso. The other outstanding dish of the evening was Castanetas de iberico5J y parsnip from Gonzalez.

Victor served a Castilian Pinon as dessert, while Chechu surprised the crowd with an original Bavaroise, a delicious creation that will get people talking.

‹ ›
Keywords:
EstrellaMichelinMaria
Your comment has been forwarded to the administrator for approval.×
Warning! Will constitute a criminal offense, illegal, threatening, offensive, insulting and swearing, derogatory, defamatory, vulgar, pornographic, indecent, personality rights, damaging or similar nature in the nature of all kinds of financial content, legal, criminal and administrative responsibility for the content of the sender member / members are belong.
Related News