"I'm working hard to get it into circulation before the end of this month. 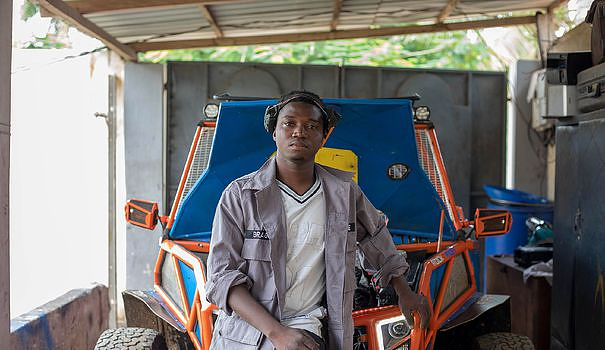 "I'm working hard to get it into circulation before the end of this month. There are only small technical adjustments left," says the 25-year-old.

In Togo, "Raouf" - as his friends call him - is very well known for his Raptor car, which he built in the image of Can-Am off-road sports vehicles. All this, thanks to tutorials on the Internet and from recycled materials.

"I'm a sports car enthusiast, but I don't have the means to buy them because they are expensive. So I decided to make one to my liking", says the young man proudly, seated in the steering wheel of his car in blue-orange colors.

He started building the Raptor in April 2021 and finished it in December: "The beginning was not easy. But by dint of thinking, searching and watching videos on the net, I built my car."

Self-taught, Raouf, who has never had any training in mechanics, has been tinkering since childhood. "I made small cars and bicycles using wooden rods, scrap sheet metal sheets and iron wires."

This resourceful person started very early in the repair of mobile phones in 2016, after his literary baccalaureate. An activity that allows him to set aside and finance his projects.

To build the Raptor, he invested more than 3.8 million F.CFA (5,800 euros). As for the finishing tricycle, it has already cost him nearly 2 million CFA francs (3,000 euros). And these machines have a mark: RAF-X, which derives from Raouf.

"Little by little, I'm realizing my dream. And I'm convinced to go all the way," insists Raouf, in the midst of young people gathered around his car parked on a large boulevard in the capital.

"I admire the young man every time I meet him in his car. He is a model for me, a source of great pride," smiles Agouba Djima, a software engineering student at a private university in Lomé.