A gloomy new year in Ethiopia, between renewed conflict and galloping inflation

At a cattle market in the capital Addis Ababa, the multiple crises facing Africa's second most populous country were on everyone's lips. 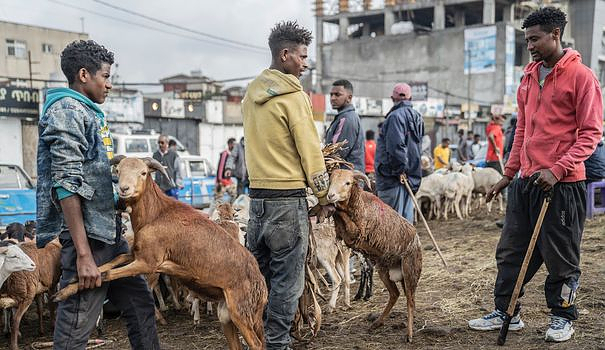 At a cattle market in the capital Addis Ababa, the multiple crises facing Africa's second most populous country were on everyone's lips.

"As you can see now, everything is expensive. If there was peace, it wouldn't be like this," trader Endashew Denekew told AFP on Saturday on the eve of Ethiopian New Year celebrations. known as Enkutatash. "People stayed at home and did not come to the market to sell their cattle."

Fighting resumed last month between Prime Minister Abiy Ahmed's army and the Tigray People's Liberation Front (TPLF) rebels, breaking a five-month truce that had raised hopes for a peaceful resolution to the war between them. for nearly two years.

This new escalation as well as the current economic context are "very worrying", underlined the World Bank in a pessimistic report on Ethiopia published on September 8.

“Multiple conflicts combined with a historic drought and other shocks have severely affected millions of Ethiopians, jeopardizing the progress in economic and social development the country has made in recent years,” added the Minister. institution.

In early September, the United Nations Office for the Coordination of Humanitarian Affairs (Ocha) described as "disastrous" the humanitarian situation in Ethiopia, where 20 million people need aid.

With a population of 115 million, Ethiopia has seen one of the fastest growths in the world over the past 15 years, according to the World Bank, but like many it has been hit hard by the coronavirus pandemic. Covid-19 and the fallout from the war in Ukraine.

In July, inflation reached 33.5%, according to official figures, and 35.5% for foodstuffs, an increase which dissuades people from spending.

"There are not the usual crowds that you see in the market during the holidays," an official, Chombe Gebrehana, confirmed to AFP near the main open-air market in the capital.

"Inflation has had its impact. If people had enough money in their hands (...), we would not see so little attendance".

In a recent interview with the state-run Ethiopia News Agency, Mamo Mihretu, political adviser to Abiy Ahmed, assured that the government was doing its best to mitigate the impact of the soaring prices.

"Our efforts are paying off as inflation, if not fully contained, is stabilizing," said Mihretu, who also heads the country's sovereign wealth fund.

The government is working on reforms to promote investment and trade, and expects economic growth of 6% this year, he added.

The resumption of hostilities in the north is also worrying the international community, which is stepping up diplomatic efforts to try to put an end to the violence.

"May the parties to the conflict have the courage to choose talks over fighting, and to participate in an African Union-led process that produces lasting peace," said the US envoy visiting the Horn of L Africa, Mike Hammer, in a New Year message to Ethiopians.

In the meantime, at the cattle market in Addis, few customers can afford to cook a festive meal. They too deplore the ongoing war, hundreds of kilometers from their homes.

"I think that if peace returns to the country, prices will go down."