A German beach among the "Best Beaches" in the world

Which beaches are the most beautiful in the world if you want to travel in January? And what are the ideal destinations for February? The American television channel CNN has put together an annual planner of the "Best Beaches" on earth*. 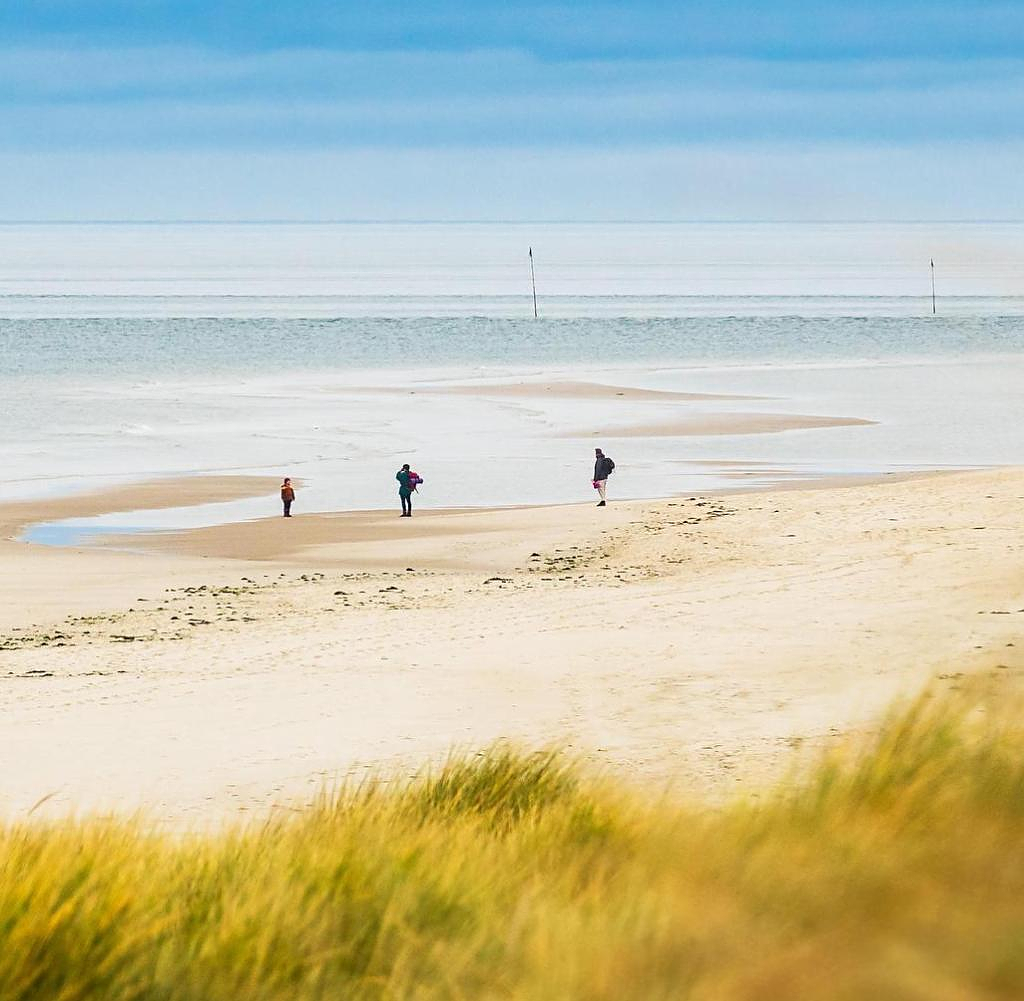 Which beaches are the most beautiful in the world if you want to travel in January? And what are the ideal destinations for February? The American television channel CNN has put together an annual planner of the "Best Beaches" on earth*.

Four to five beaches in different parts of the world are recommended per month. Some are due to destinations such as Australia or southern Africa, which are currently difficult to travel to due to Corona. But there are also quite a few in Europe - and for July the Americans, who themselves have plenty of dream beaches, are even praising an island in Germany, which is so far away for them.

We've picked a top beach for each month - a timeless calendar to dream and plan for this year or next.

Fine sand, gently rolling, with tropical greenery and azure water: Gokarna Beach in the Indian state of Karnataka is the stuff of globetrotter dreams. “Many beaches in India have been touted as 'the next Goa'. The only one that comes close to that claim is Gokarna,” judges CNN.

Plus, there's more to it than just chilling on the beach: the famous Shiva Temple draws pilgrims to this special place, which is shrouded in legends of Hindu gods. Gokarna's beaches also include Kudle Beach and three others dreamily named Om, Half Moon and Paradise, each with their own charm.

You can stay in simple beach huts or in a comfortable spa resort. Ayurveda massages and yoga classes are available right on the beach.

It is one of the iconic beaches of the American continent. Gangsters and artists, movie stars and starlets, bodybuilders and models, roller skaters, revelers and families have romped around Miami Beach's most famous and southernmost beach for decades.

SoBe, as the locals affectionately call South Beach, brings together cool nightclubs, gay bars, high-end restaurants and art galleries. Ocean Drive, where fashion designer Gianni Versace was shot dead in 1997, leads through the legendary Art Deco district with around 800 well-preserved buildings from the 1920s and 1930s.

American insider tip: Go to the beach before 9 a.m. and you'll have it pretty much to yourself, save for a few tanned joggers and yogis.

Only your head is sticking out of the hot sand: The coastal town of Ibusuki on the Satsuma Peninsula is known throughout Japan for its soothing sand sweat baths. Dressed in a special kimono, guests lie down in a hollow on the beach and are buried up to their necks in the dark volcanic sand. The cure is supposed to detoxify the body, beautify the skin and help with joint and back pain.

The sand is very warm due to the thermal springs below, and the sound of the waves is good for the soul. A water bath in the traditional thermal springs, the onsen, of which there are several here, is also beneficial. Some offer spectacular views of Mount Kaimon, also known as Satsuma-Fuji because of its resemblance to Japan's most famous mountain.

A culinary curiosity is the specialty Somen Nagashi. Hot, thin noodles whiz down a bamboo gutter while they are being cooled in water and have to be cleverly caught with chopsticks. In the local restaurant "Tosenkyo Somen Nagashi", on the other hand, they whirl around in circles in a bowl, and there are several attempts to catch them.

Strictly speaking, they are not beaches at all, admits CNN itself. Despite this, the channel couldn't resist including the natural sea pools of Porto Moniz on the island of Madeira in the Best Beaches selection.

But they are also really something very special. The pools were formed more than 6000 years ago when hot lava flowed into the sea and cooled off during a volcanic eruption. The water in the pools is heated by the sun, the average temperature (summer and winter) is 20 degrees.

Atlantic waves are constantly washing in fresh water, and if you take swimming goggles with you, you can watch small fish while bathing. Years ago, the English newspaper "The Guardian" put the sea pools at the top of their top ten most beautiful seawater pools. The village of Porto Moniz is picturesque and offers cafes and places to stay.

"No other beach is so well connected to one of the coolest cities in Europe," enthuses CNN about Barcelona's Platja de Sant Sebastià. In fact, it is just a stroll away from the old town. Along with Barceloneta Beach, this is the oldest beach in Catalonia's capital.

Today you can find everything here for a contemporary beach holiday, whether deck chairs, showers and toilets, water sports, bars or restaurants. Nude bathing is also allowed, with most nudists preferring Platja de la Mar Bella.

In total, Barcelona offers more than four kilometers of sandy beach fun. The closer you are to the center, the more locals and tourists crowd, but CNN praises the laid-back vibe even in the busier sections.

"One of France's best-kept secrets," praises CNN, and indeed the beaches of the picturesque rock town of Bonifacio on Corsica's southern tip are far less well-known than, say, those on the Côte d'Azur.

This is also due to the fact that there are not only easily accessible sandy beaches, but also some hidden bathing spots on the chalk cliffs. You have to find it first – like Odysseus, who, according to legend, landed here during his odyssey.

The fortress town of Bonifacio is enthroned 60 meters high on an offshore limestone plateau that forms a kind of peninsula - on one side white walls merge photogenic into the turquoise sea, on the other a 1600 meter long bay has formed. From this natural harbor you can walk to beaches such as Plage de la Catena or the fine sandy Plage de l'Arinella.

The North Sea island has apparently particularly impressed the US travel experts. As the only beach holiday destination in Germany, Amrum was included in the CNN annual planner of "Best Beaches". For the month of July it is in a league with four other world top summer beaches: Bliss Beach on Lake Tahoe in California, Polignano a Mare on the Adriatic Sea in Italy, Nissi Beach in Cyprus and Mkambati Nature Reserve in South Africa.

Those who know Amrum will not be surprised. The fine sandy beach on the open sea conveys the feeling of endless space. Ten kilometers long and up to two kilometers wide: the island boasts that Europe's largest bathing beach is located here on the Kniepsand, a sandbank in the North Sea, as well as the largest nudist beach.

What else impresses the Americans: the relative calm compared to Sylt, for example, the picturesque Frisian houses, the bird station, the year-round impressive nature (Amrum is in the middle of the Unesco World Heritage Wadden Sea) and the guided mudflat hikes to the neighboring island of Föhr.

Here the North Sea and the Baltic Sea meet so violently that bathing is dangerous and forbidden because of the currents: at the northernmost tip of Denmark, at the northern tip of Jutland north of the town of Skagen, lies one of the most spectacular beaches in the world.

The attractive coast is set in scene by a special light that also attracted the well-known Skagen painters, CNN raves about this "Best Beach". In fact, the area is among the sunniest in Denmark, and Skagen, where an artists' colony flourished in the 19th century, is still popular with painters today. Birdwatchers and other nature fans are also drawn to this area.

The tractor train "Sandormen" (German: "Sandworm") drives along the beach to the place where you can stand with one foot in the North Sea (sea area Skagerrak) and with the other in the Baltic Sea (Kattegat). The nearby beaches invite you to swim.

A beach in the middle of a white lunar landscape, surrounded by a clear, turquoise sea full of contrast - the beach on the island of Milos fascinated the CNN travel journalists so much that they voted it one of the best in the world.

Koh Kood, also spelled Koh Kut or Ko Kut, is not a beach but, like Amrum, an island, Thailand's fourth largest. However, since it was impossible to select one of the fantastic beaches on the approximately 150 square kilometer island because they all deserved the title "Best Beach", the entire island was put on the list without further ado, according to CNN.

The special thing is that they were not overcrowded even before Corona. The island bordering Cambodia isn't as easily accessible as Thailand's more popular destinations. Nevertheless, vacationers will find everything they need here, including a colorful underwater world for snorkeling.

In late autumn there is ideal bathing weather on the Canary Islands. Of the beautiful beaches on Lanzarote, however, the CNN testers particularly liked the Playas de Papagayo - not only because the beach coves there are particularly pristine and picturesque, but also because of a unique attraction.

The Museo Atlántico, opened in 2017, is Europe's only underwater sculpture park. The British artist Jason deCaires Taylor has placed impressive concrete sculptures on the seabed on the nearby beach of Las Coloradas, not far from the holiday resort of Playa Blanca, which are intended to serve as an artificial reef for nature. They can only be seen during a dive or a trip on a glass-bottom ship.

Friendly hosts, delicious food, soft sand, palm trees and the sea: If you want to escape the gloomy winter in Germany, Long Beach is the place for you. The beach on Vietnam's largest island, which lies in the Gulf of Thailand off the coast of Cambodia, stretches around 20 kilometers.

Vacationers will find a good infrastructure here with comfortable beach resorts, restaurants and opportunities for (under)water sports. At the same time, more than half of the island is protected as a national park, and you can discover authentic fishing villages and pepper plantations on excursions. In the evening you can enjoy a drink on Long Beach, which is known for its breathtaking sunsets.

*Article was first published in January 2022.

Even if many public holidays fall on a weekend again in 2022, you can still arrange your vacation days in such a way that you have as many days off as possible in a row. With these tips you can use the bridge days as efficiently as possible.