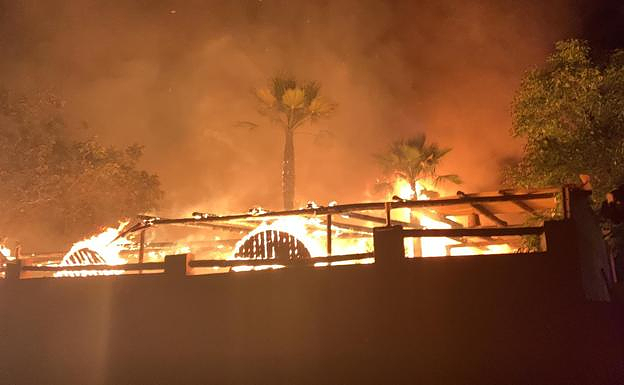 Several Granada Fire Departments drove to Camping Fuente del Lobo last morning at 4 AM. There, a fire broke out at the restaurant and chilled out area. Firefighters had to leave the campsite because of the smoke from the restaurant fire. According to firefighters, almost the entire area for eating and drinking was consumed.

According to Firefighters Granada, the fire didn't start in this restaurant's kitchen. No injuries were reported. Firefighters worked tirelessly to extinguish the flames, which only affected the restaurant and chill out areas. Civil Guard opened an investigation into the cause of this fire.

After the actions of firefighters, interior of the enclosure.

‹ ›
Keywords:
IncendioCalcinaZonaRestauranteCampingGranada
Your comment has been forwarded to the administrator for approval.×
Warning! Will constitute a criminal offense, illegal, threatening, offensive, insulting and swearing, derogatory, defamatory, vulgar, pornographic, indecent, personality rights, damaging or similar nature in the nature of all kinds of financial content, legal, criminal and administrative responsibility for the content of the sender member / members are belong.
Related News