A driver travelling ten kilometers in opposite direction, until colliding with a truck at Huercal Overa

The Civil Guard is currently investigating the case of a driver from Turre (Almeria) who collided with a truck while traveling more than ten kilometres in the opposite direction along the A-7 motorway. 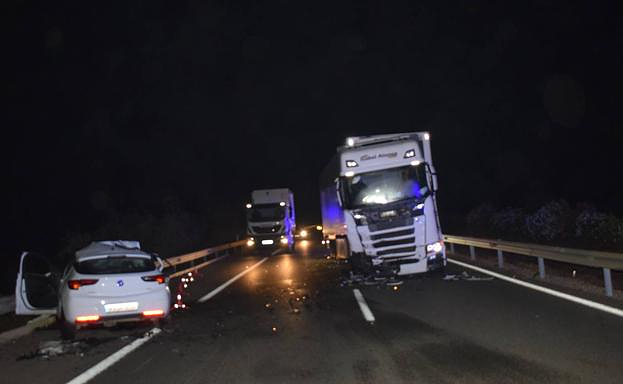 The Civil Guard is currently investigating the case of a driver from Turre (Almeria) who collided with a truck while traveling more than ten kilometres in the opposite direction along the A-7 motorway.

He is being charged with three alleged road safety crimes. The incident occurred at kilometer 688 on the A-7 motorway in Huercal Overa.

The Command reported that several people called in to report the collision between a car traveling towards Murcia on the Almeria lanes and an articulated truck traveling in the right lane.

The Vera Detachment sent a patrol to assist the victims. They also provided first aid for the drivers.

After a visual inspection, statements are taken from witnesses and those involved, the driver is investigated for driving while under the influence of alcohol, refusing to submit to drug and alcohol tests, and reckless driving.

‹ ›
Keywords:
ConductorCirculaDiezKilometrosSentidoContrarioChocarCamionHuercalOvera
Your comment has been forwarded to the administrator for approval.×
Warning! Will constitute a criminal offense, illegal, threatening, offensive, insulting and swearing, derogatory, defamatory, vulgar, pornographic, indecent, personality rights, damaging or similar nature in the nature of all kinds of financial content, legal, criminal and administrative responsibility for the content of the sender member / members are belong.
Related News