Crouched in his fortified checkpoint, he watched the comings and goings as he trained his binoculars on the front line in the Kherson region, a hot spot. 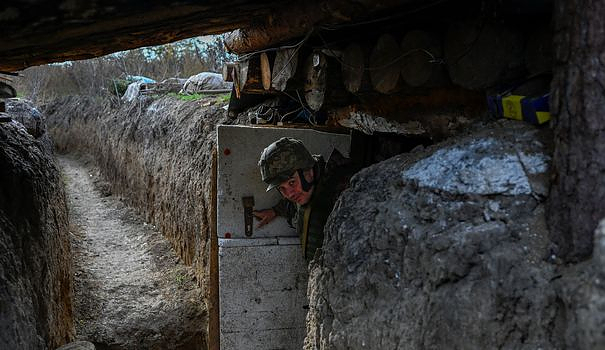 Crouched in his fortified checkpoint, he watched the comings and goings as he trained his binoculars on the front line in the Kherson region, a hot spot.

Something suddenly changed two weeks ago. "Fewer medical vehicles were crossing the bridge," says "Gres", a retired policeman now a soldier. "Something happened".

Without realizing it, this 51-year-old father of two may have witnessed a turning point in the fierce battle that has been going on for several months in southern Ukraine.

In September, the Ukrainians drove the Russians out of the northeast of the country. A similar feat around Kherson could prove even more painful for Russia, which has mobilized hundreds of thousands of reservists to stem this dynamic.

Taken by the Russians at the start of the war, Kherson and its region offer Moscow a strategic land link with the Crimean peninsula, annexed in 2014.

Its loss could pave the way for Ukraine to the commercially vital Sea of ​​Azov and threaten Moscow's stranglehold on Crimea.

The Russians have evacuated tens of thousands of civilians and sent reinforcements ahead of what could be a major battle as the conflict entered its ninth month.

But the lack of information on both sides about the surrounding areas means that no one really knows what the situation is on the other side.

"Gres", for example, has still not dared to take the few hundred steps between its checkpoint and the bridge that borders Kherson because of the unpredictable dangers.

Proof of this is: a plane, which "Gres" thinks could be Russian, flew over the area that morning and enemy artillery fire is still close.

Kherson remains always out of sight. "But she seems a lot closer than before," he said with a slight smile.

Olga Yassenko, 48, stands, hammer in hand, in front of the ruins of the school she ran before Russian forces took control of her village, Shevchenkove, at the start of the invasion and later being driven out by the Ukrainians last month.

Sign that times have changed, that morning, the village was bombed only twice, against ten times - if not more - before.

Faced with the arrival of the first snow, she is busy protecting the broken windows of the building to save what can still be in the deserted classrooms. "It's scary standing here," admits Olga, with a nervous chuckle.

Men from the village hoisted a Ukrainian flag on the damaged roof of the school.

"You have to be optimistic", says Oleksandre Romanstevitch, welder, after descending from a ladder against the school wall. "You just have to keep working and stay positive," said the 37-year-old.

The optimism displayed by the small troop may seem a bit illusory in this region hard hit by fighting, while Russian strikes have left millions of people without heating or electricity as winter approaches.

Ms. Iassenko, however, keeps smiling while fighting against tears at the mention of her 309 students of whom she has no further news.

"It's so hard to believe everything that has happened" since the end of February, she says softly.

Not far away, Leonid Souslov, sitting alone on his porch, says he too experienced significant trauma in his life, but long before the war.

This 63-year-old man lost his leg in an accident several years ago. However, he refuses to flee the fighting. "We are winning," he wants to believe.

Next to him, a former martial arts coach, "Fizrouk", does not want to doubt the outcome of the war either. "I come from Kherson and I still know a lot of people there. They are suffering," said the 36-year-old man, who came out of a hiding place just across the bridge that leads to the city.

"I keep telling them to hold on, that we are close."