A bill on means for security, in the hands of the Assembly

The kick-off of the exchanges will be given at 4:00 p. 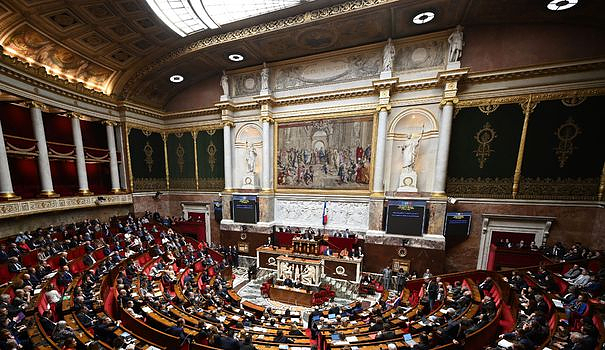 The kick-off of the exchanges will be given at 4:00 p.m., and they must last all week, with more than a thousand amendments to be examined.

The bill already passed a first round in October without a hitch in the right-dominated Senate.

"15 billion euros (...) we must measure what this means after the 10 billion euros of the previous five-year period", argues the Minister of the Interior Gérald Darmanin, who assures to appear before the deputies "l 'open mind".

If almost all parliamentarians support an increase in resources for the police, their direction raises questions, even antagonisms with part of the left.

"The stated priorities are not going in the right direction," insists LFI MP Ugo Bernalicis, whose group has planned to defend a prior rejection motion. "The objective is to put 30% more blue on the ground, by continuing the militarization of the police services", he criticizes.

"It is a text in direct line with the security laws of recent years", deplores Elsa Faucillon (PCF). “It is very far from the vision that we have of the ministry as an institution at the service of the public”, abounds the ecologist Sandra Regol.

The three groups are preparing to vote with a majority against the text.

Their socialist allies are starting from a less hostile position – PS senators voted in favor of the bill. But they have a series of grievances: "there is nothing about local policing, crime prevention, municipal police", lists MP Roger Vicot, for whom the "vision of the police" offered "poses problem".

Deprived of an absolute majority, the executive will therefore turn rather to the right to pass a text which is "timely and welcome" in the eyes of Eric Ciotti (LR).

After pointing out in committee at the Palais Bourbon "significant shortcomings in justice and immigration" in this bill, the deputy obtained almost a doubling of places in administrative detention centers for foreigners in an irregular situation.

The boss of the LR deputies Olivier Marleix generally sees in the Lopmi "useful measures to collect, but no large voluntary text".

On the National Rally side, "at worst it will be an abstention" and if not a favorable vote, we think within the group led by Marine Le Pen, where we hope that the government will give pledges.

Almost half of the 15 billion euros must be dedicated to the digital transformation of the ministry. Some 8,500 police and gendarme positions are to be created over the five-year term.

To combat cybercrime, the bill allows seizures of digital assets. It also provides for more severe penalties for sexist insult and includes several measures to simplify criminal procedure. Victims will be able to file a complaint by videoconference.

It is also planned to extend the fixed fine to around twenty offences. The deputies in committee added the case of the offense of obstructing road traffic, which the left sees as a disguised offensive against the actions of yellow vests or climate activists.

Senators have increased the penalties for violence against elected officials, urban rodeos and refusal to comply, while since the beginning of the year twelve people have died after police fire during refusal to comply.

Another sensitive point: while the political class is divided on the reception of the Ocean Viking with 230 migrants on board, the roadmap annexed to the bill evokes the strengthening of the prerogatives of the Frontex border guards, the European border surveillance agency. MEPs could debate it as early as Monday evening.

Finally, the very controversial reform of the judicial police is also addressed in this appendix. She has already invited herself into the exchanges in the Senate and Mr. Darmanin had tried to calm things down.